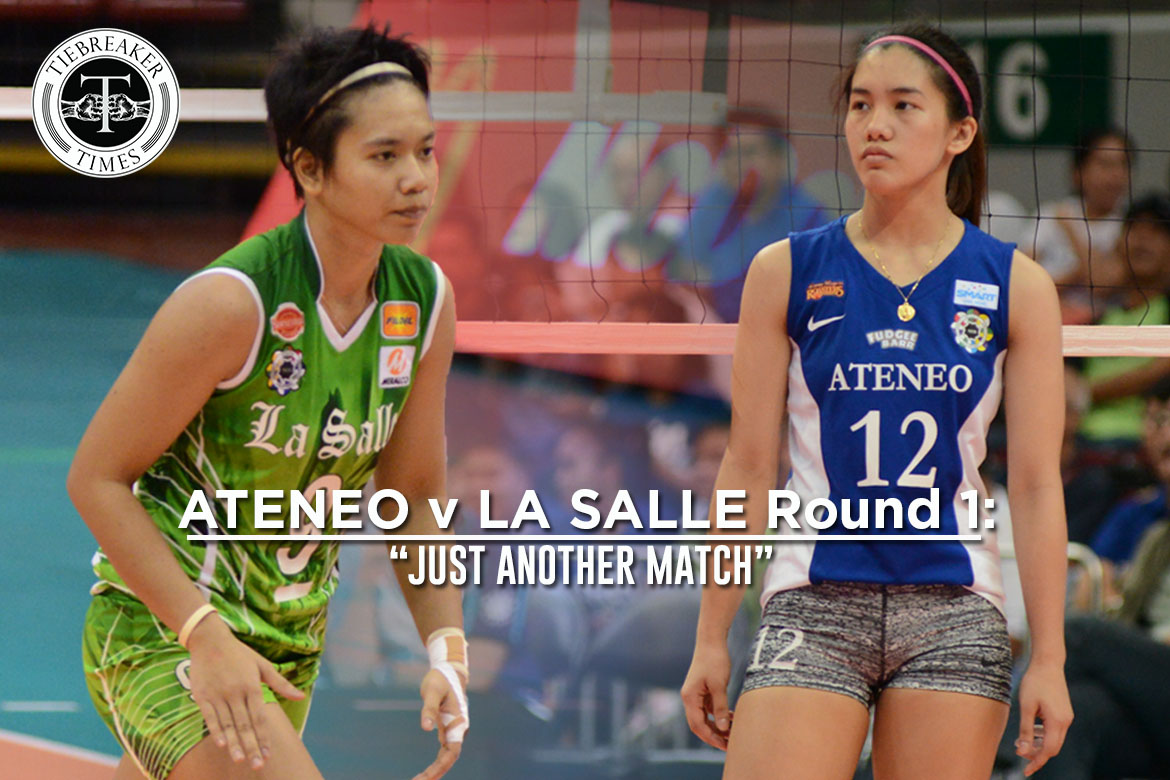 People don’t go gaga over “just another match” no matter how either the De La Salle University or Ateneo de Manila University try to put it off. Who would buy tickets online for up to 10,000 pesos for a regular volleyball match? No one does.

It just goes to show invested fans and alumni are to the Ateneo-La Salle rivalry. Volleyball might not be this famous in the country if one or both teams weren’t this competitive. Although this is just the first round, both teams can’t deny the amount of pressure there is to beat the other.

Here, we’ll breakdown the specifics of the most important match of the year. From skills to the match’s league-wide effect, we cover it in the following.

Serving can very well decide how tomorrow’s match will go.

There have been countless conversations about how the loss of Denden Lazaro and Ella de Jesus have affected the Lady Eagles. Those two were in the upper echelon of passers in UAAP history and cured a lot of headaches for Coach Tai.

This season, Ateneo went from using Gizelle Tan as a converted libero to discovering the gem that is Jamie Lavitoria. The California girl had been a fixture on the Ateneo bench in past leagues and never got any playing time until Tan struggled against FEU.

Having just served in the starting rotation for three matches, Lavitoria has already rocketed up to the top of the most efficient service receivers.

La Salle are currently the best serving team in the league. They do an amazing job picking their foe’s weakest passer and sending balls her way.

In La Salle’s thumping of the Adamson Lady Falcons, La Salle targeted the ailing Mylene Paat mercilessly. La Salle received many free balls and they were able to end the match in less than an hour and a half.

La Salle’s deadly serving from top to bottom will surely test if Ateneo’s reception has adjusted. Look for La Salle to try and get Alyssa Valdez involved in passing, as targeting the reigning MVP is the most effective way of limiting her back row attack chances and tiring her out.

Lavitoria will, for sure, have her team captain covered. But La Salle do an amazing job at forcing opponents to move to pass and Lavitoria hasn’t been challenged in that way before.

When the Lady Eagles do get a good pass, oh boy, do they make teams pay.

Ateneo setter Jia Morado is a savant. When most setters would give up on a bad pass and just set to the open hitter, Morado still finds a way to contort her body and make a play.

Her playmaking is evident in her spikers’ numbers. Alyssa Valdez is averaging a career-low in points per set and they’re still undefeated because four Lady Eagles are in the Top 20 of points scored (five in the Top 30). Jhoana Maraguinot has blossomed into the most efficient spiker in the league, ahead of Valdez and National University’s Jaja Santiago.

There are no weaknesses in this Ateneo rotation; they don’t rely on Valdez as much anymore. The reigning MVP has almost become a safety cushion – when their foes somehow manage to keep a set close, Valdez will put on her cape and save the Lady Eagles. She did it in their first match against the NU Lady Bulldogs, but hasn’t needed to save the team since then.

Out of anyone in the league, La Salle have the best chance of surviving Ateneo’s attack. They are the best digging and blocking team in the league. But blocking and digging the Lady Eagles are a whole different story. An on-point Ateneo team will give their foes very few predictable attacks.

READ  For Gonzaga, leading Army's veterans is a breeze

The best way for La Salle to win tomorrow is to match Ateneo’s attacking efficiency and maximize every opportunity (free balls, good receptions, rebounded blocks) they get. Ateneo are the seventh in the league in digging, as the sure-handed Denden Lazaro and Ella De Jesus have graduated.

MaJoy Baron has been a revelation for the Lady Spikers and she will surely get her touches, La Salle’s reception forgiving. It’s La Salle’s other spikers that need to step up.

Kim Fajardo is the best statistical setter in the UAAP, which supposedly means she’s the best at confusing opposing blockers and setting to a teammate with one or no blocker. But there have been times that La Salle often stalled and opponents took advantage.

The best example is against NU. The Lady Spikers got good passes and sets but just could not get kills in key moments. In a pivotal fourth set where they were leading 20-14, La Salle suddenly could not score a point. NU wound up taking the set and the match through Myla Pablo’s heroics.

And that is what La Salle lacks – a Myla Pablo- or Alyssa Valdez-type open hitter who can bail them out of scoring droughts.

Ara Galang was exactly that for the team last season, but she’s still getting back into her deadly form after tearing her ACL.

They need someone to catch fire tomorrow and finish off plays. La Salle can ill-afford to give Ateneo chance balls. The Lady Spikers have to go into the match with a kill-every-ball mentality.

Who needs the match more?

Asking either side about the importance of tomorrow’s match is futile – they’re both been through enough wars to put too much weight on an elimination round match. At least, they know enough to veil their thoughts in front of reporters.

So we’ll break it down here.

For Ateneo, getting another sweep of the elimination round sends them straight to the Finals again without the need for a Final Four.

One can say that Ateneo doesn’t need an early Finals ticket, and the extra match will help keep them sharp. But less matches also mean less chances for injury.

Ara Galang injured her knee in a do-or-die match against NU last season in the stepladder. Had La Salle just won their first match against the Lady Bulldogs, maybe Galang would have played in the Finals and the team would have had a chance.

While any coach will say that there are lessons that can only be learned through losing, there are also valuable incentives that their team can get through not losing.

Forget their winning streak, half the Lady Eagles weren’t even aware they had won 24 straight matches. A thrice-to-beat advantage in the Finals, however, is too good to pass up.

For La Salle, getting a win over the Lady Eagles gives them confidence. It’s different when La Salle lose to Ateneo.

When they lost to NU earlier this season, the team’s spirit was still high. Coach Ramil De Jesus even had time for a post-match presser.

But when La Salle lost to Ateneo last season, no one would talk to the media — at least, not immediately after the match. After their second round loss last season, De Jesus walked out of the dugout in tears.

Consider also that they have already lost to NU in devastating fashion. Another loss could drop them to third at the end of the first round if the Lady Bulldogs win all of their remaining matches.

La Salle have a proud program – not being able to beat Ateneo has really shaken their pride.

Again, this is just the first round. But this match has the weight of both teams and the league hanging in the balance.

If La Salle can’t beat Ateneo, then who can?

The last time Ateneo dropped a game in the UAAP