CARMONA, CAVITE — Over 38 matches spanning all three seasons of the PFF Women’s League, De La Salle University had evaded defeat. But that streak met its end last Sunday in Carmona, at the hands of Far Eastern University.

The stunning turn of events favored University of Santo Tomas, whose win against Maroons FC at the UP Diliman Field in Quezon City sees them close in on La Salle ahead of their final meeting on Sunday.

University of Santo Tomas’ Kristine Joy Abo-abo and Lalaine Durano picked up where they left off, virtually repeating their output from their previous match to beat Maroons FC, 5-0.

Like in their match against Stallion-Hiraya FC in the previous week, Abo-abo struck first, before registering a hat-trick in the 8th, 35th and 91st minutes. Durano likewise netted a brace of goals in between, in the 69th and 86th minutes.

Despite the clinical win against the hapless Maroons, Aging Rubio hardly felt impressed.

The victory, though, places UST within striking distance of De La Salle University, who is now only two points ahead of the Lady Booters from Espanya. With their last fixture reserved for the league leaders, Rubio must hope her team can raise their level in time.

UP hot on heels of Stallion-Hiraya after beating Tigers 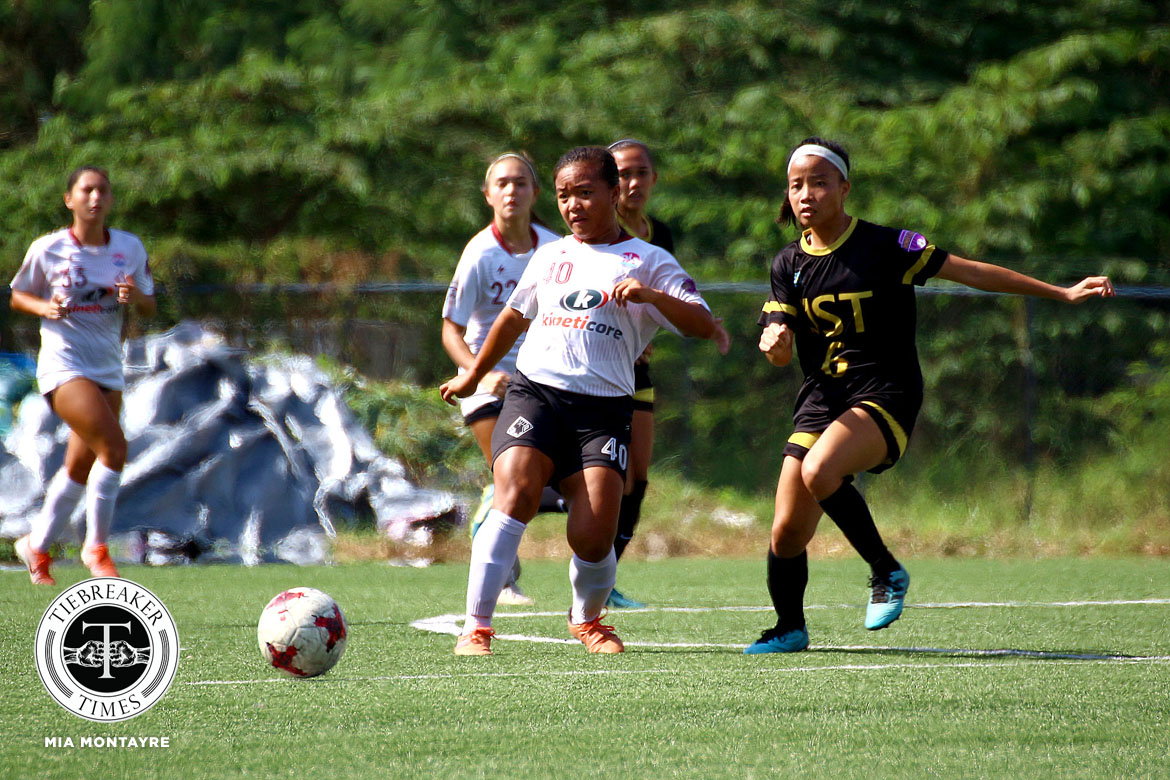 Five different players were on target for University of the Philippines after shooting down Tigers FC, 5-1.

Inspired by their seniors who played before them, upset-minded Tigers FC stunned the hosts when they scored the opening goal in the 13th minute via Judy Mae Prado. UP responded quickly, however, with Itsuko Bacatan equalizing three minutes later.

As if jostled by conceding a goal, the Lady Maroons kept up the pressure to force the go-ahead only after two minutes, when Judd Gonzales headed in a corner.

Bethanie Talbot also got her name on UP’s scoresheet with a searing shot from distance in the 30th minute. Abigail Corvera and Kamea Mangrobang then padded the score in the 75th and 91st minutes en route to their first win following a draw and a loss. Still, their mentor thought the team could have done more.

“Overall, not so satisfied with the performance coming from a very good performance against La Salle. We were hoping to really build from that and make some significant progress. We’re always after our own progress. We always remind them to play always at their best as if we are playing the best teams,” shared Anto Gonzales. 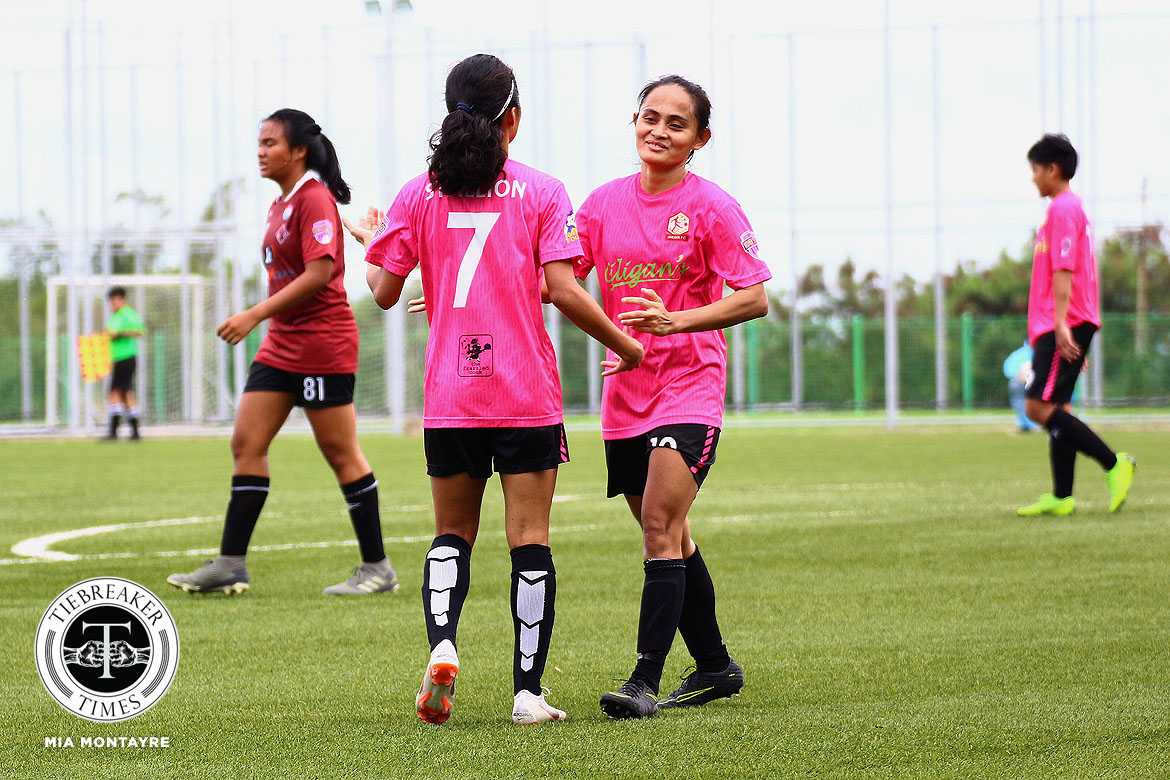 Stallion-Hiraya FC was able to nab a crucial 3-1 victory over Maroons FC after losing three matches in a row.

The Makati-based club would have faced relegation to the bottom half of the table had they not collected full points from this meeting against Maroons FC. Erika Casas ensured her side would get the victory after her 18th minute strike, while Aiza Mondero consolidated their lead three minutes later.

Determined that her team would not go down without a fight, Eva Barnes snuck a goal in first half added time to deny Haya Ibarra a clean sheet. Stallion-Hiraya sought to add more goals led by the inspired flanking runs of Camille Rodriguez, but could only produce one via Mondero again in the 73rd minute.

“I think it was an important win,” said Philip Dinglasan.

“We were talking about how we already worked so hard during the first part of the season, and then we don’t think it’s really logical to let go of the position that we’re in. We are very happy that we were able to get the three points today because UP is just two points behind us,” the tactician added.

Stallion-Hiraya stays in fourth place in the meantime. On the other hand, the Maroons end their season in last place with 9 points on 2 wins, 3 draws, and 13 losses. 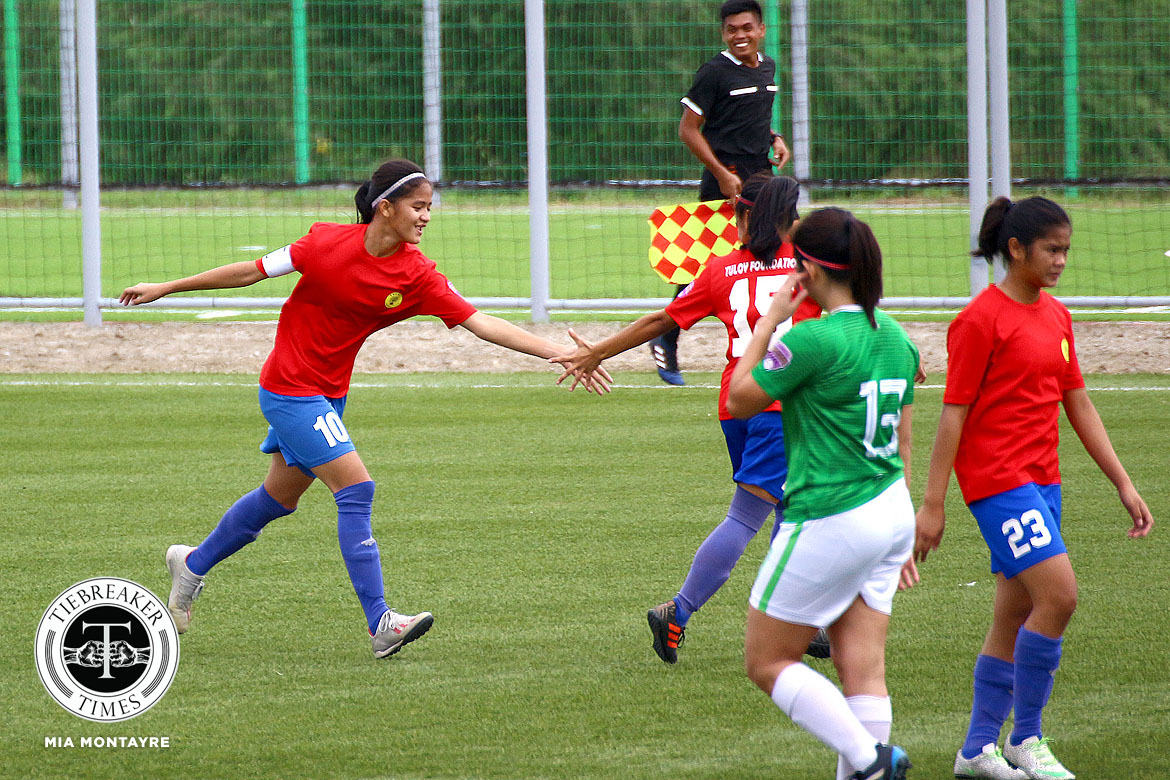 Disappointed that they would not get to finish the season in the top half, Tuloy FC went out with a bang after pummeling Green Archers United FC, 6-3.

Looking to finish strong, a win was the only thing acceptable for Tuloy. Fortunately, Jonalyn Lucban and Isabella Bandoja combined to see it through. Lucban needed only 7 minutes to knock in the opening goal, before her team captain doubled their lead two minutes later.

Both players eventually finished with hat-tricks. Lucban completed hers in the 30th and 46th minutes, while Bandoja got hers in the 82nd and 90th minutes.

Bandoja brought her final tally of goals to 30, a new league record that could see her picking up the Golden Boot award again.

GAU tried to rain on Tuloy’s parade when they pulled goals back via Chelo Hodges’ brace in the 57th and 69th minutes, and Stephanie Goñe’s contribution in the 76th minute. But the three points were more than enough for Tuloy to exit the season in sixth place on 8 wins, 1 draw and 9 losses.

“We did our best, and I know they did their best and they played great. Sobrang proud and sobrang saya,” Bandoja added.

At best, the Lady Tamaraws could only hope for a runner-up finish, but that did not deter them from pushing the Lady Booters from Taft to the edge. Twenty-five minutes in, Joyce Onrubia drove FEU ahead. Instead of relaxing, the Lady Tamaraws then piled on the pressure. Four minutes later they stunned the Lady Booters again when Mary Harriette Lam forced another goal to extend their lead.

Finding themselves in an unfamiliar position, La Salle rallied for a response. Veterans Sara Castañeda and Bea Delos Reyes spearheaded an attack, which led to Anicka Castañeda pulling the score back in the 36th minute.

But FEU countered with Samantha Green canceling out Anicka’s effort in first half stoppage. Anicka kept the rally alive when she struck again in the 55th minute, but ultimately Green’s goal held up to hand FEU the monumental win against rivals they could not defeat previously, even in recent seasons of the UAAP.

“I’m happy how the team is progressing every game, and my players are improving and learning. I do hope na maging consistent at mag-improve pa sila, especially papalapit na ang UAAP. PFFWL is a great preparation. We are focused on our players’ development in the game and in training. Dahan-dahan nabi-build up ‘yung confidence nila,” said coach Let Dimzon.

The loss puts La Salle in a precarious position at the top, with only a two-point advantage over UST. And with both teams meeting each other for their last fixture of the tournament, whoever wins the match will be named champions of season three.

The PFF Women’s League opens its season-finale on Saturday, February 15, at the Ateneo Moro Field where the University of the Philippines will take on Green Archers United FC at 10:30 A.M., followed by Nomads FC facing Tigers FC at 2:00 P.M.

On Sunday, February 16, at the PFF National Football Center in Carmona, Far Eastern University will clash with Stallion-Hiraya FC at 8:00 A.M., before the University of Santo Tomas and De La Salle University close the season out at 10:30 A.M.