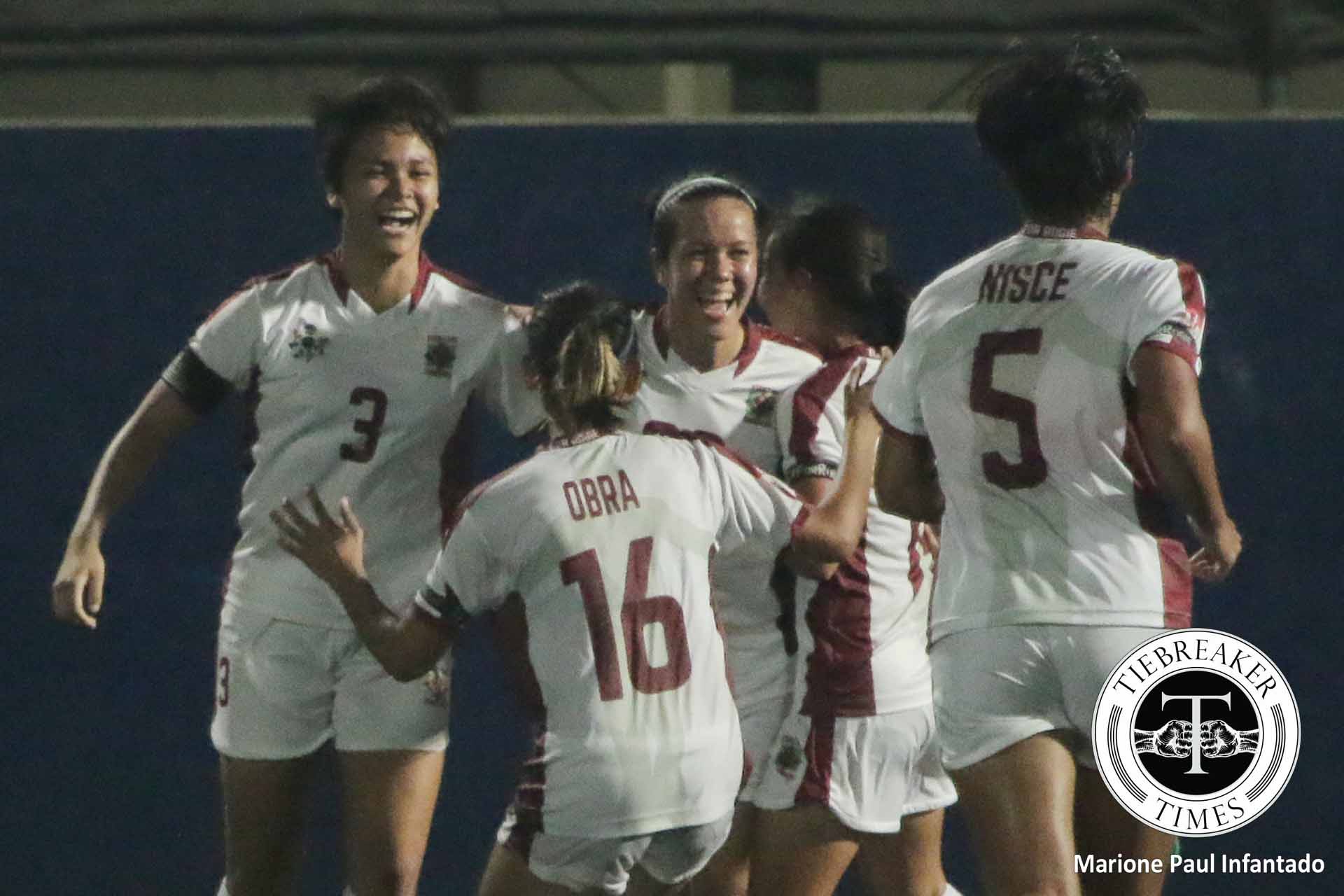 Late goals add drama in Football, especially if they win the match. That scenario perfectly played out tonight, March 19, 2016 (Saturday), at the McKinley Hill Stadium in Taguig. The University of the Philippines Lady Maroons defeated the University of Santo Tomas Growling Tigresses, 3-1, courtesy of second half goals from Mary Rose Obra (60′), Renee Dungca (86′) and Vanessa Alleje (88′). On the other hand, Niña Acuña scored for UST at the 12th minute.

A reinvigorated UST side displayed their intent to win early in the match. That intent was obvious early on when the Growling Tigresses won a free kick at the edge of the Lady Maroons’ box, which was then taken by Cara Corpus but her attempt was cleared by UP. Marie Lemoran and Jennizel Cabalan then had attempts on goal but both shots failed to properly threaten UP goalkeeper AJ Javier.

UST eventually scored the goal their good start demanded at the 12th minute. Javier failed to handle the corner kick well and a touch from Acuña was enough to put the ball at the back of the net. The Growling Tigresses were ecstatic as it looked like the break they finally needed this season would arrive.

The Growling Tigresses could have doubled their lead immediately if it weren’t for the Lady Maroons’ defense. Cabalan made a fantastic solo run towards the UP goal but she failed to direct her shot properly. Lemoran then made a run of her own, crossed it towards Kate Aguilar who’s shot was then easily saved by Javier.

While UP had virtually as much possession as UST, it was incision and not graft which was sorely lacking from the Lady Maroons. The Lady Maroons’ most dangerous player was Mary Rose Obra who had two good chances to score. The first of which came from a late run into the UST box. Obra attacked the far post and headed the ball but UST goalkeeper Ivy Lopez saved what should have been a goal. Obra then cut inside to a central position, turned and unleashed a shot but Lopez caught the tame attempt.

BG Sta. Clara had a chance to score for UP before halftime when she forced an error from UST center-back Chanda Solite but the former’s attempt was saved by Lopez. It ended, 1-0, in favor of UST at the break with the Growling Tigresses perhaps frustrated that they didn’t add more to their lead.

Come the second half, though, it was UP who bombarded the goal more. Even though UST had the better start when Acuña had a shot from outside and Cabalan went one-on-one, Javier dealt with both situations well and looked more assured in this period. That security allowed the Lady Maroons to push for an equalizer.

Cristina De Los Reyes shot wide and her attempt was a precursor of what was to come. After much probing, UP finally got the goal that they needed. Obra, again, was instrumental for the Lady Maroons at the right flank and her efforts were rewarded at the 60th minute. She cut inside from the right side, found herself in the UST box and calmly unleashed a shot which landed at the bottom left corner.

UP pushed on for the goals which would win them the match. Momentum was with their side. While possession was still 50/50, it was UP who had the end product this time. De Los Reyes had two attempts in succession but Lopez easily caught them. The UST defense was visibly rattled by UP’s relentless attack. The Growling Tigresses’ were forced into an error and led to a shot by Dungca but the latter failed to score.

Five minutes from time, UST had a golden opportunity to score. Cabalan found space for herself and unleashed a hot that was saved by Javier. Javier may have been at fault with UST’s goal but she more than made up for it with her strong second half performance. That chance of Cabalan, though, was the golden opportunity UST needed to win the match. The chance went begging and pushed a UP squad hungry for a win.

The Lady Maroons ultimately got the goals they wanted late, late in the match. Obra unleashed a shot which hit the left post and the ball got deflected towards Dungca who made no mistake to shoot at point blank range at the 86th minute. Just two minutes later, Alleje wrapped up all three points when she scored via a De Los Reyes assist.

It proved to be a good win for UP as games won late in the match would no doubt prove to be morale boosters in the long run. As for UST, it was a case of déjà vu as this was the second time this season they lost because of late goals. The first time was against the Ateneo Lady Eagles when they conceded two goals in the last ten minutes. Unfortunate to state but it’s a long way now for UST if they want to reach the finals.

While he wasn’t pleased with how his wards started, UP head coach Anto Gonzales was still happy with his team. “[The players] dug deep. Sobrang galit ako nung first half kasi kulang sa puso, kulang sa self-belief and they responded very well.”

The win elevated UP to 2nd place in the standings with 9 points while retained UST in last place with 3 points. Far Eastern University will be the next opponents for both teams. UP plays FEU first on April 3, 2016 (Sunday) at the McKinley Hill Stadium in Taguig. UST shall then play FEU at McKinley Hill on April 9, 2016 (Saturday).

Out From the Box: Honesty, Kindness, Sincerity are things we don’t get tired of