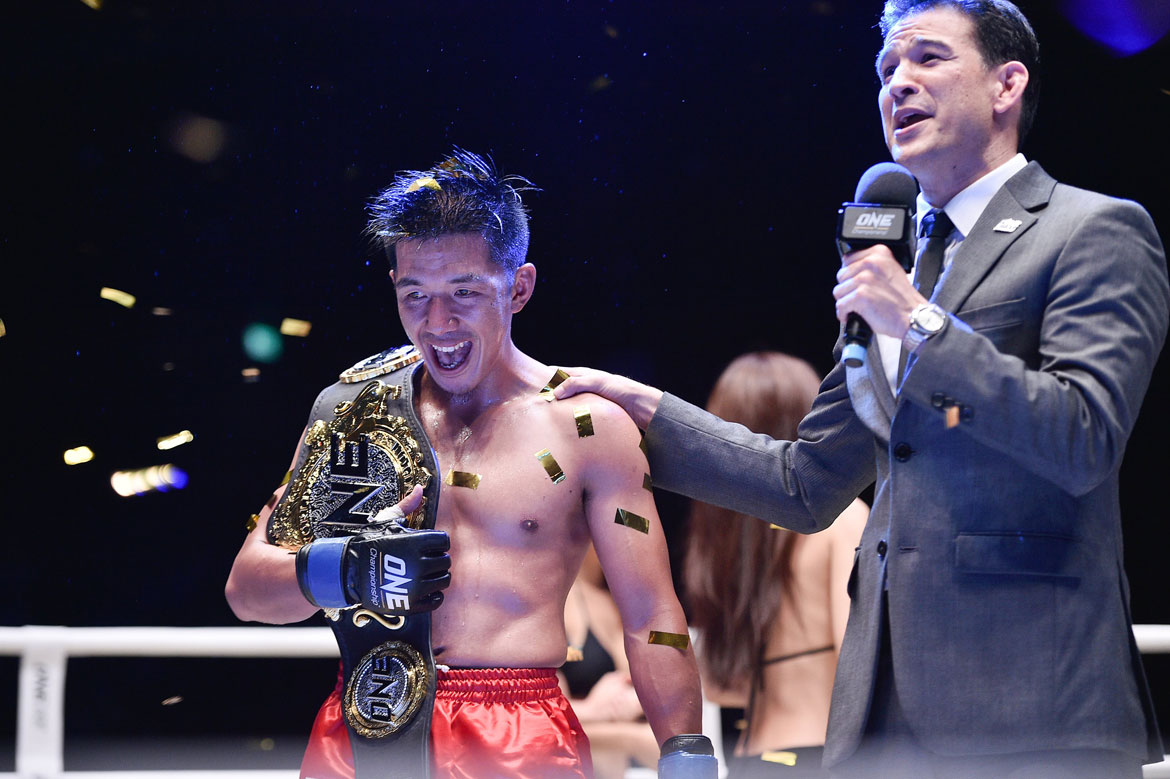 Geje Eustaquio cemented his status as the king of rematches.

In a hard-fought bout, Team Lakay prodigy Eustaquio managed to eke out a split decision win over past tormentor Adriano Moraes to unify the ONE Flyweight World Championship, Saturday evening in the main event of ONE: Pinnacle of Power in Macau.

“Ladies and gentlemen, when I started 14 years ago, this was impossible. But now, after fourteen years, impossible is not a word — it is just a reason,” the Filipino said to the crowd following his epic win. “Anybody can be a world champion, as long as you have the drive and the attitude. I am proud to be the undisputed ONE Flyweight World Champion this time.”

This is Team Lakay’s third world championship in ONE. Honorio Banario is a former Featherweight Champion, while Eduard Folayang is an ex-Lightweight Champion.

The win also avenged Eustaquio’s loss to Moraes back in 2014. The win also lifted Gravity’s slate to 11-6. On the other hand, this is just Moraes’ third loss in 20 fights.

The first round began with both athletes strategically sizing each other up. Eustaquio then opened fire with a left kick, while Moraes countered with a thudding left straight.

As the Filipino pressed forward, he surprisingly shot in for a takedown, and brought “Mikinho” to the mat with an outside leg trip.

Prior to the contest, “Gravity” expressed his desire to grapple with the Brazilian jiu-jitsu black belt, and he made good on his intent by driving Moraes to the canvas.

On the mat, however, Moraes displayed his jiu-jitsu expertise, and quickly began threatening with various submissions – most significantly a guillotine choke.

Shades of their first encounter flashed in fans’ minds, but “Gravity” showcased his improved ground game by escaping before dropping heavy ground and pound.

Things heated up in the second frame when Eustaquio countered a kick with a beautiful left hook, which had the Brazilian reeling. However, “Mikinho” continued to push forward in an effort to close the gap, as his adversary fired from range.

Despite holding a reach advantage, Moraes found little success in shortening the distance between the two in the early going. But with the Brazilian’s relentless pursuit of the takedown, it was only a matter of time before the action shifted from striking to technical grappling.

Eustaquio, who sensed his rival turning up the pressure, opened up the third round by increasing the volume of his strikes.

Moraes’ persistence eventually paid off, however. Soon, he was able to pick up his Filipino foe and slam him to the mat. Though “Mikinho” moved into half guard, Eustaquio made it difficult for his opponent to advance further.

As the championship rounds approached, the victory was within reach for both martial artists.

The Brazilian made the first major move, as he brought “Gravity” to the mat with single leg takedown to start the fourth. But Eustaquio made it back to his feet, and connected with more solid strikes.

Moraes, who appeared to be tiring, had a considerable decrease in activity. Despite that, he wisely fell back on his grappling, where he still enjoyed an advantage.

In the fifth and final round, with everything up for grabs, Eustaquio and Moraes left it all in the ONE ring.

Although “Mikinho” showcased his thrilling BJJ skills once again, even going for a kneebar with a minute remaining in the contest, the Filipino rolled out his submission attempt. Then it was Eustaquio’s turn, as he scored a takedown, threw a knee at the scrambling Brazilian, and took his back.

The pair exchanged positions on the ground, with Moraes throwing punches from the top, and “Gravity” retaliating from the bottom as time expired.

When the scores were tallied, Eustaquio earned the split decision victory, and was rewarded with the undisputed ONE Flyweight World Championship.

Earlier in the night, Edward Kelly was overwhelmed by Jadambaa Narantungalag via TKO due to strikes with just two seconds left in the second round.

Although the first stanza opened up tentatively, the two powerful athletes soon exploded into action.

The strength and judo skill of Jadambaa quickly came to the fore. He threw Kelly to the mat several times, and unleashed a heavy melee of ground and pound.

Kelly sought to work back to his feet and land shots from his kicking arsenal, but the frame ended with the Mongolian taking him down once again.

Jadambaa stuck to his clinch and groundwork strategy in round two, as he stepped in with hard punches and followed up with body-lock takedowns.

“The Ferocious” showed his heart and battled out at every opportunity, but desire alone could not save him. The powerful Mongolian mounted him at the end of the stanza, and opened up with punches and hammer fists.