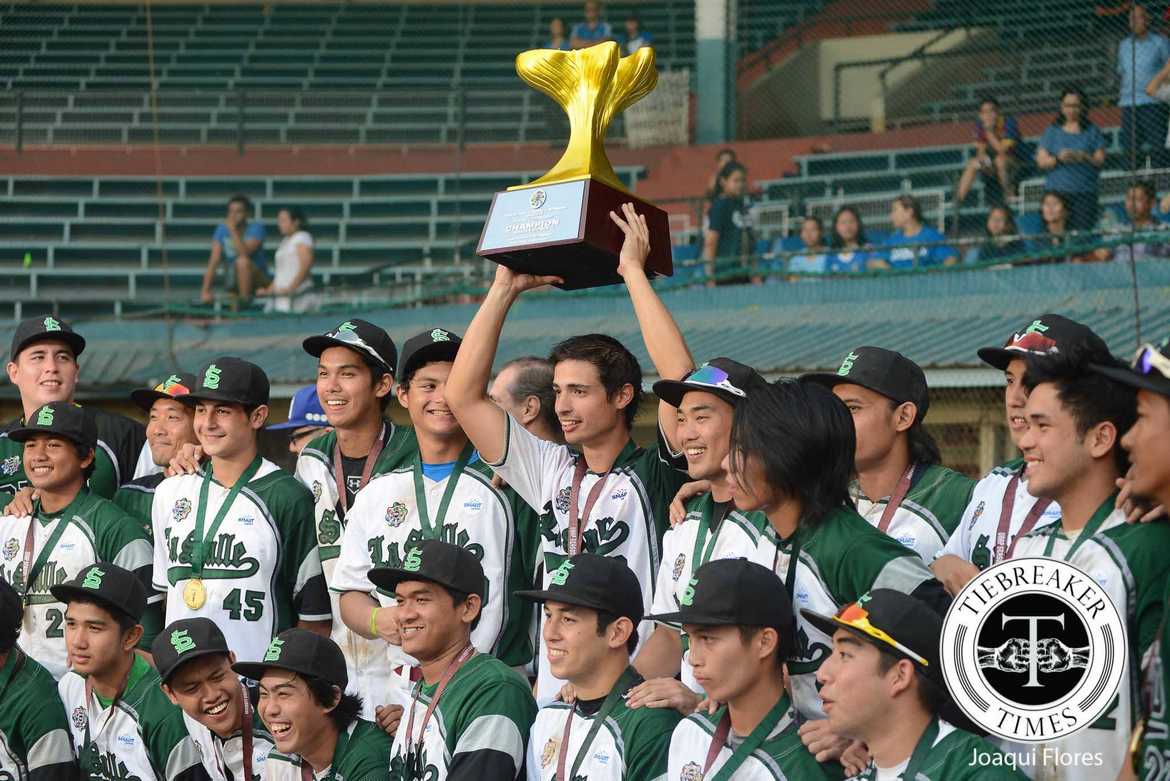 The sight of King Archer Carlos Muñoz going to the mound strikes fear into the hearts of his opponents.

His fast ball pitches produce a thudding sound that resonates all throughout the stadium once it hits the catcher’s mitt. His quiet confidence alone can boost his teammates morale even when down by a huge margin.

With all the accolades he has received all throughout his young baseball career, including being the first pitcher in the defunct-Baseball Philippines to pitch a no-hitter and a Southeast Asian Game gold medal, one thing has eluded the Captain: a UAAP Championship.

Before coming into the fold, the De La Salle University Green Batters had been dead last in the six-team tournament back in Season 73. “I expected it from the beginning. Before I came in, we were last but we expected to compete every year,” Munoz shared.

After a fairly successful rookie year that saw the Green Batters finish third in the UAAP tournament, his sophomore year ended with his team finishing in fifth place with a 3-7 slate. “First year we were third place, not bad. Second year we were fifth,” he reflected. “It just didn’t click during our second year.”

Over the next two years, Muñoz’ reputation as one of the most lethal closers in the league grew and grew. Every game, one could hear murmurs from the opposing team praising the speed and precision of his pitches. Just him taking over the mound to close-out games brought a different aura to the match. The 22-year-old admitted that he is aware of the reputation he has built but tends to not succumb to the pressure that comes with it. “No pressure at all. I just enjoy it because that’s what I do,” he said.

Muñoz and the Green Batters had been able to make two straight Finals appearances during his junior and senior years  but could not get over the hump of facing rivals Ateneo de Manila University. The Blue Eagles, led by their Big Five, swept the Green Batters for two straight years en route to the Katipunan-based squad winning a rare “three-peat”. Even with a deep team that included greats like Bastie Uichico, Dino Imperial, and Carlos Laurel, the combined experience of the Blue Eagles simply outmatched them.

“We weren’t just ready,” he shared. “Ateneo had the experience in the Finals a year before. We were not just ready during that time.”

The inexperience showed during the Game Two of the UAAP Season 77 Finals. With the game tied at 1-all at the bottom of the sixth inning with runners in prime scoring position and just one out, a flyball by Ryon Tionloc to right field paved the way for the two runners to run home. As the La Salle defense moved down, Muñoz made the cut near home plate. However, the then-fourth year senior made an errant throw to catcher Paul Naguit who was away from the home plate, which led the two runners to punch-in the game-winning runs.

Muñoz admitted that he had tried to forget about that error but had always been reminded about it by his friends. “I thought about it once a year ago but my friend’s always remind me about it,” he said. “But (generally) I really don’t think about it. It’s baseball and a lot of weirder things can happen.”

Entering his final year, the Green Batters were the consensus favorites to win this year’s crown. Moreover, they themselves want to win it, and badly. Muñoz himself skipped national team duties just to focus on his last shot of winning a UAAP crown.

“This year, we’re much deeper overall. We have a deeper pitching staff, we have excellent pitchers this year. Our coaching staff also. We included Noli (Luigi Nolasco). Everyone’s playing their role this year.”

However, disaster struck for the Captain during their third game of the season. In a blowout win against the UP Fighting Maroons, Captain Carl made a dive to second base but he landed shoulder first. Muñoz was out of commission up until the latter part of the second round because of it.

“At first it was really hard since it’s my final year but they were playing really well,” Munoz said about missing almost the entire regular season. “If they were not playing well, I’d be really pissed but they played well and it really helped a lot with my recovery.”

Muñoz’s return to the mound was spectacular, to say the least. In their game against Adamson University that booked their place in the Finals, “The Closer” struck out eight batters in a great display of pitching accuracy in a 4-1 demolition.

In the Game One of the Finals, Muñoz played right field and helped lead his team to an 8-3 win to gain the 1-0 advantage in the series. He was 1 for 3 at-bat, a triple during the 7th inning, and was able to punch in two runs and an RBI for the game.

“Everyone is playing their roles. I don’t care who I am, I have to play my role too,” he said about sophomore Boo Barandiaran and rookie Diego Lozano pitching for the Green Batters during Game One.

Game Two saw both squads slug it out in an instant classic. During the 8th inning though the baseball gods played a cruel joke once more.

With the Green Batters holding an 11-9 lead over the defending champions, Muñoz, playing right field again, was about to make a catch of a popup fly by Ryon Tionloc. As Captain Carl was about to make the catch, he suddenly crumbled to the field, holding his left knee.

“I stretched then I heard something pop,” he said after the game. “I don’t know if it’s a cramp or if I completely tore it out.”

“The Closer” was supposed to close-out the game for the Green Batters but instead he was stretchered out of the game. Boo Barandiaran was able to hold off the Blue Eagles in the final inning to end the school’s 13 year title drought.

Even with the captain down, the next great La Salle pitchers, Diego Lozano, Arvin Herrera, and Barandiaran, steered the ship to the right direction. “Everyone did it for themselves. They did not do this for me, we did it for ourselves,” Muñoz said. Little did he know that his teammates had done it for him.

“They wanted us to win but we wanted to win this for Carl,” Finals MVP Boo Barandiaran said.

After giving five years of his life to La Salle, Carlos Muñoz, now a UAAP Champion, knows that he leaves the Green Batters in good hands with the likes of Diego Lozano, Boo Barandiaran, Kiko Gesmundo, and Arvin Herrera ready to step up and be La Salle’s next great closer.

Demecillo carried out of Arena after UP win