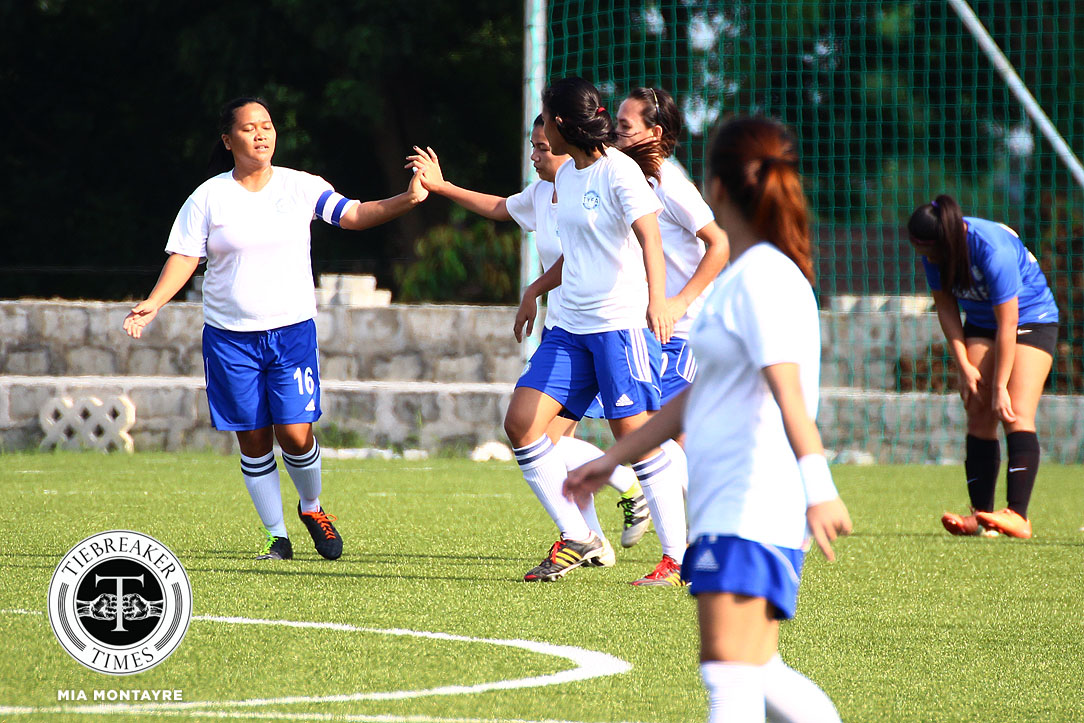 With La Salle virtually guaranteed champions after building an insurmountable lead, the next best thing up for grabs is second place which is now being hotly contested by Far Eastern University Lady Tamaraws and University of Santo Tomas Lady Booters.

After their teams battled last weekend at the PFF National Training Center in Carmona, Cavite, it was the Thomasinas who prevailed 3-0.

FEU were fiery out of the blocks but UST managed to hold off the aggression. A foul inside the area after 26 minutes may very well have turned the tide towards the Lady Tigresses as national team striker Charisa Lemoran duly converted a penalty.
With a minute left until the halftime whistle, Nina Yanto baited goalie Kimberly Pariña from her spot before dancing around her to tap in the second goal.

On restart, the España based squad refused to let their guard down effectively shutting out their neighbors from Morayta.

In the 62nd minute, Lemoran fired a pass from the halfway line that put the ball within Pariña’s reach but Shelah Mae Cadag beat her to it before putting away the final UST goal.

The win puts UST squarely in second of the ladder separated only by a single point from FEU and will look to hold on to that position with two more games yet to be played.

*UST student-athletes were unfortunately not made available for comment.

The University of the Philippines Lady Maroons were one of the last teams to rejoin the league and they would need to stay perfect this second round if they want to get out of the bottom half. With a 2-0 win over Fuego Espanya, they just might be on their way.

Fuego Espanya did not easily roll over against the much superior collegiate squad but after 39 minutes of play, it was UP that claimed the lead.

Eloisa Malmis who usually stayed back in defense was in attack for this match and was fouled in the box which led to a penalty. BG Sta. Clara was tasked to put UP on the board and she delivered.

The Diliman-based squad were clearly struggling with their play as a defiant Fuego Espanya continued to frustrate them, keeping them at bay for at least until the last eight minutes of the match.

Malmis was again involved after gathering a through-pass from Sta. Clara, then launching a shot that keeper Diana Rose Redondo parried. Yanzie Yalong pounced on the rebound and tapped in the insurance goal to seal the win.

As captain, Malmis later admitted that the Lady Maroons are struggling with many of her teammates absent due to injuries but was pleased with the outcome nonetheless.

“I thought we did well and we achieved the objectives given by our coach though it took us a little later to make the adjustments. Everyone is adjusting pa. Pero palagi ko talaga sinasabi na huwag tayo mag-focus sa wala muna ngayon, mag-focus tayo sa anong meron tayo,” she related.

Malmis also revealed that their place in the standings is the least of their concerns at the moment, giving priority to helping their new recruits settle in.

“Gusto lang ng coaches namin [na] maglaro kami for experience at maka-adjust kasama [yung] mga bagong players namin. Basta our main target is to build chemistry with each other in preparation for [the coming] UAAP,” she continued before clarifying that they will not forego the rest of their games.

The Younghusband FA made a splash on their return to the second round, and it was at the expense of one of the stronger club teams.

In OutKast FC’s defense, the team was struggling with player attendance—a strange twist of irony when considering that this was an issue that plagued TYFA several times in the first round.

TYFA did not take long to put themselves in the lead either, needing only six minutes after a nonchalant kick by April Reyes from thirty yards out ended flying into the net.

In the 22nd minute, the ladies in white and blue doubled their lead after Joma Clemente broke away for a strike that Hazel Arce could not put a handle on.

This finally woke up the current fifth best team and after subduing TYFA for the rest of the half, they began to click and make several attacks into the final third to start the second half, despite being repeatedly frustrated by many offside calls.

OutKast’s efforts were rewarded with a 67th goal from Mara Sabanal who scored from a distance, but that was it as another goal in the last 7 minutes was the dagger that TYFA needed to halt their comeback.

Yehee Eom was dashing towards the goal after taking the pass by Clemente, who then had crumpled to the ground in pain after a collision, when Eom herself clashed into Arce. Not hearing any whistle to stop play, a trailing Krizha Guteza picked up the loose ball and the substitute slotted it into the net to complete the upset.

Reyes who is the captain for the Younghusband outfit could not keep her surprise on beating the team that routed them 7-0 in their previous meeting.

Reyes said she hopes the win will spur TYFA into improving on their place in ninth of the standings but thinks the change in the league format will make this difficult.

No matches have been scheduled this coming weekend.