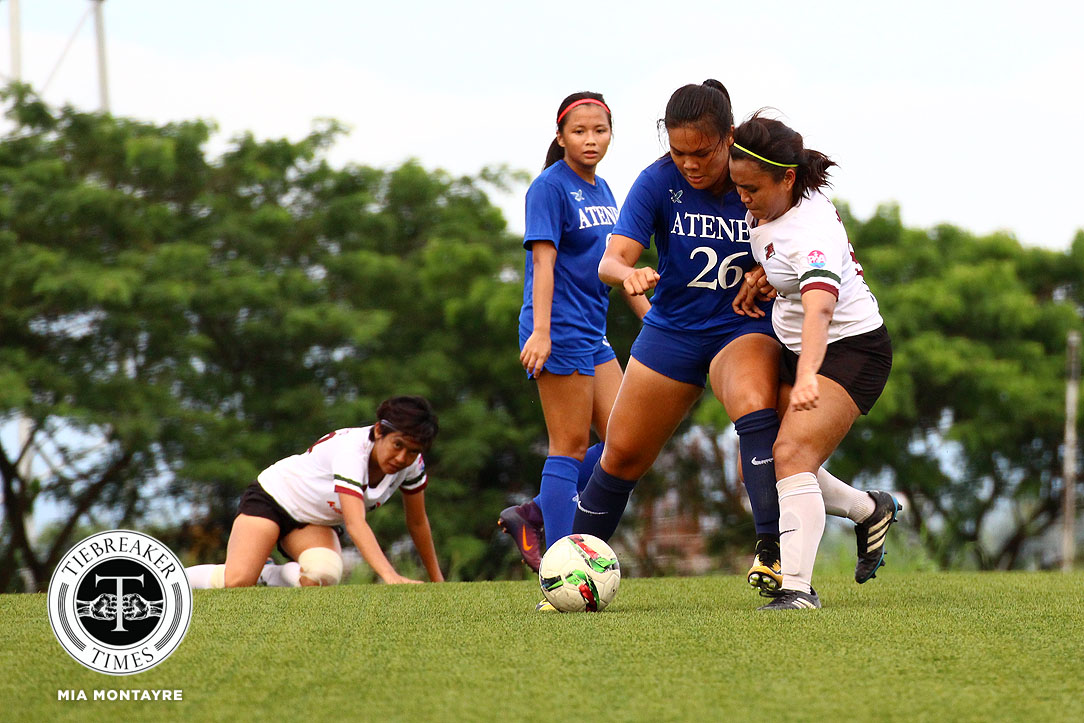 Green Archers United FC made up for their second round opening loss with a 2-0 victory over slumping club team OutKast FC who have suffered their third straight defeat.

Alisha Del Campo shone the brightest in the encounter, scoring the match’s only goals.

She needed only two minutes to get started, when she picked off a lazy pass by the OutKast backline to drive home the first goal.

Midway through the second half, Annalie Martinez gathered a blocked attempt by TJ Isulat before passing off to an unmarked Del Campo who scored the second goal.

Del Campo’s brace puts her in second of the scoring leaderboard now with a league total of 13 goals just one behind current top striker Kyra Dimaandal of De La Salle University, and the national team striker was not shy of the implications.

“I am extremely glad about this! I will strive harder not just to top the rank for the scorers but also to rank up my team’s position,” she enthused.

GAU currently sit in fourth of the standings with two more games to go and Del Campo hopes the team’s good fortune will continue in taking the Alabang-based club higher despite woes in training.

“Wasn’t really expecting the game would result into that since we didn’t have any preparation and some of our teammates were missing, but we were all happy everyone played great. Just like the first round, we want to win all games we play in and just do what we can do for the team. Hopefully we can stay close to the top two or three.”

The University of Santo Tomas have been perfect this second round punctuated by their latest 4-1 win over club team Fuego Espanya.

The Lady Booters of UST were more than ready to rumble with MJ Indac scoring inside the first three minutes. Rookie Nathalie Absalon followed up with her contribution eleven minutes later to double UST’s advantage.

Shelah Mae Cadag added a pair of her own in the 19th and 34th minutes to secure a staggering 4 to nothing lead in just the first half alone.
Despite UST’s boon, Fuego Espanya had a lot to be cheerful for in this match. The club has been winless and although the goal margin of their losses have steadily been improving, they have remained goalless until the 59th minute of the Saturday encounter when Jean Chua broke that streak.

The former UA&P player who also happens to be a UST alum ironically chose this match to make a special mark, striking a curling beauty off a free kick from forty yards out, past the outstretched mitts of the Thomasian keeper.

“It was definitely a proud moment. Our team entered the tournament knowing we’d be going against the best and the strongest. Chances to score would not come by often. I’m glad we got to capitalize on the goal-scoring opportunity,” Chua shared before admitting she was never sure the ball would go in.

“In any attempt, one always hopes that the ball spins the right way and flies the right height so it goes in. Parang sa set plays, you know something could always go wrong but you do what you can and you hope,” she added.

For what it’s worth, UST take this match to put the stranglehold on second of the standings with one game to go and ahead of their nearest competition Far Eastern University by four points.

*UST’s student-athletes were unfortunately not made available for comment.

Hiraya FC have kept their second round momentum going after fending off a defiant challenge presented by the young upstarts of the Younghusband FA after a 4-2 win.

Both Hiraya and TYFA have bolstered their squads with valuable recruits in the transfer window before the start of the second round: proven veterans for Hiraya while TYFA opted for promising young guns.

These veteran recruits proved key for Hiraya during their Sunday matchup against TYFA. In the 18th minute, Hiraya were on the board after an own goal instigated by a Cam Rodriguez.

Then in the 29th minute, Erika Casas danced around defenders inside the box before passing to a nearby Aiza Mondero who finished with ease. Eight minutes later, Mondero struck again when she snuck behind a TYFA defender for a steal before slamming home a brace.

In the second half, the rookies of TYFA began to make their move. Six minutes after restart, Kara Isobel played a fancy backheel pass to a rampaging Katilyn Dabalos which took the Hiraya defense by surprise. Goalie Gely Tiu managed to parry the initial attack but could not stop the follow-up.

Five minutes later TYFA pulled another goal back after being awarded a penalty which Dabalos converted with ease.

Then three minutes after that, Rodriguez delivered the dagger that halted TYFA’s comeback. Cristina Delos Reyes was running down the left flank when she slid a pass to Rodriguez who curled a shot into the back of the net, a shot that may have also taken the fire out of TYFA.

The win puts Hiraya back in the top half of the table in fifth, a position they haven’t been in since early in the season. The brace scoring Mondero admits that the club is relishing the feat and that they are hoping to do one better.

Ateneo and UP split points to stay in place

The Ateneo de Manila University and University of the Philippines were looking for a win in order to improve their place in the standings.

Both teams went hard that they wound up cancelling each other, ending in a goalless draw. It would be the third time both teams have drawn each other after other occasions outside of the league.

Both teams are also going through a rebuilding stage thus much of either team’s system relied heavily on how the new players to their squad adjusted, and it was clear in the Sunday afternoon that both were still works in progress.

It was Ateneo that jumped the gun at first, testing the UP defense with their long balls from back to front. Unfortunately the Lady Eagle onslaught fizzled out in the final third as they struggled with their finishes.

UP meanwhile were carefully building up wayward attacks of their own led by the flanking attacks of BG Sta.Clara and Eloisa Malmis only to be thwarted by the determined heroics of Ateneo custodian Mariane Caparros.

In the end, a banged up Ateneo and a bruised UP were forced to share a point each with the former remaining in 6th of the standings and the latter at 8th with two more matches for either to go.

Even though the teams should be more familiar with each other because of how frequently they played against each other recently, UP coach Stephen Permanes laments that they could not take advantage.

“Now we established our strength already and we worked on the weaknesses. It should be our game pero medyo nahirapan lang kami after twenty minutes of the game. Every time we regained the ball, nagmamadali masyado yung players,” Permanes said.

Both coaches shared grievances which they hope will be addressed soon especially before the coming UAAP football season. For Merida, it’s more games for his wards. For Permanes, it’s a field to practice in.

The PFF Women’s League continues this weekend at the PFF National Training Center in Carmona.