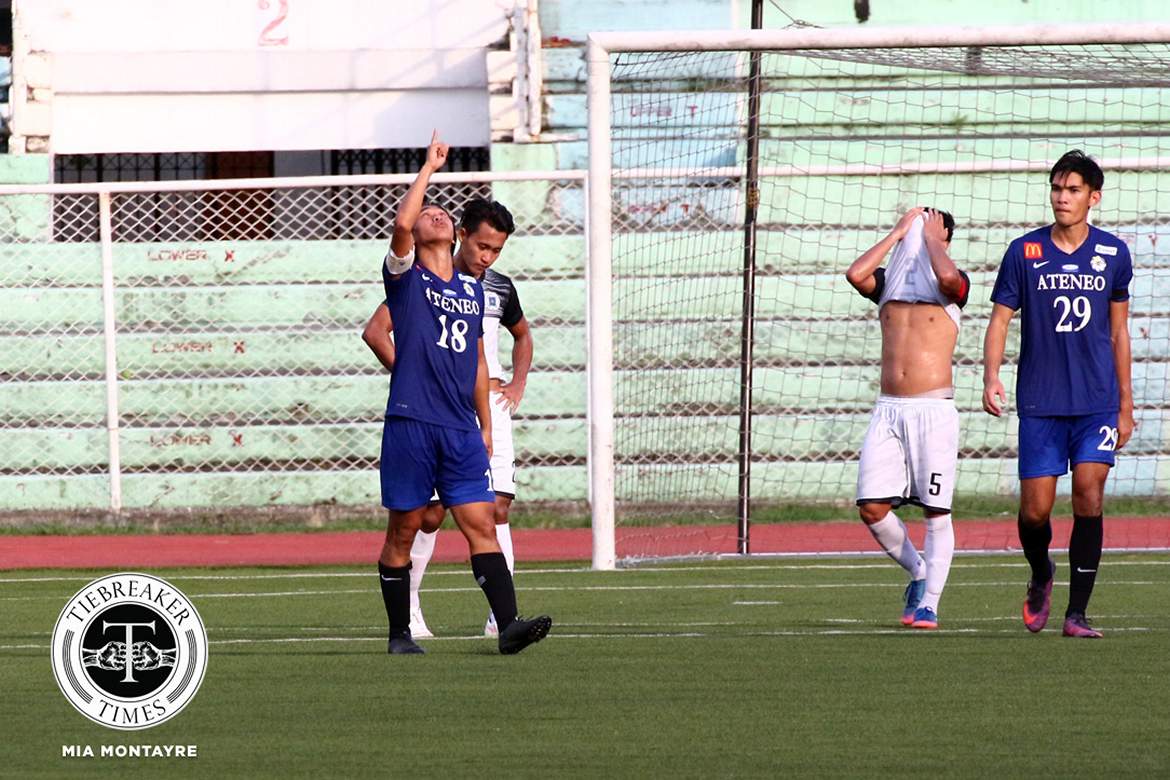 With the University of Santo Tomas giving him the space to work, the striker took advantage of clinical passes from the back, picking up a brace in the process, to lift the league-leading Ateneo de Manila University Blue Eagles to a 2-1 victory over the UST Golden Booters, Thursday at the Rizal Memorial Stadium. More importantly, he punched Ateneo’s ticket to their second straight Finals appearance.

“I found the game pretty well, when it comes to the mentality of taking on UST. We thought of Carlo [Liay], it is his last year,” the 6-foot-1 striker said. “That inspired us to give him another opportunity in the Finals and get that gold.”

The season’s top side, however, started at the back foot and the hosts capitalized with several incursions into the former’s defensive third.

Nonetheless, when the Blue Eagles’ passing was ‘on point’, there was no turning back.

Numerous chances went Ateneo’s way; only fouls inside the box of their own doing nullified any decent attempt. The biggest chance came in the 16th minute, but UST keeper Zaldy Abraham parried the Gayoso cannon.

The crafty scorer would not be denied six minutes later, as Enzo Ceniza laid the ball for the Gayoso, who beat his defenders to send the ball past Abraham.

Ateneo had more chances as they repeatedly pierced through the Thomasians’ defense. However, it was not until the 44th minute that the Loyola-based squad doubled the lead.

Gayoso once more received a nifty pass from the midfield, made his way through the defense, before taking a soft shot that resulted to another goal. Gayoso’s brace became the go-ahead goal of the game.

At the resumption of the match, the Season 69 champions came out with more urgency. Frequent attempts led to more chances on goal, and it was just a matter of time for a game-changing goal.

Marvin Bricenio, who showed some promise after coming in late in the first period, wasted no chance and tapped in a Dionisio Busmion delivery past Arcilla. Having secured their advantage, Ateneo went from playing on the front foot to a more defensive approach.

The Thomasians could not get past the stingy Atenean back line, with Busmion’s chance in the 88th minute proving to be the biggest chance for a late equalizer.

With the win, the Blue Eagles are through to their second straight Final, which is scheduled for Sunday, May 7 ,at 3:00pm at the same venue.