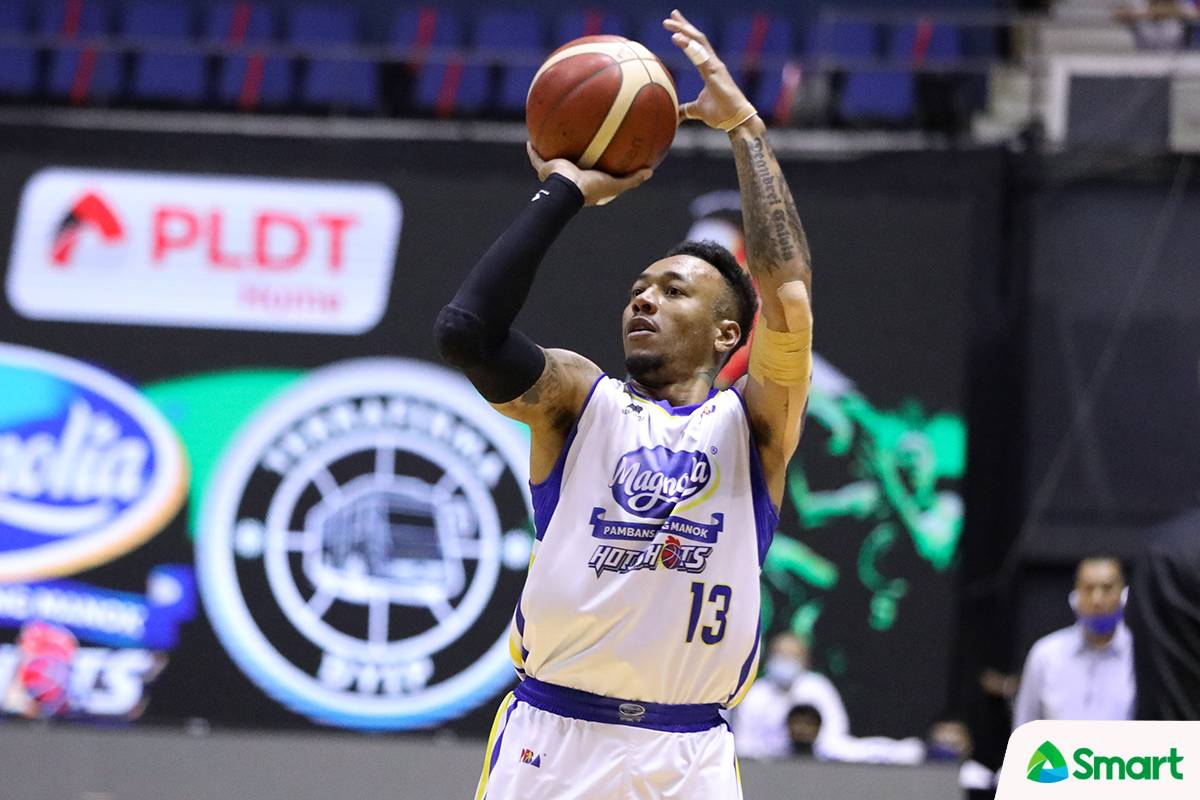 Magnolia announced its 2021-22 PBA Governors’ Cup debut with a bang as it sent Terrafirma crashing back down to earth, 114-87, in the league’s first game at the SMART Araneta Coliseum after nearly two years, Wednesday.

Mike Harris and Calvin Abueva were on the forefront as the Hotshots overcame a slow first quarter en route to foiling the Dyip’s back-to-back bid.

The former Best Import, the oldest reinforcement this conference at 38, tallied 30 points and 15 rebounds. He made most of his output in the second half to sustain the efforts of the ‘Beast’ in the second period.

Abueva poured 10 of his 17 points there, including the freebies that pushed their lead to 13, 43-30, with 1:05 to go. He went on to end the half with a halfcourt make as time expired to maintain their double-digit advantage.

The 2021 Philippine Cup BPC shot 6-of-9 from the floor and hauled down 11 rebounds to finish with his own double-double.

“Actually, ‘yan ‘yung pinag-usapan namin before this game. We wanted to start strong, just like what happened in the bubble. We want to send a message right away,” said head coach Chito Victolero.

“Ang worry ko lang is ‘yung timing. Kita nung first half lahat halos excited eh, but once we all settled down, gumanda at umayos.”

Paul Lee also made his presence felt in the victory with 16 points on a 50-percent clip. Ian Sangalang and Aris Dionisio had 10 each.

“Even si Mike, ‘yan ‘yung gusto niya. We want more ball movement, locals more involved,” Victolero said as they dished 21 assists. “On defense okay naman kami, on offense we want to share the basketball which I think we did well.”

Meanwhile, Antonio Hester led Terrafirma with 21 points and eight rebounds, although he didn’t play the last 9:17 following a collision with Jackson Corpuz.

Juami Tiongson had 20 points. Alex Cabagnot made 16 markers, nine assists, and seven boards, while Matt Ganuelas-Rosser chipped in 10 as the Dyip failed to emulate their comeback win versus Rain or Shine last Saturday.

It was the PBA’s first game back at the Big Dome after 21 months. And Victolero didn’t hide that he, too, was excited heading into the return as a live audience was in the stands as well after two conferences in empty venues.

“It adds to the motivation, to the fire, our energy, and aggressiveness. Masarap pakinggan nang may sumisigaw, talagang naglalaro kami ng basketball.”