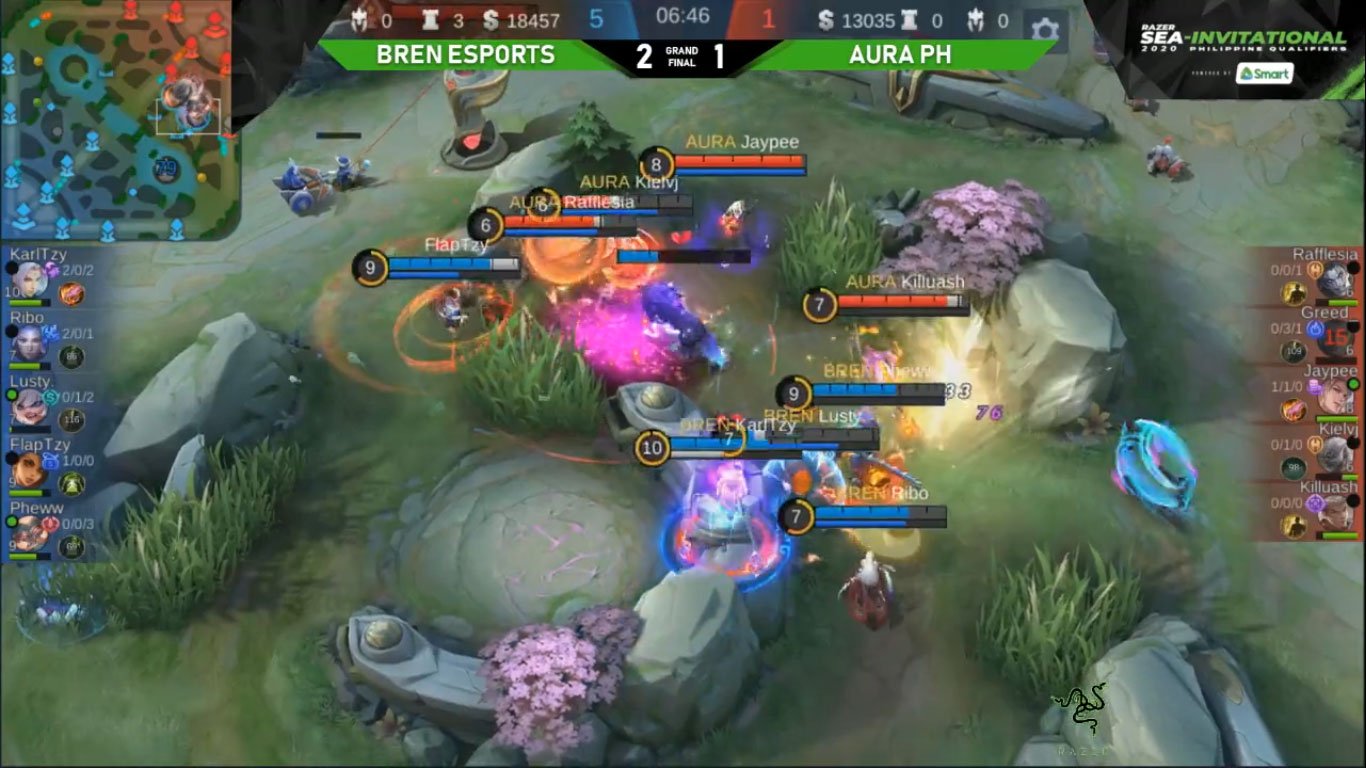 BREN Esports will be representing the Philippines in the 2020 Razer Mobile Legends: Bang Bang Southeast Asian-Invitational after taking a 3-1 victory over Aura PH in the best-of-five Grand Finals of the Philippine qualifiers, Thursday evening.

BREN Esports, who only needed two wins to end the series due to their upper bracket finish, dominated in Game One through the outstanding performances of Karl ‘KarlTzy’ Nepomuceno and new addition Charles ‘FlapTzy’ Canon. Together, they put Aura PH — composed of the core of two-time MPL-PH champion Sunsparks — on the brink of elimination.

Though Aura PH managed to bounce back in Game Two, FlapTzy — who last played professionally with Cignal Ultra and is currently on a ‘trial basis’ with BREN — made sure to give his new team a massive boost in his debut.

Entering the seven-minute mark of the third match, BREN surrounded Aura PH’s second-tier tower in the bottom lane, which resulted in a clash.

KarlTzy (Ling), was able to pick off Greed_ (Valir) to start the bloodbath. Jaypee (Lancelot) then answered with a kill of his own, erasing Lusty (Popol and Kupa) and Ribo (Luo Yi) off the map. KarlTzy then shut down Jaypee, while FlapTzy (Esmeralda) followed it up with a kill on Killuash (Chou) to tip the scales for BREN with a four-to-two exchange.

With the gold lead snowballing to BREN’s side, Aura PH was not able to hold off the duo of KarlTzy and FlapTzy, ending their six-tournament winning streak.

FlapTzy, who led the Philippines server in points just last season, spearheaded BREN’s attack with eight kills and two assists. Meanwhile, KarlTzy, who was named MVP of the match, tallied six kills and eight assists. Both players ended the game with no deaths.

Ribo, Lusty, and Phew (Thamuz) backstopped their core heroes with a combined tally of three kills and 26 assists. Mico ‘Coco’ Sampang, BREN Esports’ longest-tenured player, sat out the game in lieu of FlapTzy.

Meanwhile, Aura PH’s four kills all came from Jaypee, who ended the match with four kills and four deaths. On the other hand, Greed_ had a forgettable outing with three assists and six deaths.