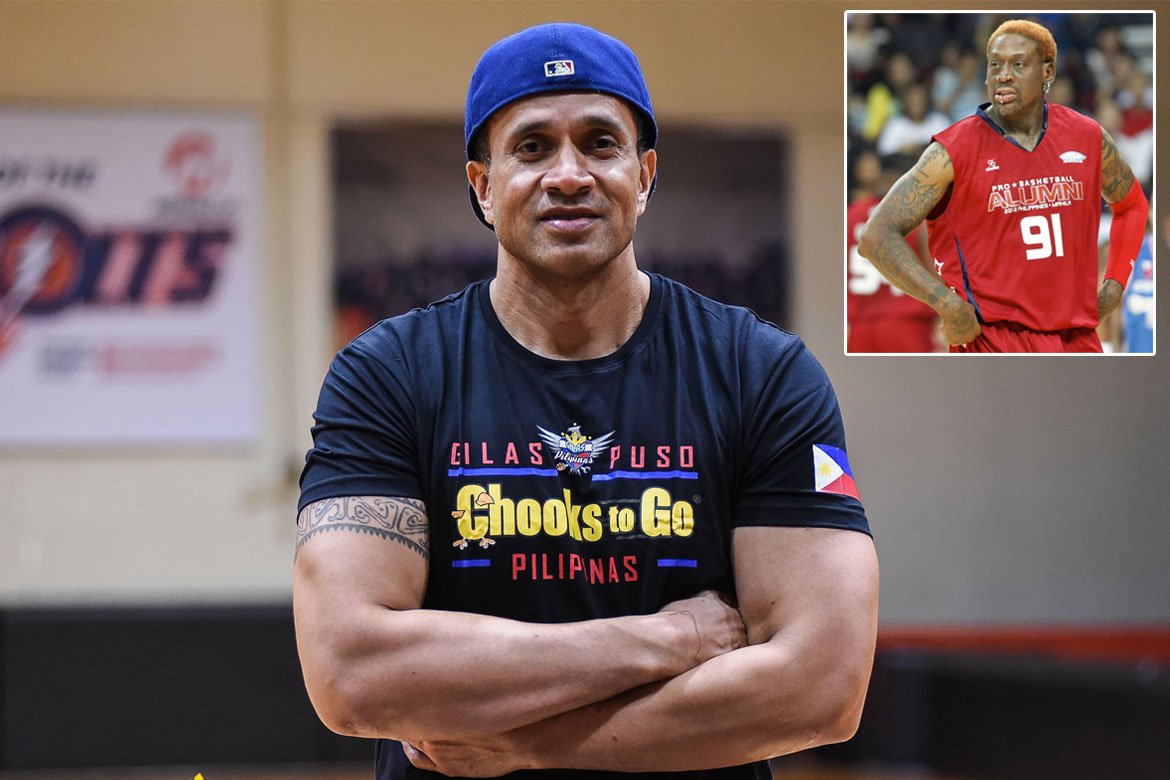 For a moment, Asi Taulava was more of a fan than a basketball player as he set foot on the court.

In 2006, the former PBA MVP and the Philippine men’s cage team took on the travelling “Bad Boys” crew led by NBA great Dennis Rodman in an exhibition game at Araneta Coliseum.

Rodman had playing-coach Sidney Moncrief and other ex-NBA All-Stars like Darryl Dawkins, Alex English, and Otis Birdsong in his squad that also featured players from the collegiate ranks.

The national team, who had Chot Reyes manning the sidelines, was then preparing for the William Jones Cup.

The home team won over the star-studded squad, 110-102. But the fact that he shared the court with Rodman made more memorable for Taulava, since he really looks up to “The Worm”.

“For that opportunity for me to share that floor with him that night, I was more of a fan than anything else,” he recalled in the Hoop Coaches International Webinar.

For Taulava, his admiration towards arguably the greatest rebounding forward the game has seen grew, even more, when he saw first-hand how Rodman showed love for the game.

“This guy, he’s unbelievable. You see him in the NBA. You think he’s a complete jerk or complete a-hole. But that night, when he came in with his travelling team, he was awesome,” he said.

“He was just out there enjoying the game. You can see the love that he has for it too.”

The fan in Taulava has reawakened, as Rodman was featured in ESPN’s The Last Dance documentary.

An earlier episode of the 10-part series about Michael Jordan and the 1997-98 Chicago Bulls highlighted Rodman. Taulava then turned sentimental about how he had followed the legend’s career.

“That guy gave so much to the game. You know, I followed his whole career from Detroit — you know I’m a big Laker fan — but I idolized Rodman because of his rebounding,” he continued.

“I watched him because of his work ethic and everything, but I followed him when he was with Detroit. Then he came up to the Lakers and San Antonio, and like, all the teams he played for.”

For Taulava, now 47, that one night in 2006 remains one of his career’s most memorable moments.

“I was excited that I was chosen as one of the players from the PBA to play against Dennis,” he said.

“It was just an honor to just be on the floor with him, just to see this man up close.”

He only wishes, though, that he and Rodman had a picture together.

“I just wish somebody took a picture of us together,” he said.

“If anybody has that picture out there with me and Dennis when he came here on his tour, please send it to me ASAP. I’m begging you.”