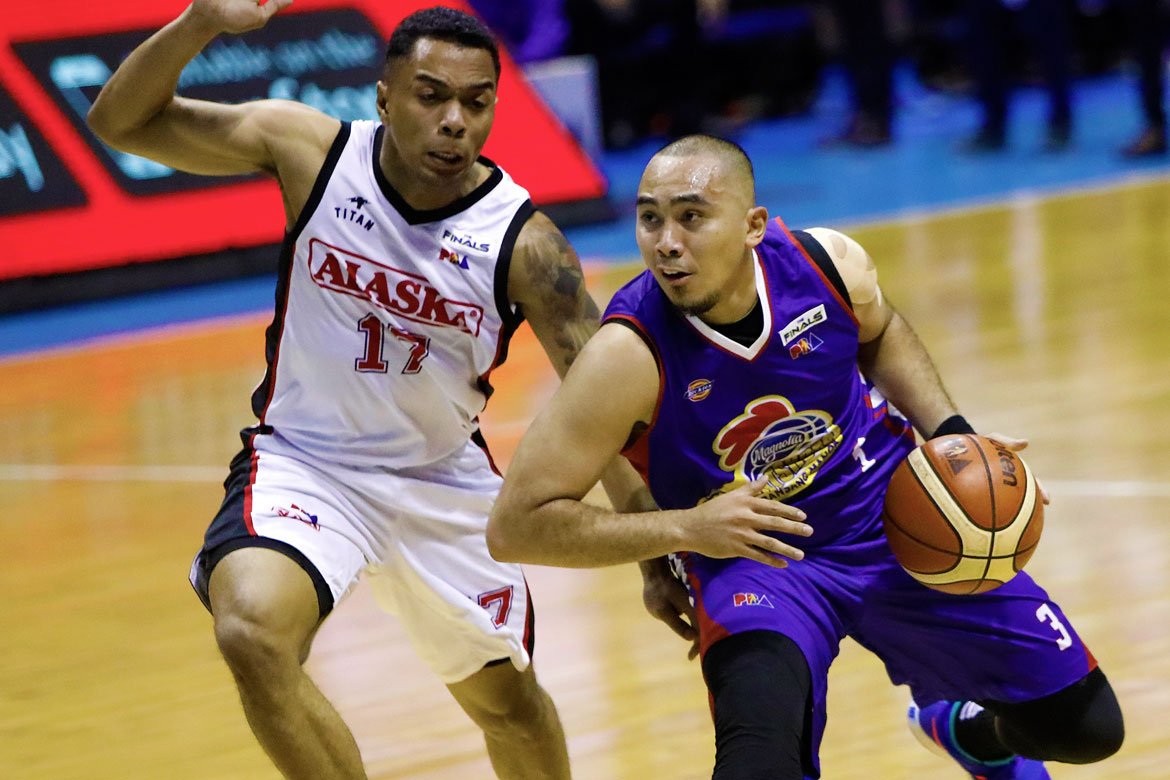 Paul Lee was the hero Magnolia needed, as the Hotshots are now a win away from bagging the 2018 PBA Governors’ Cup title following their 79-78 victory over the Alaska Aces, Friday night at SMART Araneta Coliseum.

Paul Lee was the hero Magnolia needed as the Hotshots have moved a win away from bagging home the 2018 PBA Governors’ Cup title following their 79-78 victory over the Alaska Aces, Friday night at SMART Araneta Coliseum.

Lee sank a leaning jumper off a retrieval of a blocked Romeo Travis shot with 1.3 seconds left to give his side the one-point lead and to help the Hotshots avoid a meltdown, as they blew a 17-point lead late in the second quarter.

The Best Player of the Conference finished with 11 points and 10 rebounds – this, after averaging just 9.5 markers and 4.8 boards in the first four games.

“The play is for Paul, and it was a chance for Romeo to go to the basket. Although na-block yung shot niya, nakuha ni Paul. It was just God’s will,” said coach Chito Victolero. “It was a great game, one of the classics in terms of the PBA Finals.”

Ian Sangalang was in his element as well, as he led Magnolia’s offense with 20 points – 13 in the first half alone – along with six rebounds. Mark Barroca supplied 14 points, while Jio Jalalon chipped in 13 markers and five boards.

Travis only made 10 points, but he led the Hotshots in rebounds as he had 17.

The Hotshots were able to come back from that quickly by ending the third chapter with eight straight points to regain the lead, 65-62.

Magnolia then took the driver’s seat and even led by eight, 74-66, after a Sangalang jumper with 4:55 remaining in the final period. But Alaska fought back once more, as Kevin Racal’s one-hander put them up, 76-74, with 1:15 to go.

Racal had a chance to add to their lead, but he and Jake Pascual both missed from point-blank range. That led to Sangalang converting a three-point play, and the Hotshots were up again 77-76 with 18.7 seconds left.

Import Mike Harris was able to deliver for the Milkmen seven seconds later, as he went perfect from the charity stripe to give his team a one-point lead. But that was the Aces’ last hurrah for the match.

Lee was clutch yet again as he sank a leaner with 1.3 seconds left to play. The Aces had one last opportunity to steal Magnolia’s thunder, but Harris’ potential game-winner – a fadeaway jumper over counterpart Travis – fell short.

“I want to commend my players for their mental toughness. We were up by thirteen pero nakabalik sila. I had to motivate my players to keep on fighting. We are tired but it was all about heart,” proudly said Victolero.

“Credit to my players for staying together,” he added.

Harris led the losing side with 28 points and 20 rebounds. Racal and Simon Enciso each supplied 13 markers on an identical 5-of-10 shooting from the floor. Chris Banchero only had three points, but had eight assists and six boards.

Magnolia will look to win their first title in four years – or since winning the Grand Slam-sealing title in the 2014 edition of the season-ending conference – in Game Six on December 19, Wednesday, at the Ynares Center in Antipolo City.

Paul Lee’s game-winner was ‘God’s will’