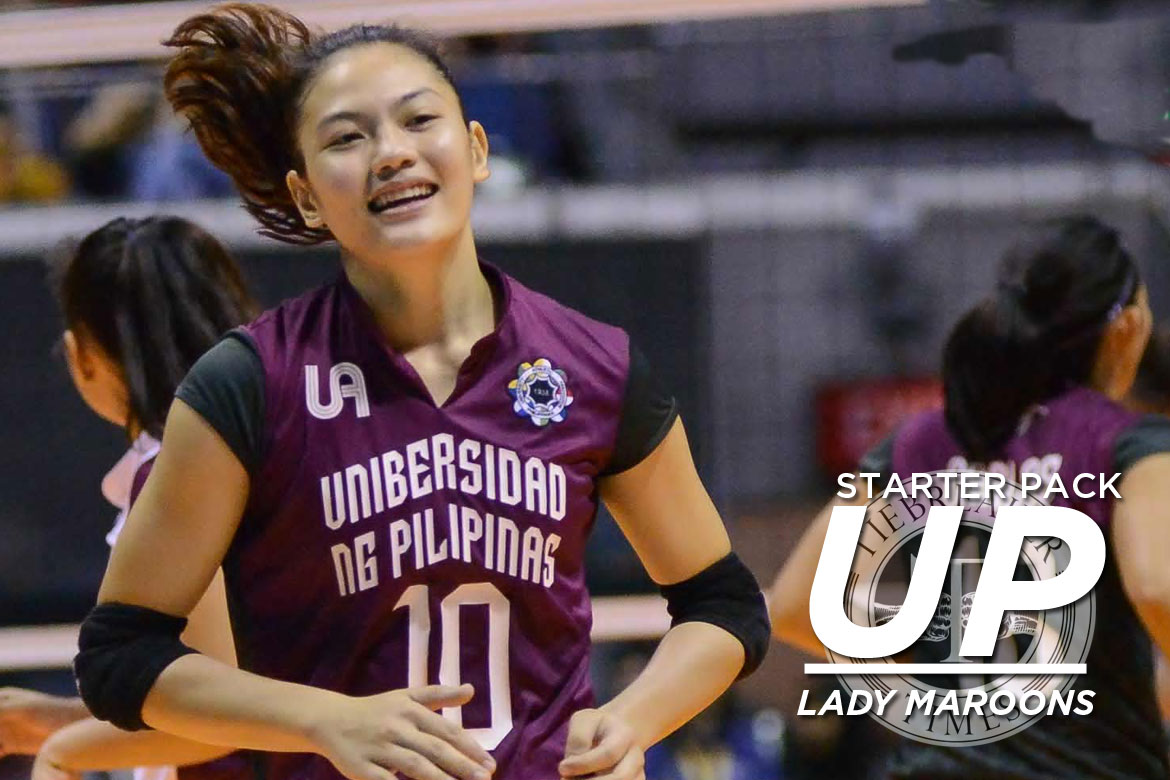 The University of the Philippines Lady Maroons were supposed to be one of the best teams of Season 79. For a moment, they lived up to the part, winning their first four matches, which included a historic win over their perennial tormentors, the De La Salle University.

However, the pressure slowly caught up to UP. From their sudden dip in performance on the court to their cold shoulder treatment of the media, it was clear that there was internal conflict in the program.

After dropping out of Final Four contention, the Lady Maroons cleaned house in the off-season. There’s a feeling of freshness within the program nowadays, as they’ve reconfigured their culture. They have a new head coach in Kenyan Godfrey Okumu and even a new team manager.

The team is also set to take on a new set of leaders, as the three veteran faces of the team of the last five years — Kathy Bersola, Nicole Tiamzon, Pia Gaiser — have all exhausted their playing eligibility.

A lot feels new with this UP team, and it will be interesting to see if this group can respond better to heavier pressure and expectations that come with being perennial contenders. 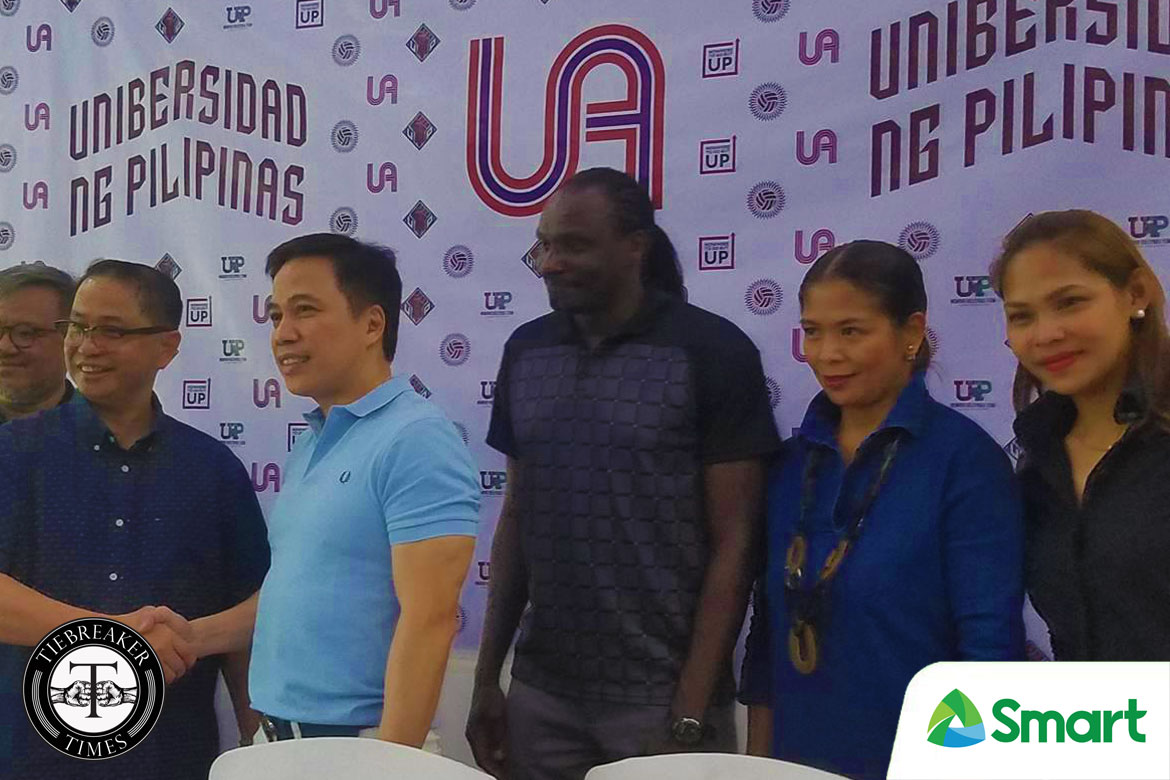 Godfrey Okumu projects an imposing figure on the practice court. The tall, barrel-chested coach bellows out instructions that pierce through the everyday hustle and bustle in the packed College of Human Kinetics Gym. He’s one to stall an entire practice until one player performs a drill exactly to his liking.

Off the court, Okumu sheds his intmidating facade and wears his immense charisma. On one particular day, Okuku gladly greeted media members who observed one of UP’s practices. He wittily answered questions left and right, keeping a straight smile on his face during the entire scrum.

The man Okumu replaced, Jerry Yee, was a different sort. The Hope Christian High School coach, who coached the Lady Maroons for three seasons, was more comfortable with simply being a stern figure to his players, and was always reluctant when handling the fluff of being a head coach, like interviews and other media obligations.

Last year’s team captain, Ayel Estrañero, notes that Okumu is a much more vocal coach compared to Yee, who was known for his silent timeouts.

“It’s actually teaching us how to play volleyball. It’s not just knowing the skills but understanding why we’re doing certain movements inside the court,” Estrañero said.

Both, however, are similarly strict with their training. Okumu noted that he didn’t try to change UP’s culture too much. He is more focused on improving his current crop of players, who have developed their chemistry even before he arrived.

“UP was and I believe is going to still be a strong team,” Okumu insisted. “What I think is, they should have won. Because three years, the same team, it’s quite a long time. But I think the players, they know each other, and as I said before, I’m not trying to change the way they play. What I’m trying to do is to improve whatever they have, so that they can make it faster.

“If they can spike, then spike stronger. If they can pass, then they can pass better. So everything, I’m trying to improve — speed, power, and accuracy. Otherwise, this is the same team. So I hope by changing the speed, the way they pass, the way they spike, and improving their power, I think we will get somewhere.”

Okumu’s selection as the new UP head coach did not come from left field. He had first met the team late in 2016, when he held camps in the Philippines. He then helped arrange the Lady Maroons’ training camp in Japan prior to Season 79, and had kept in touch with the team since then. Okumu left Japan, his home for more than a decade, and brought his family over because he believed in the Lady Maroons.

“This is volleyball. No pressure, business as usual. I think my girls are good, they’ll do a good job. I trust them. So no pressure.” 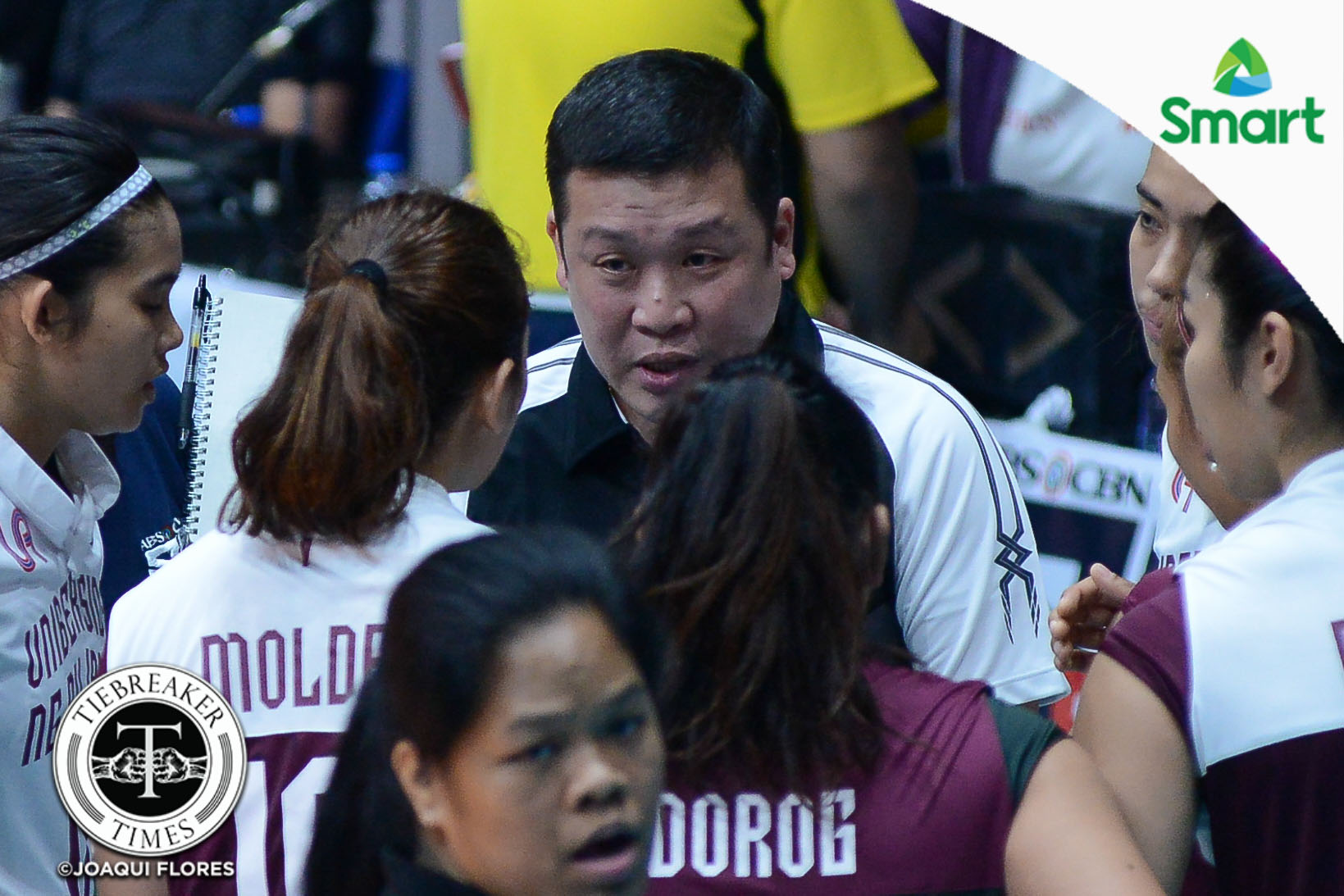 It seems that it was just yesterday that the Lady Maroons were the pick for the next UAAP dynasty. Yee had brought in the celebrated recruiting class of Season 78, which includes that season’s Rookie of the Year Isa Molde, Diana Carlos, and Justine Dorog. The trio were pegged to lead UP into a renaissance that the program had not seen since the pre-Final Four days of the UAAP.

Three years in, and the process has not gone as smoothly as first foreseen. Season 79 started out as a landmark season for the Katipunan-based squad, going 4-0 with a win against the lauded DLSU Lady Spikers. Their mix of veterans and sophomore talent was churning, until a sudden collapse midway through the season. They ended up losing four straight games and slipping out of the Final Four picture after making the semifinals in Season 78.

It was clear from the way players spoke about last season that there was some sort of internal conflict that weighed on them. Rather than letting the past keep bogging them down, the Lady Maroons are eagerly moved forward to Season 80, looking for redemption.

“Siyempre, we have to move on from that season. Yes, it was heartbreaking, thinking that we really wanted to at least enter the Final Four, and we didn’t really achieve our goals,” said Estrañero, the team’s starting setter.

“Sayang kasi we really had a good line-up that season. And ngayon, we have new players coming in this season na first time nila. So, siguro, I can’t expect so much from the team, but I can say that we’re just really gonna do our best and play our game every game.”

From one of the league’s up-and-coming teams, UP are now one of the most experienced squads, considering just their main rotation players.

The aforementioned Molde, Carlos, Dorog, and Estrañero, along with Marian Buitre, have all played major minutes in the past three years, and all will figure to start this season.

Molde and Carlos will, most likely, provide most of UP’s offense. Dorog will be returning as a spiker after playing Season 79 as UP’s main libero. Estrañero will remain as the playmaker, while Marian Buitre will be one of the team’s best middle blockers.

Past those four, UP’s other players are either rookies or bench players who are going to receive expanded roles this season.

UP will need to find a consistent middle blocker to fill the void left by Kathy Bersola. They also have two rookies – Josetti Thai and Patricia Siao – listed as liberos, the position which Pia Gaiser had admirably locked for the better part of the past five seasons.

Okumu also only started coaching the team late last year, and it will be interesting to see if the Lady Maroons have gotten over their growing pains by season’s start. 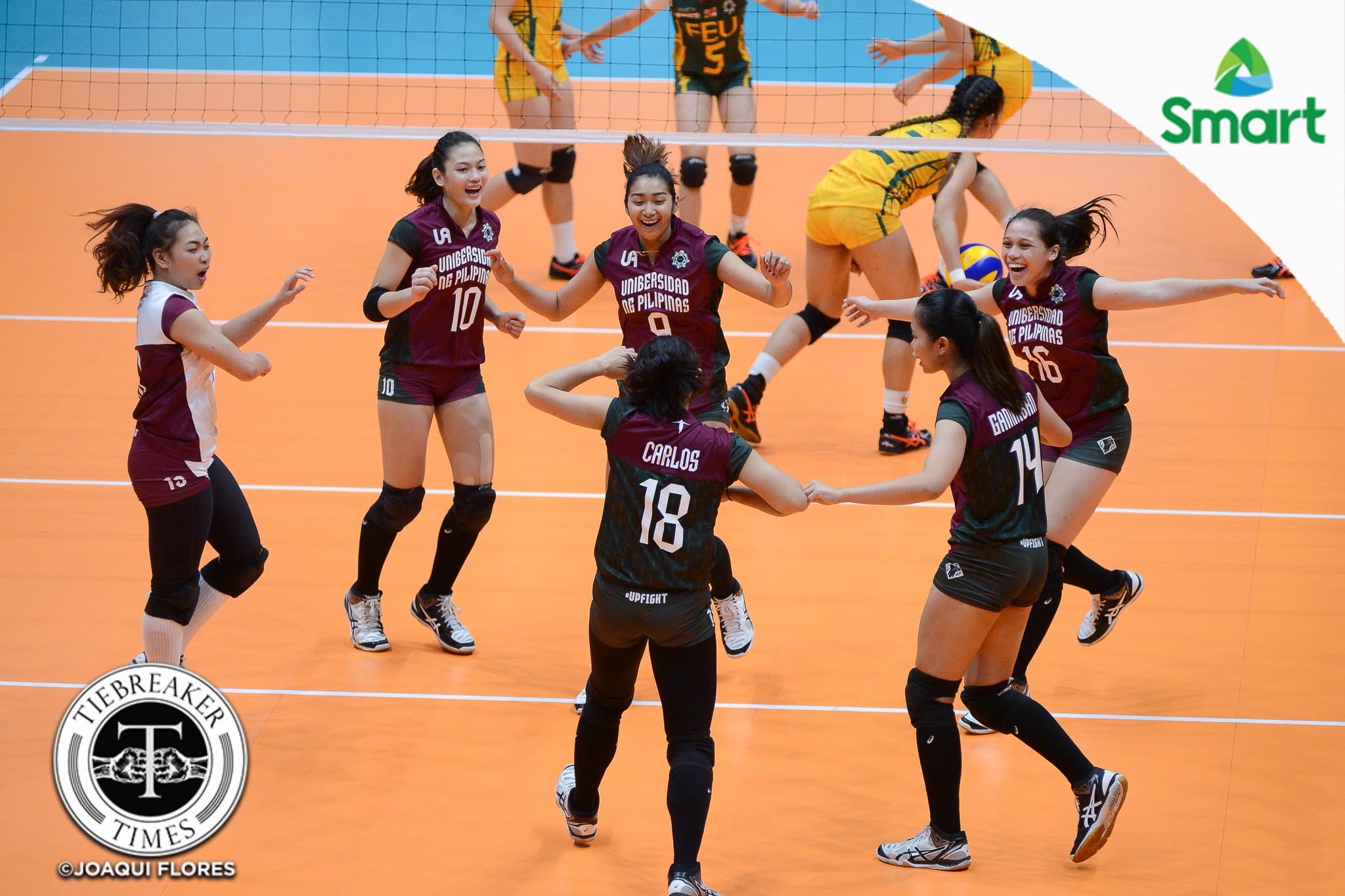 Compared to last season, expectations on the Lady Maroons have simmered. Last season, UP games were some of the most highly-attended matches, with a sea of Maroon filling and arena the UAAP games were held.

There might not be as much excitement for the Lady Maroons this season, especially at the beginning. But they still have the tools to make a Final Four run.

The lighter pressure from the community might end up favoring the Lady Maroons. But as coach Okumu fondly quips, they’ll need to score 25 faster than their opponents each set. Neither he nor the other UP supporters can score those points. The Lady Maroons will have to earn everything this season.

Another double-digit performance by Bagunas ends up in Oita loss