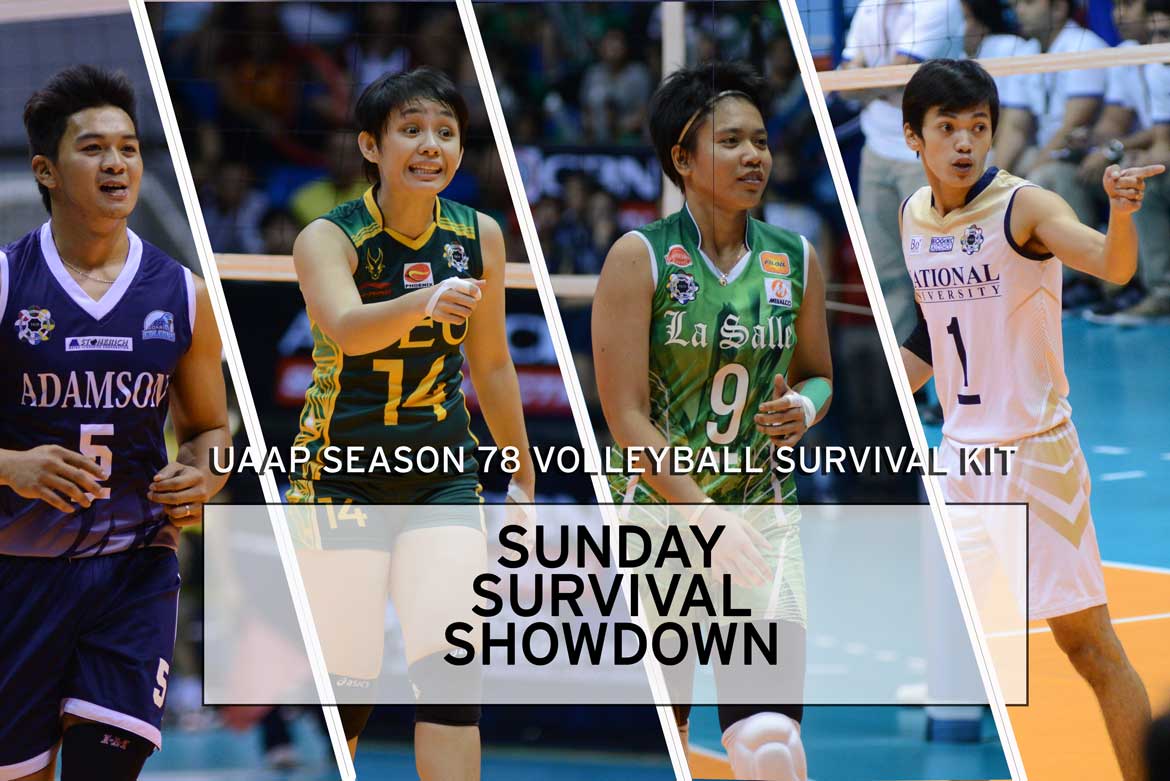 The battle between the second and third seeds in both the Men’s and Women’s Final Four present interesting cases.

All teams have glaring weaknesses. There are no overwhelming favorites. Predicting both matchups comes down to going off reputation.

Here we take a glance at the storylines for both matches starting with the Men’s tiff.

The Falcons had a peculiar elimination round. There’s more to their 9-5 record that meets the eye.

Adamson only had one straight-set win and needed to squeeze out three five-setters. They had incredibly close four-set wins aganst La Salle and FEU. They also lost a see-saw of a match to UST in the second round that probably gave coach Domingo Custodio convulsions during the match.

It’s safe to say Custodio has had a plethora of reasons to gulp down his team’s water supply.

Before the season, libero Rence Melgar had a will-he-or-won’t-he-play serye. Right from their first match, there was already in-fighting (WE HAVE A STORY ON THIS). Custodio then had to act like a head coach for the Lady Falcons. (THIS TOO) Most recently, graduating winger Bryan Saraza suffered a knee bruise while fooling around with a motor bike.

It’s a miracle the Falcons were even in contention for a twice-to-beat advantage. Add the fact that NU swept them in both elimination round matches, another early exit for the Falcons seems inevitable.

But the Falcons didn’t get to this point out of sheer luck.

What they lack in height, they make up for in speed – both of feet and mouth – and bounce. Aside from the long-limbed Dave Pletado, every other Falcon is either below or average height but they look like they can literally soar, most of the time.

Their attack isn’t limited to spikes or blocks, they also dent their foes’ self-esteem. They have the best trash-talker in the league in setter Nico Ramirez. His teammates prefer to Ric Flair screech at their foes’ face. Ramirez wants you to reconsider your life decisions.

Their rowdiness is probably an overcompensation for their own instability. While team captain Mike Sudaria does his best to keep his team’s emotions in check, most of Adamson’s problems can be derived from their mental approach.

They often start slow and rush to adjust only when they’re already down big. They’re effort visibly wavers each set.

It doesn’t help that their coach constantly screams at them during timeout. Domingo Custodio is the embodiment of no chill.

There’s a version of the Falcons — smart-serving, fast-talking, defensively-sound — that can beat the NU Bulldogs twice.

There’s another version of the Falcons — teammate-blaming, coach-glaring, mentally-unstable — they will wind up losing in straight sets again.
———

Beyonce was right: we should never for a second get to thinking we’re irreplaceable.

This season’s NU Bulldogs are taller, jump higher, and are more focused. Wingers, James Natividad, Bryan Bagunas, and Madz Gampong are in much better shape than their predecessors ever were. Although neither Fracis Saura nor Kim Malabunga can smash a running hit like Peter Toress, both are just as long and efficient.

But Vince Mangulabnan, the only remnant of NU’s championship days, holds this team together. Mangulabnan is the only graduating player on the roster. Everyone else is either playing on their first or second year.

The Bulldogs used the elimination round as a means to gel. They slowly picked up their floor defense and service reception to compliment their exemplary play at the net. While their passing still has ways to go, they can at least keep balls alive when they would have otherwise threw away a point.

When they were shoved to the corner, Mangulabnan was their unrelenting veteran voice. A transcendent setter in his own right, Mangulabnan often jawed at his teammates when they made petty mistakes. The young Bulldogs were better off with his vocal leadership.

If in past seasons NU had internal conflicts, the Bulldogs limited their struggles to on-court stuff which bodes well for them moving forward in the Final Four and future seasons.

Don’t be surprised if all of NU’s young core someday makes our National Team; they stand too tall and talented to be ignored.

As mentioned before, the Bulldogs had Adamson’s number in the elimination round. They frustrated the Falcons with their blocking and attacked ferociously on rebounds plays. It didn’t matter if Adamson received well, NU stifled them at the net.

Adamson reacts poorly to getting blocked. When the Maroons ran a block party in their elimnation round finale, the Falcons slumped and allowed UP to get off to big leads late in the match.

The klasmeyts can ill-afford to fall behind against NU. They need to be attentive on defense and try to cover NU’s blocks. If Adamson somehow winds up within a point or two of the Bulldogs late in a set, they should have the upperhand as NU is prone to giving up errors in pressure-packed situations.

If both teams show up at peak form, we could be in for a long series.

The last of a dying breed

FEU did a lot of things well this season to get to the Final Four: they were steady in long rallies, great at passing, and attacked decisively.

But they very well made their season when they persuaded Gyzelle Sy to come back for her final season.

The difference was apparent. Whenever coach Shaq tried to get cheeky and use his backup setter Kyle Negrito, they almost immediately struggled. This was exactly what happened when FEU lost a 2-0 sets lead on Adamson in the first round. They wound up losing their only match to a team not named Ateneo or La Salle.

Sy is a former Best Setter who only got better during her time away from the UAAP, marinating in the various club leagues she joined. She’s the last of a dying breed of setters; small, blocking liabilities but are amazing setters. At one point, small setters like Sy, Jem Ferrer, and May Macatuno ran the league. Now that team’s are looking for more athletic playmakers to defend against opposing open hitters, Sy represents a shrinking demographic.

The FEU offense runs smoothly with her calling the shots: Remy Palma smashes more running hits, Bernadette Pons gets better looks, and Toni Basas effortlessly glides in to finish near-side sets. It helps tremendously that FEU is in the top half of the league in receiving and digging.

When they took the Lady Spikers to five sets, FEU stumbled into their set wins as their foes coughed up errors. Count on La Salle to limit those errors. FEU has to score their own points.

Sy is going to be the catalyst of FEU’s attack. If she sets well, her attackers will have a better chance at cracking La Salle.

Statistically, the Lady Spikers do not have a weakness, being in the top two of every measured skill. They’re ahead of everyone in the league in scouting and preparation. It’s hard to knock their game.

But they do have a major weakness they haven’t directly addressed this season.

In the most recent Ateneo-La Salle clash, there was a long rally in the fifth set. Ateneo had three different attackers attempt a spike while La Salle went to Ara Galang thrice in-a-row, eventually leading to a Galang attack error on the third try.

This happens often to the Lady Spikers – even if they do get good passes, their attack stalls pretty quickly when checked.

As mentioned earlier, La Salle experienced the same problem against FEU in the second round. Up 2-0 in sets, the Lady Spikers’ attackers began sailing out or into the net. In their effort to keep attacks in, they went for weaker controlled hits which the Lady Tams turned into points. They eventually came to their senses in the fifth set.

Offensively, La Salle is miles ahead of last season when they relied heavily on Ara Galang. Kim Dy and Majoy Baron have stepped up to take much of the burden off Galang. Dawn Macandili is also an amazing passer – the best libero in the league.

The Lady Spikers have to react better if or when FEU punches them in the mouth and throws them off their gameplan. Against the Lady Tams, they can ill afford to slip into the same fifth set coma in the Ateneo match.

Most likely, the Lady Tams will need to force La Salle into errors. FEU has to show La Salle they can pass their serves and block their attacks – both lofty orders for a team at a height and skills disadvantage.

Riding a solid four-game winning streak, FEU has the momentum to extend the semifinals. La Salle, as always, has a chip on their shoulder. Any season without a championship is a failure for the historic program.

With a handful of seniors riding their last Final Four run, La Salle will come in with their La Salle swag and try to overwhelm the Lady Tams. It’s up to FEU if they’ll put up a fight and #ShaqTheWorld.