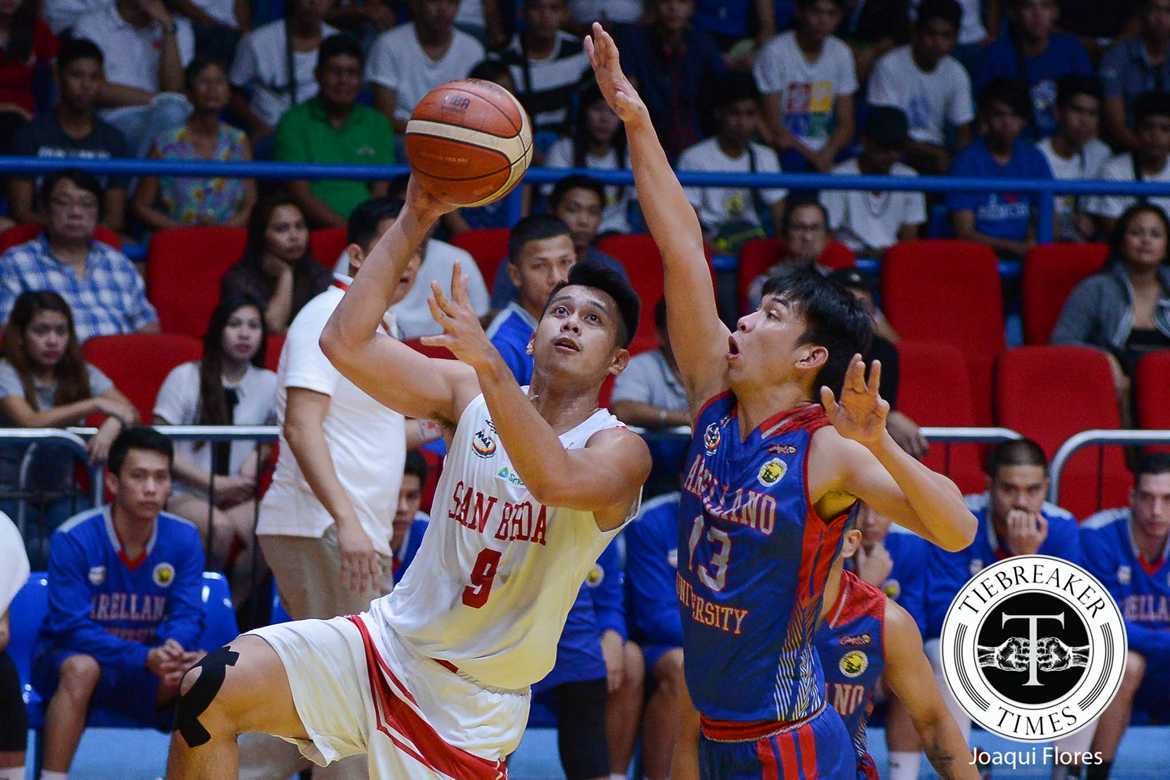 San Beda do not want to surrender their 10-year tradition of being the top seed easily.

The Red Lions played an excellent all-around game to sweep their regular season against the Arellano University Chiefs, 91-81, to force a playoff for pole position, Friday afternoon at the Filoil Flying V Centre in San Juan City.

With identical 14-4 records, San Beda and Arellano will face each other on Tuesday, September 27. The winner will face the Perpetual Altas, while the loser will be bracketed against the Mapua Cardinals in the Final Four.

However, for second year San Beda head coach Jamike Jarin, the playoff game for the top seed is an unnecessary NCAA tradition.

“It’s not a good ruling. In the elimination round, we look for twice to beat,” he shared. “I hope hindi na sana ganito ang ruling kasi twice to beat naman eh.”

“Of course, we’ll play our hearts out every game,” he vowed going into another game against the Chiefs. “We don’t want to be unfair and we don’t want to disrespect the game.”

Javee Mocon led the Red Lions with 19 points, 12 coming in the second half, while grabbing 15 rebounds. Filipino-American gunslinger Davon Potts added 18 points on 7-of-17 shooting.

San Beda did not let up in the game leading by as much as 16 points, 73-57, after a Ranbill Tongco layup midway through the third canto. However, you can never leave your guard down against the Chiefs.

Filipino-Canadian gunslinger Zach Nicholls finally came alive, leading the Arellano charge in the final frame. He was able to knock down three triples, while Kent Salado complemented the effort with seven fourth quarter points that cut the lead to just five, 81-76.

READ  Terrence Watson storms out of venue after disappointing debut

“That team is just too good to catch up. We listened to each other,” Jarin said about the Chiefs. “It’s constant communication. You have to be perfect.”

Mocon, though, took charge, scoring two straight baskets to stop the San Beda bleeding. A dunk by Ben Adamos, who finished the game with 12 pints and seven rebounds, sealed the win for last season’s runners-up.

Jio Jalalon was once again the high-point man for the Chiefs, but was limited to just 14 points on 5-of-23 shooting. He was able to grab eight rebounds and dish out eight assists.

Lervin Flores finished the game with a double-double 13 points and 14 rebounds.

The playoff game for the top seed is scheduled to take place on Tuesday, September 27, at 3:45pm.