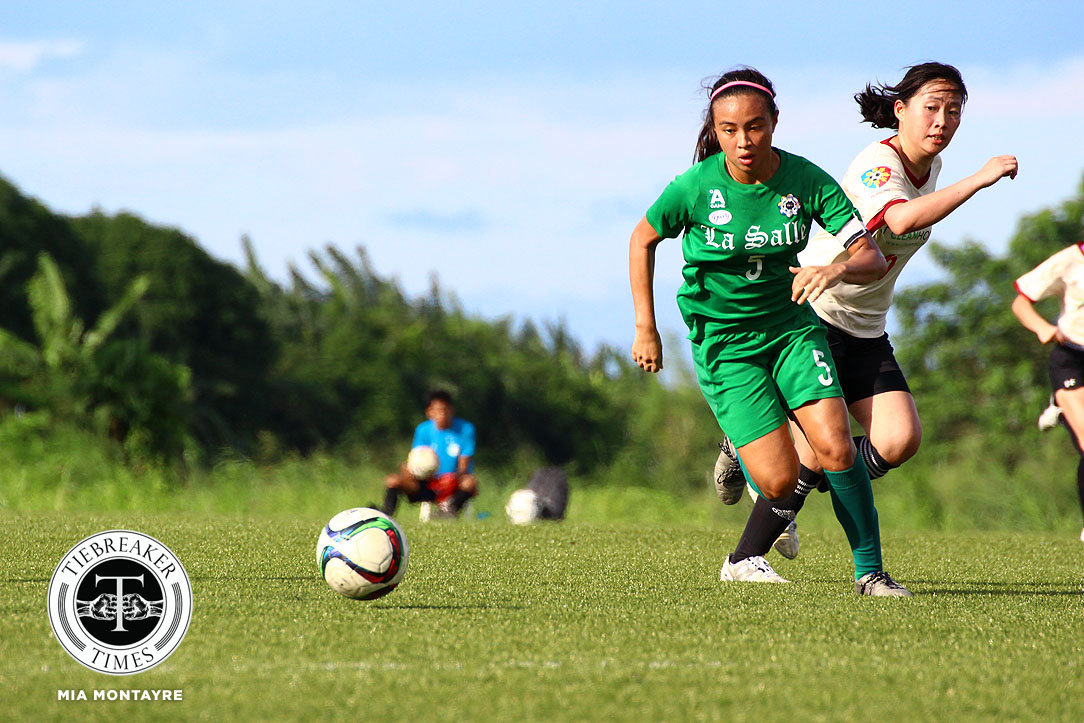 The PFF Women’s League had five matches this week, including one between Green Archers United FC and The Younghusband FA last Saturday in Cavite, which resulted in a default, prompting an automatic 3-0 win and three points awarded to TYFA.

It was a triumphant return to league play for De La Salle University after being on bye for nearly a month, and their 4-1 beating of surging club Hiraya FC keeps them undefeated and on top of the league.

In their previous meeting, Hiraya managed to hold off DLSU until the second half, but last weekend’s match saw the ladies in green needing only thirteen minutes. Kyra Dimaandal broke through Hiraya’s defensive line and thumped in a goal after beating the keeper, her first since July.

Hiraya were able to regroup after that and kept the scoreline as it was until halftime. After restart, Anicka Castañeda proved again how productive she for her new team when she blasted a 55th minute goal from long range.

Five minutes later, Cecilia Dayrit pulled a goal back for Hiraya, taking the La Sallian backline by surprise as she capitalized on a through ball into the box that ended with the keeper clashing with one of her defenders.

Unfortunately for Hiraya, Sara Castañeda decided to cancel this effort out after hitting from way off right to the far post in the 65th minute.
Dimaandal wrapped it up for the Lady Archers with a minute left until full time, the captain scoring her second of the match after some nifty combination play inside the box.

The Hiraya win means DLSU has not lost a match since nearly a year ago, a total of 11 straight victories, 20 if UAAP Season 79 were included.
Yet coach Hans-Peter Smit maintains the team is far from perfect.

“You can see the long layoff, it showed in the game. They’re not as fluid, that’s why you saw me screaming and screaming because I wanted them to go back to their old game. They were able to execute but not as often as I would want them to. Yes they were dominating ninety percent but you can say the shots that we had did not have too much power,” Smit said.

Even with the championship already secured, the La Sallian mentor promises his side will not relax with two more matches to go.

“I remind the girls that I want to keep a clean slate because I want to do history because no other football team has done this. Today is the 20th game straight, no loss, so I said let’s go for the 22-game streak, then let’s see what happens in the UAAP,” he added.

Far Eastern University have clinched the third spot on the ladder after a come from behind 2-1 win over the Ateneo de Manila University last Sunday.

It was the Katipunan-based squad that led after 26 minutes when Suet Simoy’s clumsy tackle on Jill Panganiban led to a penalty situation which Tessa Bernardo converted.

The Lady Tamaraws were able to equalize only six minutes later, after captain Jovelle Sudaria belted in a running shot from thirty yards out.
Moments later, the Lady Eagles had a chance to take the lead again after Hannah Pachejo fouled Bernardo while inside the penalty area. This time however, Kimberly Pariña was able to block Bernardo’s spot kick.

FEU capitalized on Ateneo’s missed opportunity 23 minutes into the second half when Mae Ann Caw-It jumped on a poor clearance for a near post shot that ended up being the match winner.

Pleased with the outcome, FEU coach Let Dimzon said they were able to work out the lapses from their previous games.

FEU now sit in third place with three points and one remaining match to go.

Dominant UST rain goals on frustrated UP to lock up second

The University of Santo Tomas Lady Booters were the first team to complete the first season of the inaugural league, and they finished with authority, sweeping the entire second round.

It would not be enough, however, certainly not enough to touch the pinnacle that DLSU are on, thus the UAAP Season 79 runners-up would have to make do with another bridesmaid finish.

UST were quickly on top of UP in just two minutes when Shelah Mae Cadag picked on Nina Yanto’s quick second touch pass for a dipping shot at the far post.

In the 21st minute, MJ Indac doubled the Lady Tigresses’ lead after cleaning up on Yanto’s attempt that hit the crossbar. Moments into first half stoppage, Yanto added another goal with a turnaround shot just inside the box.

Just like in their previous meeting, it was BG Sta. Clara who put the Lady Maroons on the board with a bouncing header seven minutes after halftime. The España-based squad responded quickly when Cadag drilled a low bouncing strike.

The Lady Booters continued to prey on the UP defense with Hazel Lustan adding a 57th minute goal that looped from the distance.

The Lady Maroons did not back down with scoring chances one after another only to be thwarted by the woodwork or with near misses. In the end, UST claimed a dominating 5-1 victory but their instructor was dismissive of the result.

Having played their last match for the league, she revealed that she was unhappy with the changes to the league format which reduced the number of matches, rendering it impossible for her side to challenge De La Salle for the title.

De La Salle University Lady Archers are clearly unstoppable at the moment. Not even the team closest to them in style and most familiar with their system and their players can put a dent on their onrushing success.

The Taft-based squad routed their Alabang-based counterparts 3-0 last Wednesday, November 15, at their own turf in De La Salle Zobel to stretch their win streak to 12.

Both teams were on equal footing for most of the first half until Kyra Dimaandal opened the scoring for La Salle yet again three minutes before halftime. Dimaandal took advantage of a defensive error inside the box before slotting the ball into the net.

In the 70th minute, Kyla Inquig finished on a low cross from Irish Navaja at the wings. Anicka Castañeda added a third goal in the dying minutes after some combination passes.

Even with an unbeaten streak going and a guaranteed title, DLSU remain wary of overconfidence.

“It’s flattering but we can’t nail it into our heads. The streak is like an incentive for each game. But like always, we take games one at a time. Credit also to our previous captains Inna [Palacios] and Meryll [Ledesma] for leading the team, they were big factors in our progress last year,” the present captain Dimaandal said.

The league’s leading scorer has racked up a total of 17 goals, but the in-form striker maintains she is far from it.

“I haven’t gotten my proper form yet, and I’ve been very lousy in games [so far]. I’m just lucky my teammates are great players,” Dimaandal added. “I wasn’t concerned [with my scoring streak getting broken] because I’m not focused on scoring for the meantime. [Instead] I want to focus on the team’s growth and how we’re going to play this upcoming UAAP season.

“It’s important to see the rookies step up and one way to make them step up is to let them score and make plays,” she closed.

The first season of the PFF Women’s League will close on Saturday, November 18, at the PFF National Training Center in Carmona with four matches: