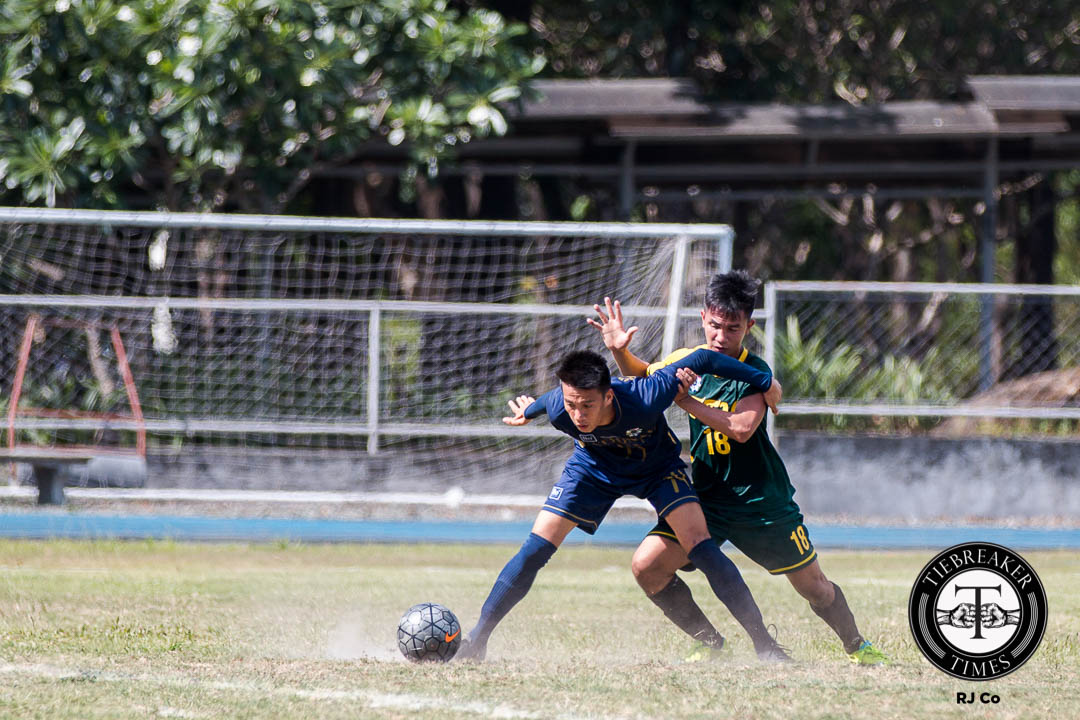 At this stage of the season, only a win would do. Any draw, or worse loss, will set a team back and will hand others the chance to capitalize. The UAAP Season 78 Men’s Football Tournament Final Four stage may still be a few weeks to go, but the pressure to get there with only a few games left is massive

The protagonists of today’s, 2:00PM, match at the Moro Lorenzo Field in the Ateneo de Manila University campus were two such teams. Both the National University Bulldogs and the Far Eastern University Tamaraws would be left with a glass half full after the match after they held each other to a draw.

With the number of quality forwards both schools possess, it was quite a surprise that the first half finished in a stalemate. That’s not to make it seem that both teams failed to attack. They did, it was just that goalkeepers Chris Perocho (NU) and Ray Joyel (FEU) were left to rush out of their area more rather than save some shots.

Unsurprisingly, NU followed their gameplan of recent games against title contenders by sitting deep and waiting for the opportunity to counterattack at will. It was left to FEU then to hold possession of the ball, which was indeed their natural way of playing. Arguably the best chance for the Tamaraws came when Eric Ben Giganto beat his defender and unleashed a shot, only for his attempt to go over the goal. Rico Andes then had a header via a Nicolas Ferrer corner kick, but the former’s shot was cleared.

FEU were perpetually frustrated at having been called offside for numerous times in the first half. On the other hand, NU only mustered two chances towards goal. Nico Macapal had a long shot which failed to test Joyel while the FEU wall thwarted Paolo Salenga’s attempt to score from a direct free kick. Before the break, though, it was FEU who threatened to break the deadlock after Joshua Mulero shot wide. The first half finished, 0-0, which was a fair result.

Come the second half, though, both teams furiously searched for a goal. Michael Menzi squandered his chance while Giganto had his attempt parried away for a corner by Perocho. Menzi then could have scored afterwards, but he failed to meet Dominique Canonigo’s fantastic ball insde the NU box. In contrast, it was Macapal who garnered chances for the Bulldogs as he was their most potent attacker of the match. Macapal had to attempts to score, only for his finishing to let him down as he shot over the goal.

After the opening minutes of the second half, it became apparent that Perocho was bound to be the busier of the two goalkeepers FEU had chance after chance, yet they still failed to score. Perocho rushed out of his area to clear the multiple dangers and he was able to save shots from Andes and Paolo Bugas. The biggest let-off Perocho and the rest of the Bulldogs came Renz Saldivar’s attempt was deflected towards Giganto, who then squandered it. That moment should have been NU, 0-1, FEU, but lady luck smiled on the Bulldogs.

#ReadMore  Black confident Alapag will be a good coach for Alab

Lady Luck, though, also smiled at FEU. From a counterattack at their half, NU swiftly broke free towards the FEU goal. Macapal forwarded the ball wide to Viray who’s eventual attempt hit the crossbar. That wasn’t the last motion of the play, however, as the ball landed to Macapal who, with the goal at his mercy, still failed to score as he hit the post. That was a painful miss and NU should have brought all three points at that moment.

There were just few minutes left in the match. Perocho again denied Andes. The full-time whistle blew and both teams, especially FEU, had every reason to be frustrated as their multiple chances should have warranted at least one goal. The result left FEU at first place with 24 points, while NU had to make do with 16 points at 6th place – 2 points behind the Final Four.

NU will play the University of the Philippines on Sunday (April 10, 2016; 8:00PM) at the McKinley Hill Stadium in Taguig. On the other hand, FEU will play Ateneo five hours earlier on the same day and venue.

NU head coach Lem Laranas was understandably dismayed with how the game panned out. Laranas, though, still had hope for the Bulldogs’ remaining games. “It’s like every time I talk to them, yung fire naman nandiyan pa hanggang matapos ang season. Talagang willing pa talaga sila. Hindi pa sila nag-surrender as of the moment.”