When someone decides to chart the history of Philippine football, a chapter needs to be written on the impact of Ceres-Negros Football Club—  not only on the country’s domestic competitions, but also its success in the continent.

Unfortunately, the club is in a time of upheaval, as it currently searches for new investors to continue its operations. Two players who have been part of the club’s glory days, Bienvenido Marañon and OJ Porteria, shed light on their time with the club with Cedelf Tupas in the July 7, 2020, episode of the Tiebreaker Vods’ Crossover Podcast, presented by SMART and supported by LGR.

“The zonal final in 2017. For me, it was very big because prior to the final, I was struggling personally with how I was playing. So I don’t know if you guys remember this, but the game that we played at Home United in Singapore,” said Porteria.

If there was one campaign that proved Ceres and its owner Leo Rey Yanson were serious about becoming a powerhouse team in Asia, it was its run in the 2017 AFC Cup. By that time, the Bacolod-based club was already a powerhouse team domestically in the UFL and PFL. What started as a dream ended up as a historic achievement.

“I was dropped for that game. So when we went to Bacolod and play in the final (for the second leg), it was huge in the second minute to score in the final. It was a very very big moment for me,” added Porteria on the team’s crowning moment as the 2017 AFC Zonal Winners for Southeast Asia.

“It was crazy because I think twenty of my family members from the US, in Cavite ,and they went to Bacolod to watch that game. And when we have those AFC games in Bacolod, it’s always packed and the atmosphere is unquestionable. The people there really love football, and I can’t wait to play there again.”

And Spanish forward Marañon was instrumental in that glorious journey. In 10 matches in the said tournament, the Cadiz native scored an incredible he goals. He would then demonstrate his brilliance in the following campaign, this time in the preliminary round of the 2018 AFC Champions League. 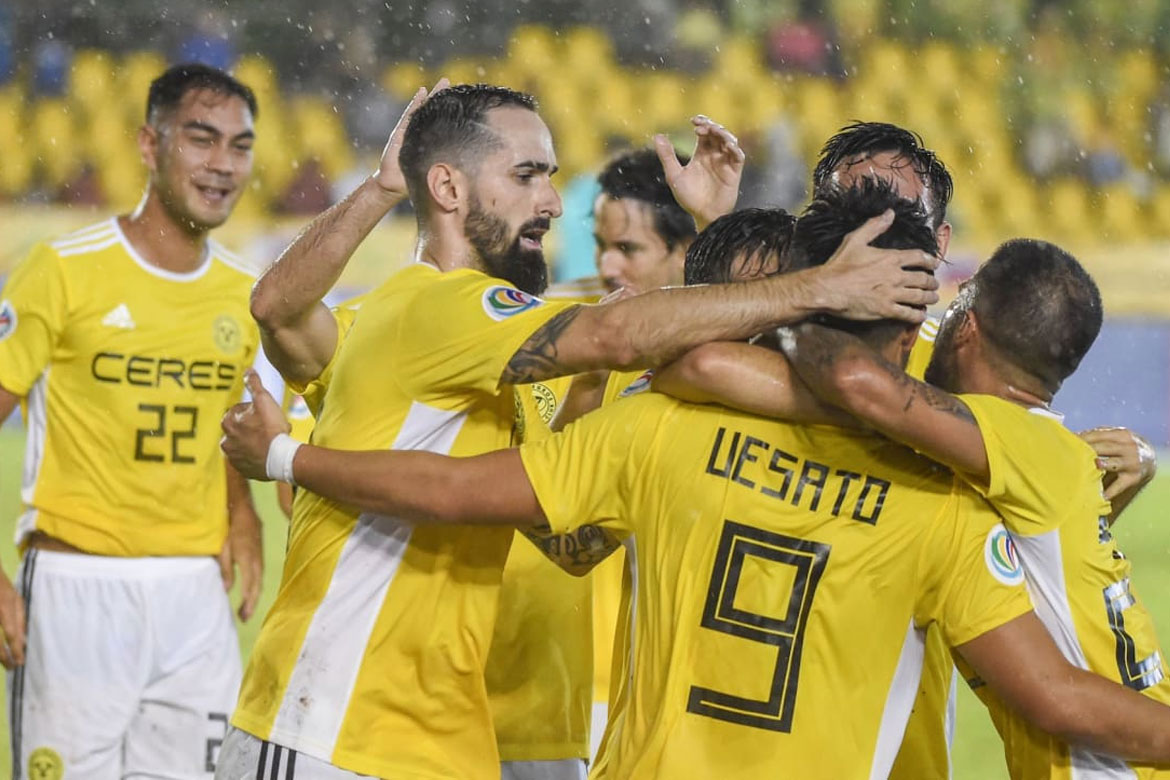 “For me, if I have to choose one, it’s when we play against Brisbane Roar in Australia. I scored two goals, then we won. We played well because at the beginning, they were defending but then… [It] was very dangerous and I was lucky to score two goals then. We were able to go to China to play there,” said the 34-year-old.

To say that the Busmen were underdogs was an understatement. Many pundits expected Brisbane to rout Ceres and coast towards the next round. Thankfully, Risto Vidakovic and his men managed to pull off what was an unthinkable result despite only beating Shan United away through penalties.

“No, of course (we didn’t expect to win),” explained Maranon.

“We just went there to enjoy. We know that we have a really good team, but at that time, we weren’t fit. We just played one game in Myanmar.

“We were just three days in the Philippines, we went there, we played there, and then one week to play in Australia. So at the beginning, at the first 50 minutes, even when they scored, we thought that they were gonna win 5-0, 6-0. But then when we scored the first goal, then our team believed and we can win the game. No, I cannot say that we won very easily, but I felt very comfortable after 1-1. We scored 2-1, we scored 3-1, and until then, they didn’t score their 3-2,” he added.

The win was sweeter because Ceres was able to instill a sense of humility in the Brisbane Roar players. It goes to show that underestimating opponents can backfire embarrassingly.

“I started that game. It was crazy because I don’t know if Bienve knows this, but you know… Before we walked out on the pitch, I was noticing a lot of the players from the other teams just looking at us and laughing a little bit,” said Porteria.

“I feel they didn’t respect us, and I feel that that kinda showed during the game. And we showed that we really wanted to win that game. We didn’t quit, we didn’t stop fighting, we were up 3-1. They ended up scoring at the 86th minute so it was 3-2. We had to really fight to keep that win and I’m extremely proud of the boys, amazing goal, and Omid (Nazari) scored.”

The win against Brisbane and the underestimation became the precedents for another huge upset in favor of Ceres.

Two years later, talisman Stephan Schrock propelled his side to a 1-0 away victory over Port FC in Thailand in front of over 6,000 fans in the 2020 AFC Champions League preliminary round. 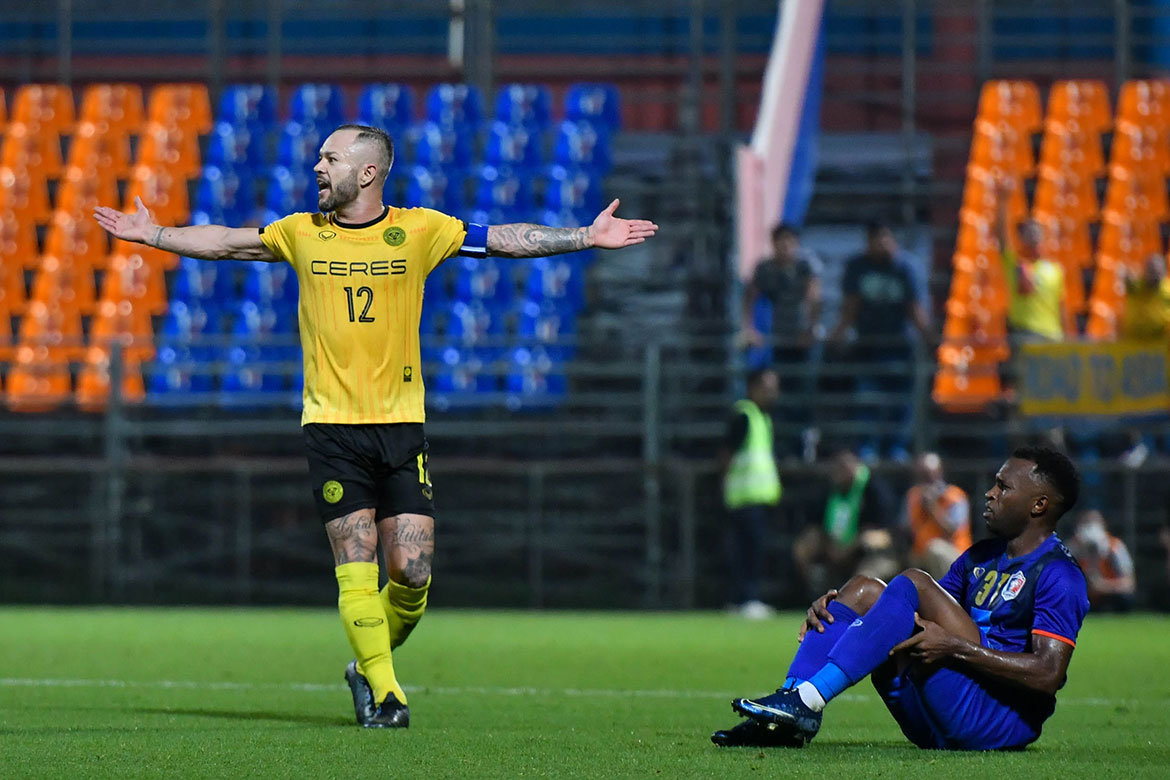 “What OJ said was true. When we were walking inside the field, they were laughing about us and after the game, they were like crying. It was like, oh my god, these guys know how to play. That happened this year also when we played against Port in Thailand. They were thinking like they are a really big team, they are better than us.”

Ultimately, all of these achievements came from the direction of Yanson, whose mentality to win rubbed off on his team as they sought to bring glory to their club, city, and the Philippine football community whenever they play abroad.

Whatever happens from now until the resolution of the prospective takeover, Ceres’s legacy shall never be forgotten.

“It’s unbelievable, especially for me, coming here in 2012 and seeing how the UFL and how the league was to have a club that’s playing against the likes of Alexander Pato, Anthony Modeste. These are things that I couldn’t even imagine before, and it just goes to show the support and the dedication that boss LRY and the management and Coach Risto had and their ambitions. I can’t believe it — a team from the Philippines.” 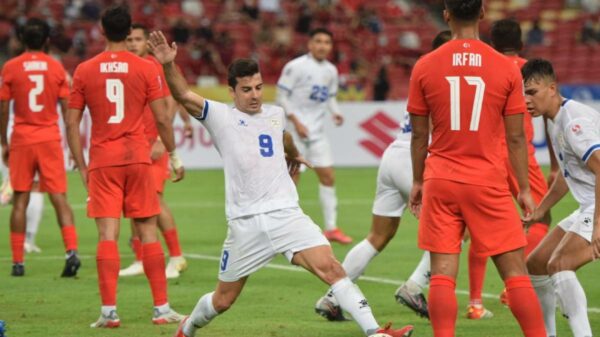