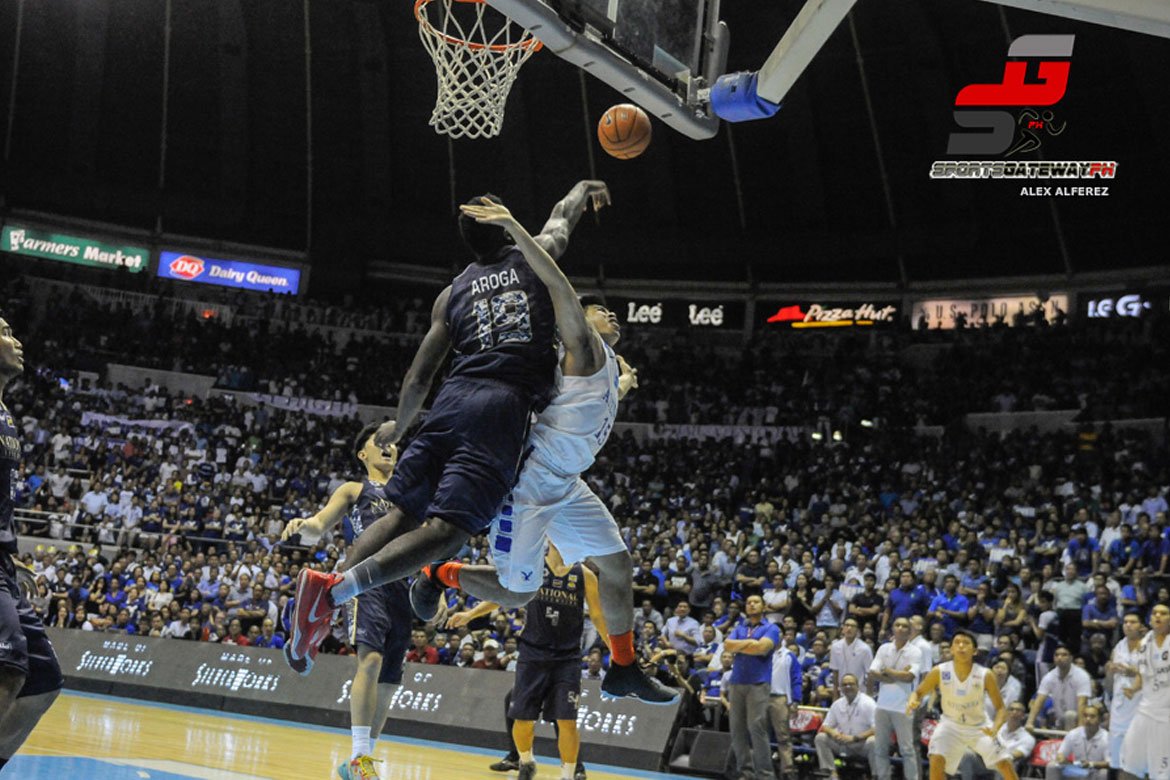 On that stormy Wednesday afternoon, National University and Ateneo fought for dear life inside the SMART Araneta Coliseum.

There were 18,000-plus fans inside the Big Dome. And despite an almost twenty-minute power interruption, the crowd was on the edge of its seats while the Bulldogs and the Blue Eagles scratched and clawed their way to the prize — a UAAP Season 77 Finals ticket.

With 9.3 seconds left, Ateneo — who was trailing 63-65 — had the ball. And who else would the Blue Eagles trust but main man Kiefer Ravena?

By then, Ravena had already tallied 18 points, seven assists, four rebounds, and two assists, Able to get the ball off a timeout, he drove past his lockdown defender. With much time left, he could have either gone left for a jumper, or right to attack the rim.

Ravena chose to go right. And waiting for him was Alfred Aroga.

As Ravena soared to the air with three seconds left, the 6-foot-7 Cameroonian student-athlete jumped with him. Locked in on the ball, Aroga swatted Ravena’s attempt.

As a scramble ensued, Aroga plucked the ball away and ran to center court with the ball held high up over his head.

Six years later, Aroga, some members of the Bulldogs, and Ravena were able to look back on that iconic play in an episode of The Prospects Pod, presented by SMART Sports and supported by Chris Sports.

And for Aroga, that block was two years in the making.

“I want to tell Kiefer my mindset concerning Ateneo since 2012.

“Why 2012? Because I remember when I got into the Philippines, I went to the arena and NU was playing against Ateneo. That was the first time for me to see a basketball game like that, with a lot of fans, TV, and everything,” recalled Aroga of a game that happened back on July 22, 2012 that saw Ateneo blow out NU, 89-65.

“So I was observing Kiefer the whole time because I’m a good observer. He was professional-ready already by that time, the way he was acting, the way he was warming up, the way he was playing. And I asked Luigi, I asked who is that, and he said he is one of the best players in the country. And so when they whipped the ass of NU, I told Luigi [Altamirano], ‘Bro, every time I’m gonna play against Ateneo and Kiefer, they’re gonna suffer’,” he continued.

Aroga indeed dominated during his debut season every time he faced Ravena and the Blue Eagles.

He  had 11 rebounds, nine points, and a block during their first-round encounter that saw NU win 64-60. In the second round, Aroga flat out romped Ateneo, tallying 15 points, 11 rebounds, and eight blocks to lead his squad to a 76-66 victory to complete the elimination round sweep.

In Game One of their Final Four encounter, Aroga had 11 points and 13 rebounds to power NU to a 78-74 triumph and set up the win-or-go-home game.

But before entering Game Two, Aroga received an anonymous text. The message? ‘Throw the game.’

“The second game I was a bit nervous. Why? Because I remember I went out for dinner and I was approached by someone. Later, I was having text messages because they wanted me to not bring my A-game on the court,” recalled Aroga.

“They wanted me to go easy on the game. Like I’m gonna play like I’m sick and on the side and I’m gonna have something in return.”

He confided in coach Eric Altamirano about what happened. And the fatherly mentor only told Aroga one thing, “Don’t worry about it. I trust you one-hundred percent, I know you would never do that.”

That was all the motivation he needed. Then it happened.

“In the Philippines, they know me as a defensive player. And the block I had on Kiefer, if you try to see the video… I don’t know for some reason, I had this instinct that he would go exactly where he was going because I was following the big man. And I had to push Troy for me to have more balance and go and block Kiefer, so when I had that block, ‘Oh my God!‘,” shared Aroga, who is serving as a motivational speaker nowadays in Dallas, Texas.

Aroga and the Bulldogs then went on to win a grueling three-game Finals series against Far Eastern University to end the school’s 60-year title drought.

Rest in peace, our friend.

Despite PBA-B.League issue, Guiao assures Kiefer Ravena has not changed

NLEX head coach Yeng Guiao has nothing but praises for the professionalism shown by Kiefer Ravena, which has kept the Road Warriors focused despite...