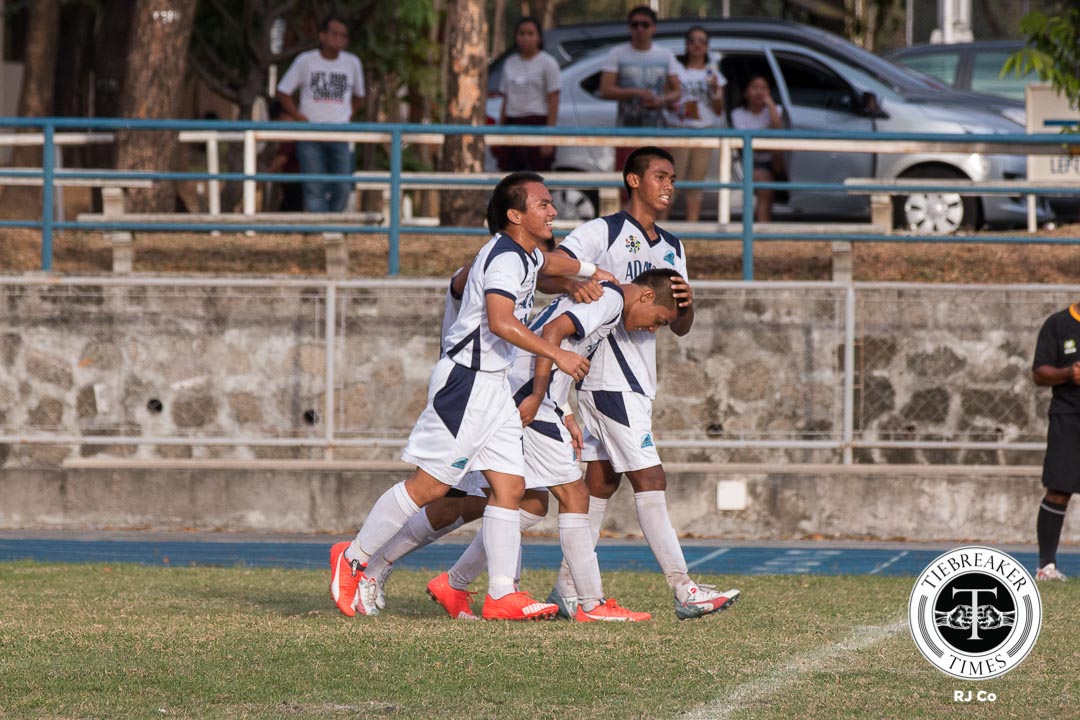 After collecting their first-ever win, Adamson University nearly followed it up with another one. In their most recent game against the University of the Philippines, Adamson succumbed late with a 1-0 defeat. Harsh as it may look, the Falcons gave a good account of themselves against one of the league’s traditional superpowers.

The Maroons came into the game on a high after recording two straight wins. As for Adamson, an inaugural victory midweek appeared to have galvanized them against the boys side from Diliman.

The game-winning moment eventually belonged to Maroons’ rookie Daniel Saavedra, who lashed a wonderful effort that was deflected by Adamson center back Jackson Ramos in the 89th minute. It was an unfortunate break for the Falcons, as a draw would have been a good outcome with how they had been able to frustrate UP.

Interestingly, Adamson even came close to shocking the Fighting Maroons. Noted by many people as a defensive unit, Adamson took a step out of their comfort zone and looked confident that they could win their second game last Sunday. Still at 0-0, Brian Jumo (II) was denied by the goalpost 63 minutes into the game. Teammates Harold Feliciano and Jusuel Pilarca also made sure that experienced UP goalkeeper Ace Villanueva wouldn’t just stand still throughout the 90 minutes.

For Nolan Manito, Adamson’s head coach, the past few days have been a source of both pride and fulfilment. Three days before making the Maroons sweat, they got themselves a win against the ailing University of the East Red Warriors. Having seen that his players have matured not even two years into the reinstated program, the Adamson tactician keeps reminding his players to continue laboring for them to reach their goals. “Sinasabi ko as kanila na matuto palagi sa bawat pagkakamali. Kailangan matuto at maghirap,” he declared.

Losing to what he sees as an own goal by Jackson Ramos, Manito felt it was a break of the game that had gone to UP, something he has no problems with. “Pagka-sipa, gusto niya i-head ‘yung bola [palayo] kaso deflection. Daplis diba, tapos eksakto napunta sa goal,” he admitted. He also felt proud of how they held their own against a team that has more experience and quality.

Meanwhile, Ramos was slightly dejected. The second year defender believes their opponents had gotten lucky that his attempted intervention on Saavedra’s shot led to the breakthrough goal. It spoiled what had been a magnificent game for him. Ramos played an integral role on the night by keeping the UP frontline in check for most of the game. Nevertheless, the captain is pleased with how things have changed for the better for his team in Season 78. “Mas pursigido kami. Double effort namin para mag step up lahat,” the defender commented.

Meanwhile, Manito felt flattered, having heard that his counterpart, Anto Gonzales, had heaped praise on his team. “Masaya pakinggan ‘yung ganoon lalo na si coach Anto [ay] champion coach.” Gonzales looked relieved after the match as his players had seen off the challenge given to them by Adamson. The UP mentor thought that had Adamson kept up the pressure on his makeshift backline, they would have made it a different story altogether.

It does not get easier for the Soaring Falcons as they brace themselves for two heavyweight opponents this week. Tomorrow, they will play against the unbeaten De La Salle University Green Archers. Three days after, they are scheduled to tussle with the reigning champions, the Far Eastern University Tamaraws. As his team goes up against each of last year’s finalists, Ramos is looking forward to the tough week ahead. “Nandito na kami. Hindi kami magpapahuli,” the Adamson captain uttered.