Playing for the national team at any level is one of the most incredible achievements that athletes can fulfill in their careers.

James and Phil Younghusband both played for the Philippine National Men’s Football Team from 2005 to 2019. And the two will always be remembered synonymously with the growth of the Azkals. In an interview with Cedelf Tupas in the June 30, 2020, episode of the Tiebreaker Vods’ Crossover Podcast, presented by SMART, the duo shared some of these experiences.,

“I think the old training camps where you’re together for six weeks — I think that’s why we had the success in 2010 (AFF Suzuki Cup), because with the six-week camp with each other. You are constantly bonding with the teammates and the coaches,” shared Phil.

Back then, football was very much in the wilderness in the Philippines and it was the 2010 AFF Suzuki Cup that brought it back to life in the nation. From that point onward, local sports fans witnessed the rebirth of a national team that became a competitive entity across the continent. The pressure was on for the Azkals to achieve glory in its different competitions.

The next major competition for the Philippines after its 2010 AFF Suzuki Cup exploits was the 2012 AFC Challenge Cup. From not qualifying for the previous edition, the Azkals earned a third-place finish, with Phil finishing as top scorer with six goals. It was also arguably the highest point during the reign of coach Michael Weiss.

“And your body is adjusted,” said James who added, “We went out three weeks before the tournament, and we actually had to rough it out in Nepal. Me and Phil we were freezing cold, and there was no hot water in the hotel, and we only had a small radiator, the electric one. And after training, I showered but I was so cold, so I sat down on the floor. I was naked cold up to the body next to the radiator and like, ‘Oh my god! What is going on?’

“But Phil is right, those weeks you get time to bond… The coach gets to work on what he wants to work and you have that right preparation.”

“When you’re going for those hardships, everyone was getting through the same thing so you’re not alone in the experience. And that’s what brings you close, because you’re doing it with your friends and your teammates,” said Phil.

he advent of the Azkals’ success has encouraged the recruitment of professional Filipino-foreign players abroad to augment the team’s lineup in its international friendlies and tournaments. While the level of the pool has risen, the same cannot be said for the squad’s chemistry.

“Nowadays, it’s very hard with the level of players coming in… I mean with their professional clubs, you know you can’t do that anymore.

“I think we’re coming in with better players but we’re not as tight-knit, we’re not as close. We’re not going through these hardships together, we’re not spending three weeks before the tournament together. So [if] you don’t go for those things together, it’s hard to understand each other on the field,” said Phil.

Still, certain players stayed longer than most in terms of wearing the Azkals jersey. They started out being teammates with the likes of Chris Greatwich and Chad Gould, and ended their run playing alongside Javier Patiño, Alvaro Silva, and Daisuke Sato.

It is a testament to James and Phil’s commitment and talent that they were able to get 100 caps each while playing for the Philippines. Playing so long and becoming centurions for the Azkals never crossed their minds when they first started out.

“It started to become possible when we got more games coming up, because before we only have one tournament a year. The first international friendly I had for the Philippines was Singapore back in 2008, early 2009. After 2010, when more games were happening, more tournaments, I think then it became more possible. Yeah, Phil’s right — I think when you get past 90, but me, when I got towards 60, 70… It was one of my goals (then) to get to that milestone,” said James.

With a combined 209 games for the Philippines under their belts, the Younghusband siblings had memorable goals while playing under the Azkals jerseys. These are the joyous moments that are so significant that the two could never forget them. 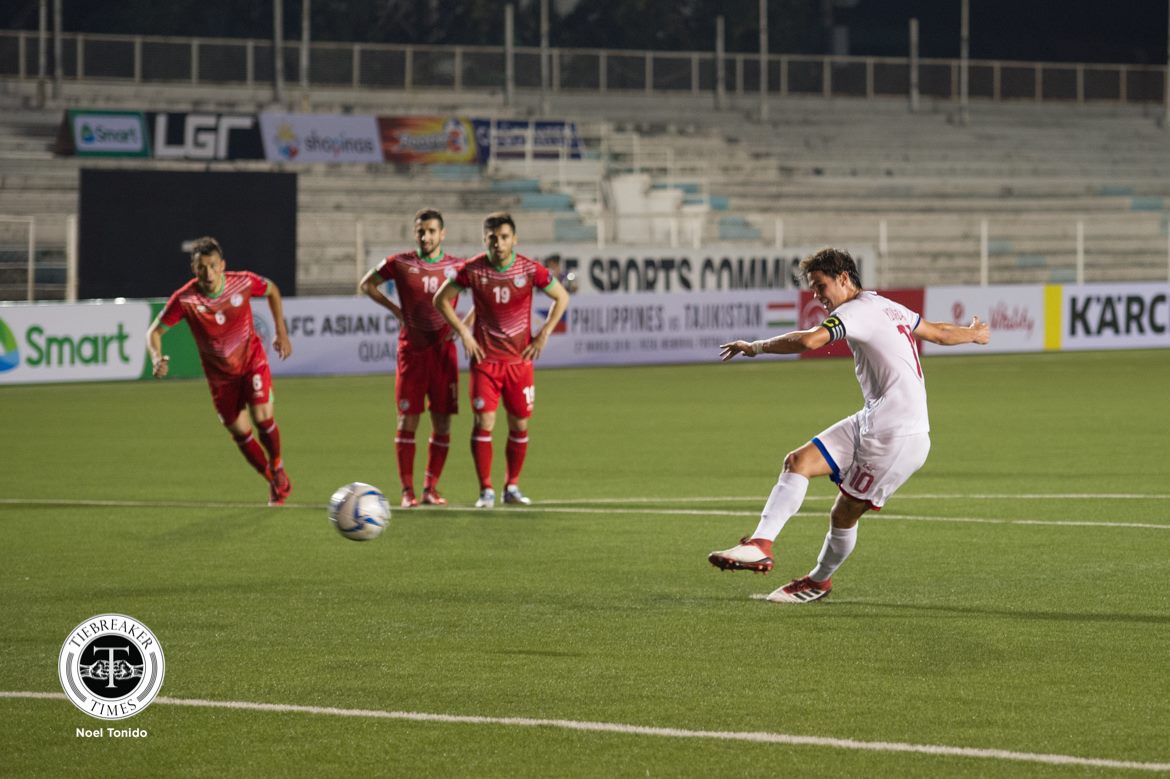 “Best goal? This is a personal one — it was a friendly game, but I got a goal against Nepal (on October 11, 2011), because that was the game right after our mom passed away. I was just so emotional that time and it was a goal I dedicated to my mom,” said James.

“I got quite a few. The Vietnam goal, the second goal (in the 2010 AFF Suzuki Cup). The goal against Mongolia in Bacolod (2012 AFC Challenge Cup qualification) in the last minute. I think a lot of it is down to the atmospheres during those games, so I say those two really stick in my mind,” said Phil, who ranked these strikes higher than the one he scored against Tajikistan because it was from the spot.

Both of them, though, mentioned Phil’s goal against India in the 2012 AFC Challenge Cup as a memorable strike because they combined for it to happen. Then in terms of matches, a few certainly stand out from them than most.

“Another result I like is the four-nil against Indonesia (in the 2014 AFF Suzuki Cup) because we were beaten for years.”

On the other hand for James, it was May 29, 2016, match against North Korea that was the most special for him. It was his comeback game for the Azkals, and just being part of the team made him so happy despite being only on the pitch for seven minutes.

“It just felt good. That one, I just went all-out and ran as fast as I could in that game. When Iain Ramsay scored, coach (Thomas Dooley) ran from the sidelines and hugged me, you can see that on camera, especially. He took me out of the squad and I respected that decision and in the end, I could say I managed that one pretty well. For me, that was my one, and it’s against North Korea.”

Now that both of them have hung up their boots, it is a case of the siblings looking forward rather than backward from here on. They still have huge hopes for Philippine football and for themselves as well as personal goals in the sport.