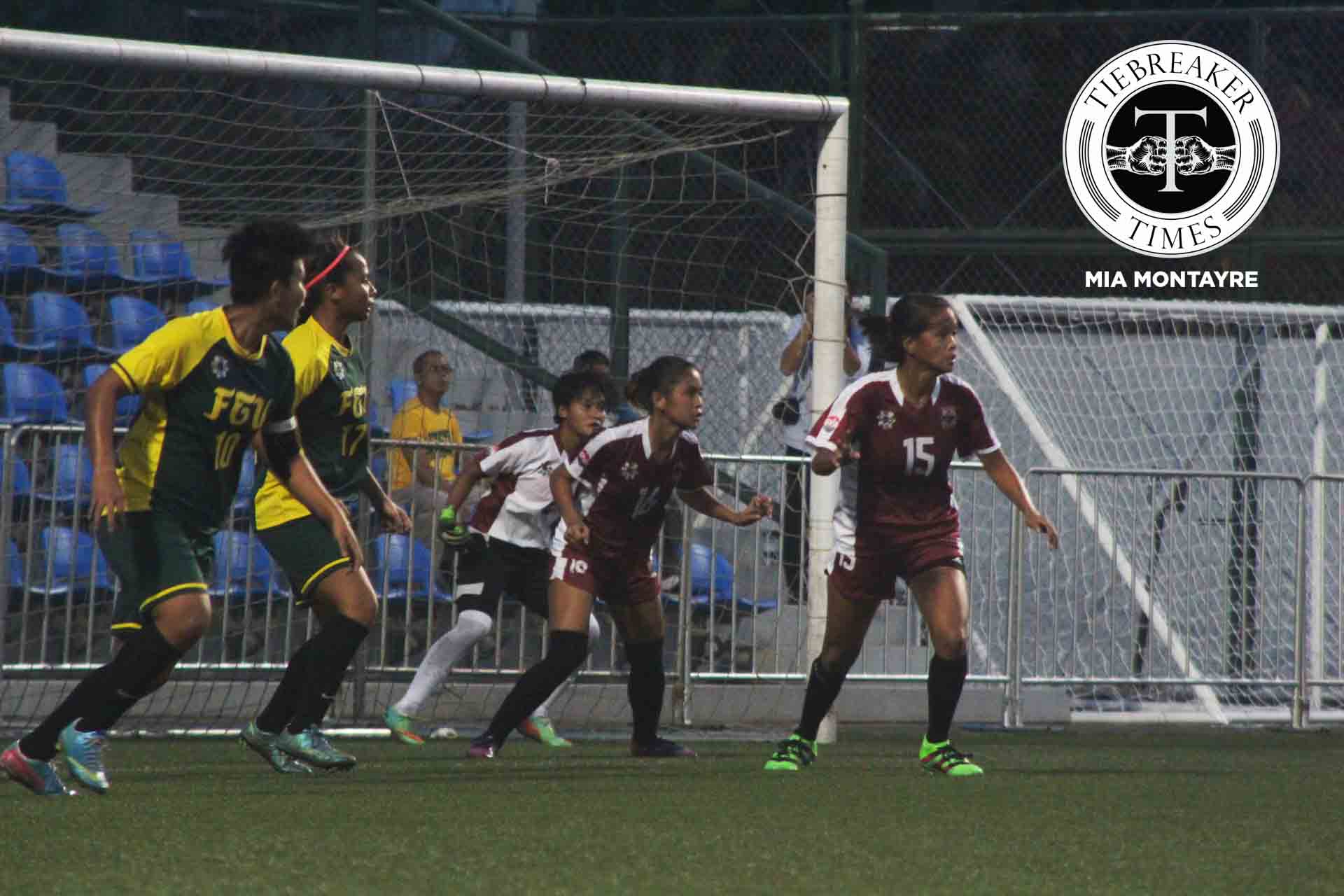 In a tension-filled encounter, the University of the Philippines Lady Maroons and Far Eastern University Lady Tamaraws drew, 2-2, at the McKinley Hill Stadium in Taguig. It was the second time both teams faced each other in this UAAP Season 78 Women’s Football Tournament, with UP aiming for revenge after FEU defeated them, 1-0, in the first round.

At the end of the game, though, both teams had to endure a frustrating ending. Cristina de los Reyes (9′) and Mary Rose Obra (32′) were the goalscorers for the Lady Maroons while Jovelle Sudaria scored a brace for the Lady Tamaraws (18′ & 35′ penalty). The result was also the first draw this Season 78 and both teams lamented the two points dropped. UP were now at 2nd place with 10 points while FEU were 3rd with 7 points.

The first half was when both teams let loose. It was UP, though, which started the brighter of the two. In their first meaningful attack, Obra played a through ball towards De Los Reyes, who then unleashed a shot at FEU goalkeeper Kim Parina’s right post. De Los Reyes performed a fine finish, but perhaps Parina could have done better at the 9th minute..

Both teams played aggressively in the first half. However, it was FEU who created more chances after the first goal was scored. Alesa Dolina had a free kick which went out. Moments later, though, Sudaria scored her first goal of the evening when she intercepted the ball at the edge of the box, dribbled and then unleashed a powerful shot towards the net at the 18th minute.

Sudaria and her striker partner Marie Lecera both could have doubled FEU’s lead afterwards, only for finishing to let them down. Out of the blue, then, came Obra’s goal. BG Sta. Clara raced through her flank and delivered a fantastic cross into the FEU box, with Obra supplying a header as wonderful as the assist at the 32nd minute. Parina had no chance to save it.

Just three minutes later, though, FEU capitalized at UP’s susceptibility at the back. The UP backline committed a handball inside the box and the referee had no choice, but to point to the spot. Up stepped Sudaria and she made no mistake when she directed her shot towards the right side of the goal at the 35th minute.

Despite attempts from Sudaria, Dolino and Sharmaine Siaotong, FEU had to make do with the scores level, 2-2, at the break. In addition to FEU, UP also had reasons to be frustrated after they as good as failed to impose themselves the way they could in the first half.

After the break, it was still FEU who controlled the match. Sudaria forced a goalline clearance from Cassandra Alleje. Lecera was then played through on goal, but UP goalie Arriane Javier rushed to clear the danger. On the other hand, UP threatened FEU mainly through De Los Reyes. De Los Reyes had two attempts on goal, only for Parina and some wayward shooting to let her down.

Late in the second half, it was FEU who created more chances. As it is in Football, however, if you can’t finish, then you don’t have the right to score. Siaotong ang Lecera shot over the bar and the best chance to win the match arrived for Sudaria, but the resulting shot went wide. That was the match there. After ninety minutes, the two teams had to settle for a, 2-2, draw.

Head coaches Let Dimzon (FEU) and Anto Gonzales were understandably frustrated after the match. Dimzon explained, “Actually madami kaming first half na attempt sa harap. Yung finishing is medyo poor, yung touch atsaka yung power (were poor).” Meanwhile, Gonzales said, “We should have finished stronger. I though we had few players who couldn’t finish the game the way they started. We started very strong but towards the end, halos wala ng atake because some players weren’t working anymore.”