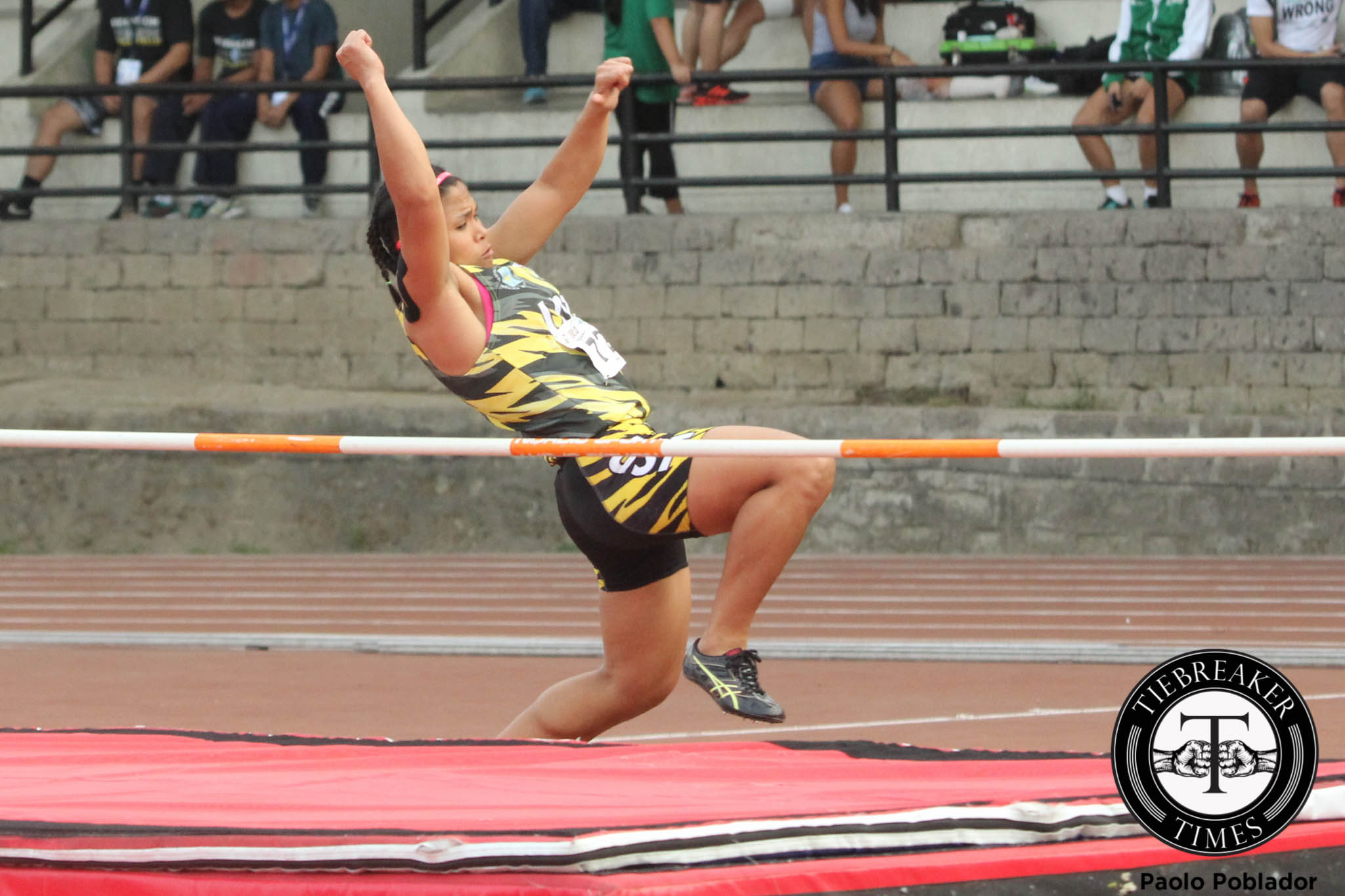 The University of Santo Tomas (UST) continue to dominate the hunt for the overall championships after consistenly nabbing podium finishes for two consecutive days. Their performance in day three will determine if the University of the East (UE) or the Far Eastern University (FEU) will be overtaken or will be the ones to overtake. The third day is crucial, as it could set up a school’s momentum going into the final stretch.

The graduation of UE’s Jennyrose Rosales has been felt throughout the competition as new and old competitors emerge to try and fill her shoes.

The women were given time to rest as the track was prepared for the 3000m walk. Winning another gold in the racewalk was UST’s Krisha Sardenia who clocked 17:13, securing the coveted double gold in the 3000m and 5000m. It was an early celebration for UST’s hunt for the championship as they widened their lead thanks to Michelle De Vera who won silver with a time of 17:21. The University of the Philippines’ (UP) Elizabeth Capiosio happily settled for bronze with 17:35. These were the only women who clocked sub-18 in the event.

The track was now set for the final of the women’s 400m. It was still anyone’s race at this point as the variance of the qualifying times was small. Both Ynot and Pamatian battled it out in the last 100m with the latter managing to pull through. Pamatian won gold with 57.93 seconds while Ynot had to settle for silver with 57.99 seconds. FEU’s Mary Avila was not far behind with a time of 58.77 seconds.

Despite the fast time in the finals, Rosales’ shoes have yet to be filled. Her UAAP record of 54.45 seconds is still miles away from the field.

The seven-and-a-half lap 3000m steeplechase was the second-to-the-last event of the night. FEU’s Joida Gagnao owned most of the race and won comfortably with 11:39. Adamson University’s (ADU) Lyca Sarmiento, who’s had a good season so far, finished silver with 12:00. Gagnao’s teammate Jonez Sustiedo 12:08 alleviates the damage UST has done so far in the point tally by winning bronze with 12:08.

However, come the final event of the night, UST would deepen the wound even further. From start to finish, the team of Eloiza Luzon, Michelle Loterte, Karen Janario, and Glaisa Salcedo commanded the race and finished with a clear win for the gold with 48.75 seconds. De La Salle University’s (DLSU) Mary Diesto, Judy Rendora, Melissa Escota, and Elrica Guro came in a far second from UST with 49.15 seconds to win silver. Settling for bronze after clocking 49.89 seconds were FEU’s Jinny Omena, Cristabeth Demillo, Mary Avila, and Rich Palmares.

Pole vaulting runs in the blood of the Obiena family, as the younger sister of the national record holder showed. UST’s Emily Obiena cleared 3.20 meters to win gold in the event. The celebration did not end there for the younger Obiena, as UST also managed to win both silver and bronze thanks to Richelle Abotalmo and heptathlete Sarah Dequinan respectively. Both vaulters cleared 3.10 meters behind Obiena. This massive day three performance gives UST a commanding lead coming into the last two days of the competition.

After UST’s consistent impressive performances so far, both UE and FEU had to step up a bit to set themselves up for the last two days. In the discus throw, it was UE’s Reah Sumalpong who threw 40.57 meters for gold to give UE a bit of an edge. FEU’s javelin throw champion Evalyn Palabrica settled for silver with 37.14 meters while DLSU’s Jewel Manaig nabbed brone with 36.77 meters.

Up next for the combined events was the women’s heptathlon with last year’s silver medalist Sarah Dequinan from UST and Jinny Omena from FEU.

UST’s Judy almasa and UP’s Mariane Yorac came out strong in the 100m hurdles. These two women were the only ones who clocked a sub-16 hurdle race, with Almasa clocking 15.69 seconds and Yorac clocking 15.75 seconds. Dequinan fell short of the sub-16 second club with 16.09 seconds.

Yorac continued the momentum going in the high jump by being one of two jumpers with the highest record. She jumped 1.62 meters to become the new event leader. Sharing her jump of 1.62 was FEU’s Jose Ligmayo. Dequinan only managed to clear 1.56 meters while Omena’s was 1.47 meters.

In a back-to-back fashion, Ligmayo won the shot put with a throw of 8.76 meters. Dequinan managed to pull through with a throw of 8.54 meters while Yorac failed to throw past 8.0 meters with 7.96 meters as her farthest. Omena trailed all three women with 7.89 meters.

In the final event of the day, UST’s sprint dominance managed to translate also for Dequinan in the heptathlon after sprinting the fastest 200m of the night with 26.19 seconds. Despite the fast race, she is still one place behind Yorac who goes home as our half-time event leader. Yorac goes home with 2538 points despite her subpar 200m which placed her at sixth while Dequinan goes home with 2353 points. Ligmayo hangs on to third overall despite placing last in the 200m with 2413 points.

Bulldogs defeat Maroons, move one win away from Finals incentive