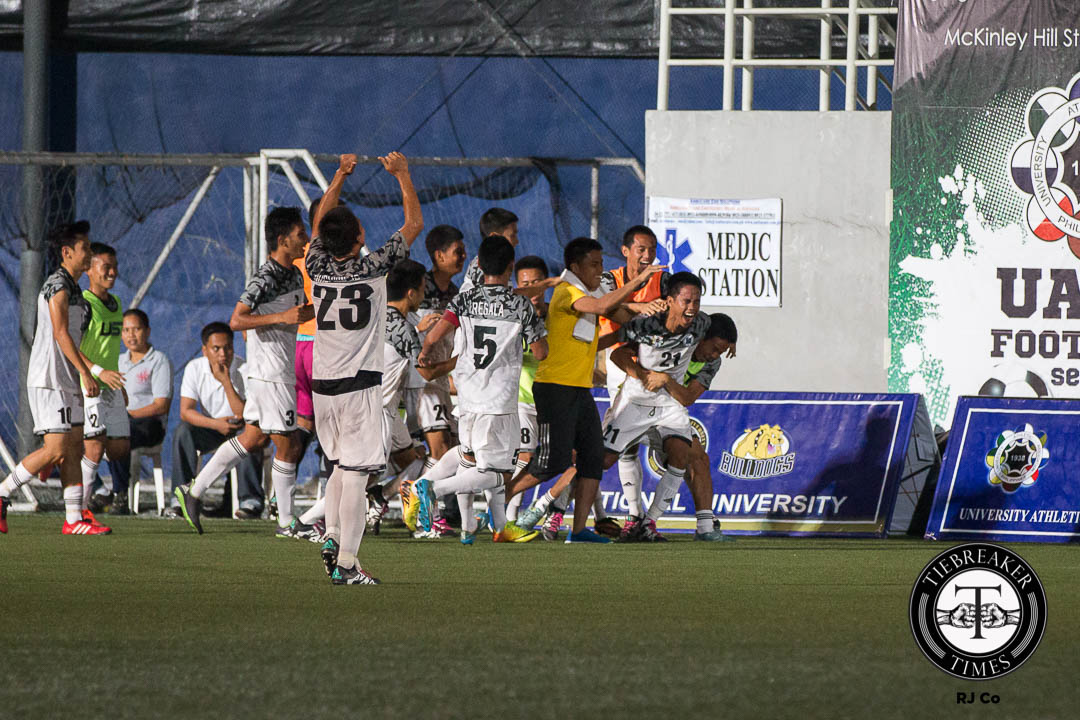 Just when it all seemed that it was only a matter of time before the Bulldogs trashed the Growling Tigers, Football played a funny joke.

The University of Santo Tomas Growling Tigers shocked the National University Bulldogs, 1-3, at the McKinley Hill Stadium in Taguig City.

UST goalkeeper Jose Abraham kept the Growling Tigers alive while goals from Ronald Batisla-Ong (52′) and Renz Gumban (72′ & 81′) delivered three valuable points to Espana. Darwin Regala gave NU a goal late into stoppage time. Who knows? The Growling Tigers’ win might simply be a warning sign towards the other teams in this UAAP Season 78 Men’s Football Tournament.

The Bulldogs were simply the top team in the first half. They very much dominated the Growling Tigers in the first twenty minutes of the game. Before the match even aged a minute, Paolo Salenga was immediately through on goal but UST goalkeeper Abraham prevented an instant goal.

A minor scuffle broke out between the Bulldogs and the Growling Tigers in the first half but, thankfully, it didn’t amount to anything more than that. Salenga then took a free kick but the UST wall was sturdy. Minutes later, Francis Abalunan had a header saved by Abraham.

Salenga proved that he wasn’t only a scorer but a creator as well. He not only penetrated the UST defense but also looked for gaping holes in their backline. At one instance his pass resulted to a Nico Macapal attempt which hit the Growling Tigers’ crossbar. Another NU attack unfolded but Abraham was alert to keep the match goalless.

The Growling Tigers had to rely on set-pieces to unsettle the Bulldogs’ defense. They had a free kick but NU goalkeeper Chris Perocho easily caught it. NU then resumed their bombardment of the UST goal via Francis Abalunan who forced a great save from Abraham.

UST rookie AJ Pasion is one of the main outlets of attack for the Growling Tigers and his shot from outside the box was caught by Perocho. Jopridale Molino then tried his luck but Perocho was on hand to stop him. After those UST attempts, it was all NU again. Macapal won a free kick upon which the referee signaled for an infraction when the ball was kicked.

The Bulldogs were unlucky not to score before halftime while UST were glad to just scrape through. It remained goalless at the half.

However, Football punishes teams who don’t take their chances. The Growling Tigers shocked the Bulldogs at the 52nd minute when a set-piece resulted into a tap-in by Batisla-Ong. The UST camp celebrated wildly as if they couldn’t believe their luck. NU tried to respond immediately but Abraham was on hand to deny them multiple times.

Abraham continued doing what he did best when he saved a goal-bound header from the Bulldogs. At the other end, Perocho was able to thwart the UST attackers easily whenever the Growling Tigers successfully penetrated the NU defense.

The goal gave the Growling Tigers the initiative to control the match while the Bulldogs became more tentative in attack. Nevertheless, the Growling Tigers pushed on looking for a safety net and they finally got one at the 72nd minute when Gumban slotted the ball in the NU net.

Nine minutes later, Gumban again raced through the NU goal and calmly finished against Perocho at the 81st minute. Regala gave NU a consolation goal late into stoppage time but the match was well and truly over.

With the win, UST are now second place on 8 points while NU go a place down at 7 points. Next up for the Growling Tigers will be the FEU Tamaraws at the McKinley Stadium in Taguig on Saturday (February 27, 2016; 4:00PM) while the Bulldogs will face the Ateneo Blue Eagles a day later at the same venue but at 1:00PM.

PBA Pass-Through: Chism still an option; Al-Hussaini out for at least two weeks