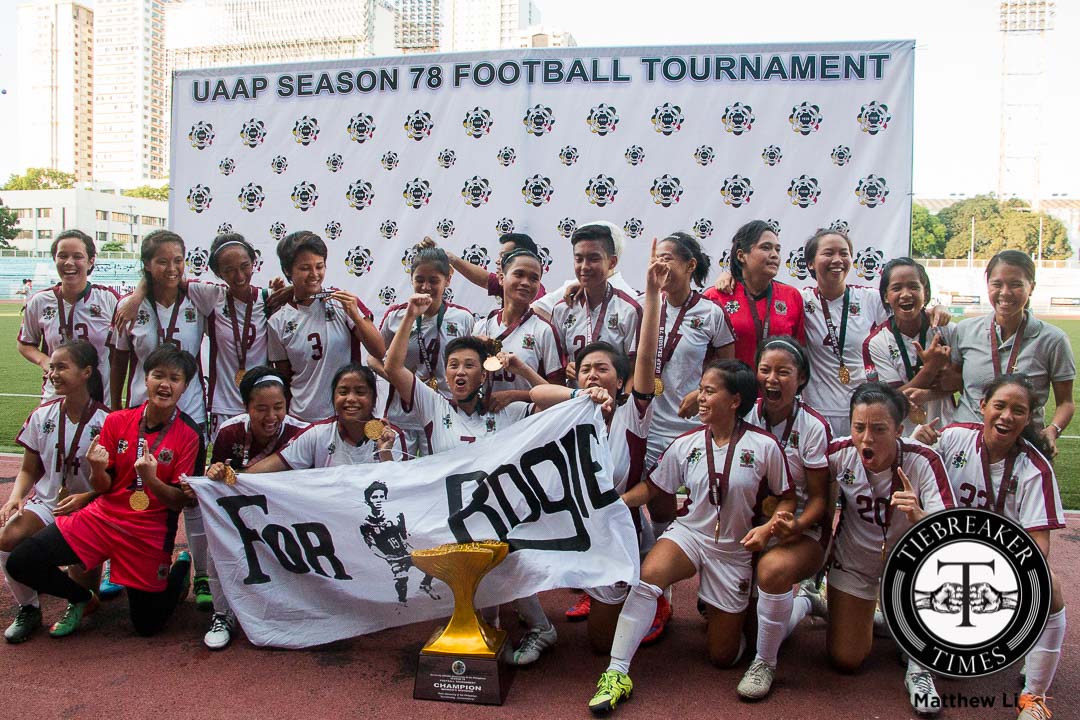 A BG Sta. Clara 67th minute header settled a nervy finals encounter between the De La Salle University Lady Archers and the University of the Philippines Lady Maroons, who went on to be crowned as the champions of the UAAP women’s football tournament for the very first time, after winning the game held at the Rizal Memorial Stadium with the score of 2-1.

In a game of two halves, it was actually the Lady Archers who began the game on the front foot. They bombarded the UP defense with a series of attacks, the first of which took place in the fifth minute. Shannon Arthur dared to dink her shot over UP goalkeeper AJ Javier. Although Arthur off her line, Javier recovered well enough to keep the effort out for a corner. The following set piece was wasted, but La Salle immediately recycled possession and threatened to open the scoring again. Kyla Inquig robbed Molly Manalansan of possession before swinging a pass towards the unmarked Chelo Hodges. Last year’s rookie of the year awardee took her time, but the attempt wasn’t good enough to beat the well-positioned UP goalkeeper.

Seizing momentum, La Salle pushed UP to defend in numbers. Aware of DLSU’s several attacking threats, the Lady Maroons stationed six to seven outfield players to clog La Salle’s passing lanes. It proved rather unsuccessful as their defense was breached time and time again, but they had Javier and La Salle’s poor finishing to thank. Case in point: in the 16th minute, when Inquig shrugged off three UP defenders only to hit it straight to Javier. The UP goalkeeper also came to the rescue when she charged down on an unmarked Sara Castañeda just inside the box seven minutes before the break. The score stayed level, much to the relief of UP Head Coach Anto Gonzales and his team.

#ReadMore  Black preps Meralco for Pringle: 'Probably the best player in the league'

“We felt na this is going to be a long day. Except for the first 15 minutes when we moved the ball well, the rest was controlled by La Salle. We were just content on defending and that’s not how you play football,” the UP tactician remarked. Fortunately for his team, the tide turned around early in the second half.

Cristina delos Reyes provided the spark, as she started the second half with a meek attempt going harmlessly towards Inna Palacios in the 46th minute. It may have not changed the score but it channelled belief and confidence to the UP team. Four minutes after Delos Reyes’ half-chance, UP had the ball in a dangerous area once again. Delos Reyes released Sta. Clara with a delicate through ball into the box. Once in there, Sta. Clara fell on the ground, prompting a penalty decision from Ritaga. Metillo appeared to have brought the UP winger down in the area. Given the chance to put her team ahead, Delos Reyes made the chance count, as her spot kick had too much power for Palacios to smother.

The lead did not last long as La Salle also earned a penalty 10 minutes later. Aira Agustin was adjudged to have handled the ball inside the box, giving DLSU the opportunity to restore parity in the match. Up stepped Castañeda, who coolly slotted home the penalty by sending Javier the wrong way. It built up a tense closing period wherein the next team that would find the back of the net could well go on to win the title.

In the 66th minute, Mary Rose Obra threatened to swing the advantage back to the Lady Maroons. The third year striker’s shot was only just palmed away by Palacios. The resulting corner eventually paid dividends, as Sta. Clara nodded in the delivery, sneaking past the unsuspecting La Salle defense. As they did in the first half, UP hung on to secure their maiden championship title in the UAAP.

“The girls responded well from the break. The seniors really stepped up. It was a hard battle. We were resilient,” Gonzales said after the match. Reminded that the team has won its first ever women’s championship, the UP coach opted to talk about what he desired for the team. “I’m not really a big fan of history. What I’m after is for the girls to show what they’re capable of. Perform at their best and they showed [that] in the second half,” he commented.

It has not been all rainbows and butterflies for the Lady Maroons this season, but their latest achievement just goes to show that it only takes anyone to give their best to become the very best.