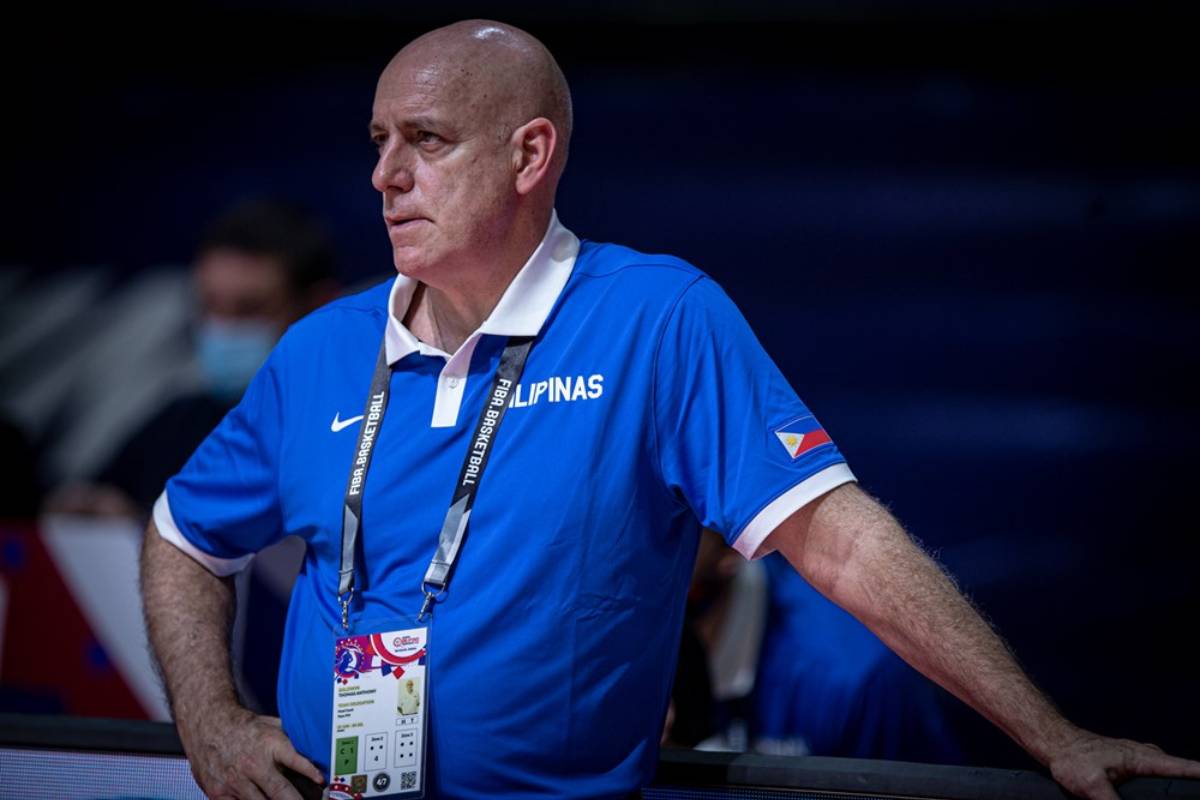 After seven months, Tab Baldwin finally broke his silence on his firing as both Gilas head coach and program director.

And the American-Kiwi tactician decided to do so as he wanted to quell the rift happening between the majority of basketball fans and the Samahang Basketbol ng Pilipinas.

“You know, I would say strained over the last six months,” he said when asked by Philippine Sports Commission chairman Noli Eala about how his relationship has been with the federation over the past few months. “But I think the whole point of me speaking out on this is that there has to be a coming together. If the fans were not interested in me, there wouldn’t be of need for me to speak but they seemingly have been, and I wanna do my part to help for the World Cup.

“I’m not antagonistic to the SBP, I have kinda left them alone to do their job, and they’ve left me alone to do my job. But, I think because of the anger that’s out there, in social media in particular, I think, we all need to take steps to try and heal our basketball landscape,” he continued.

“I don’t think, I’m the main cog in that wheel, but I think there’s a part that I should play, and so I wanna play that part. There’s no reason for me to be offside with the SBP or the personalities there, and there’s no reason for them to be offside with me. So, you know, let’s put it back together, and acknowledge the fact that we all want to succeed and we want the Gilas basketball program to work.” 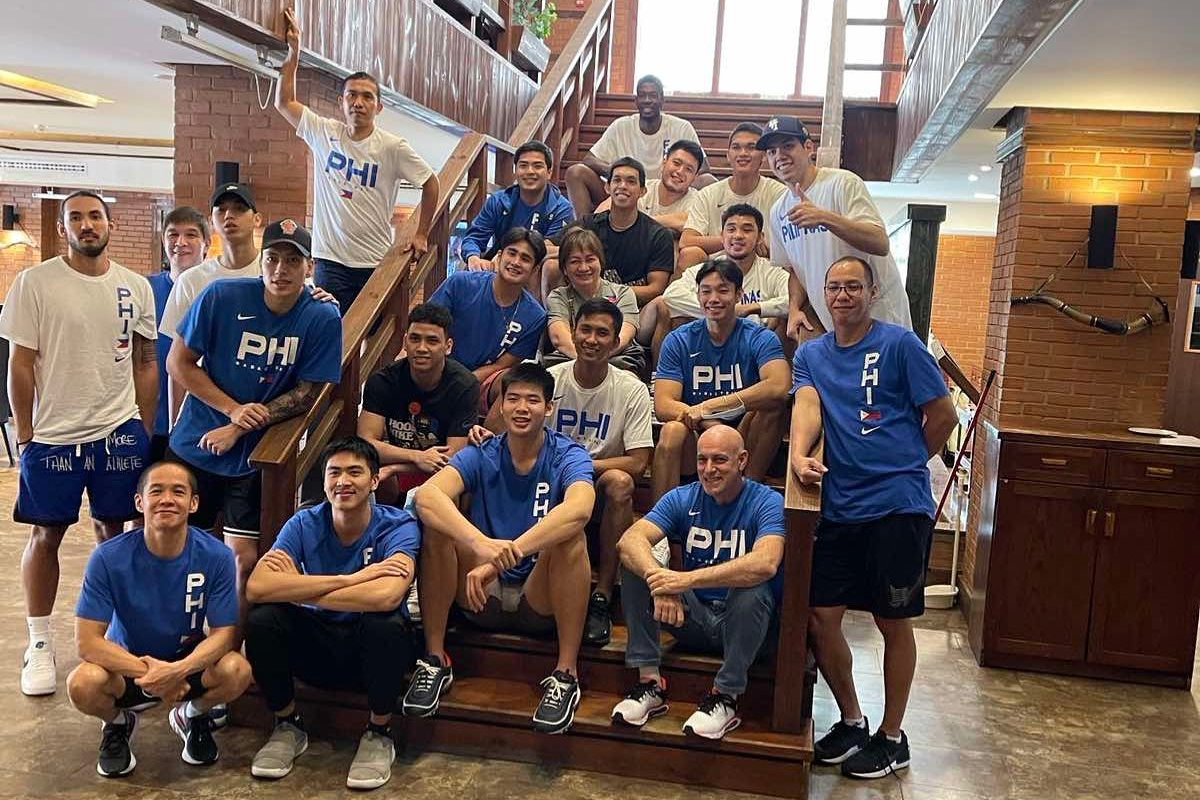 Coming off the King Abdullah Cup in Jordan, Gilas were left idle after FIBA decided to postpone the first window of the World Cup Qualifiers.

Baldwin had wanted a US training camp for Gilas to close out th year but with the resumption of the Qualifiers still not defined, his proposal did not see the day of light.

Instead, Baldwin decided to head to the US alone to tend to his sick brother while also looking for potential recruits for Gilas Youth.

Once he came back though, Baldwin had to do some shuffling.

The UAAP declared that it was pushing through with Season 84 on March while FIBA announced that the windows will re-open in February.

Admittedly, it caught him by surprise.

“I didn’t know that player availability would always be as tough as it is going to be coming into that window, and I don’t think that I carefully planned my own conflict of interests between Ateneo and Gilas.

“I knew that it would exist, but you have to remember, we were coming out of the pandemic, and sure around the UAAP season didn’t exist. We didn’t know way back in 2021 that there was going to be a Season 84,” he recalled.

With UAAP teams training in a bubble, the availability of Justine Baltazar, Carl Tamayo, and RJ Abarrientos was not possible. Meanwhile, the PBA Governors’ Cup was still ongoing as well.

Another problem would arise as the 2019 Gilas draftees, namely Isaac Go, the Nieto twins, Rey Suerte, and Allyn Bulanadi, were expiring on January 31. And it was only during the last week of January when talks of a renewal started.

It proved to be too late as the quintet were firmly decided to go to the PBA teams that drafted them.

Baldwin made the assumption that the Gilas team for the February window will be composed of PBA players from the MVP Group, sprinkled with the pool left and some B.League imports.

And there was only one man suited to coach the PBA-laden team in Baldwin’s mind — TNT head coach Chot Reyes.

“And, then, when it became a reality that most of the players that would be available would be coming from the PBA, and would be coming primarily from the MVP Group of PBA teams, it just made sense to me, and that’s why I had the discussion;and the meeting with MVP (Manny V. Pangilinan) – and I suggested that to him — which was not his suggestion, this was mine — and, it was simply my solution to a sticky situation — let Chot coach. So that’s how the meeting ended.”

What Baldwin forgot was besides being the program director, the SBP announced on live televesion after the Olympic Qualifying Tournament-Belgrade that he was the full-time head coach of Gilas. The practice of having a revolving head coach should no longer happen in the eyes of the SBP.

What came next was something no one expected. 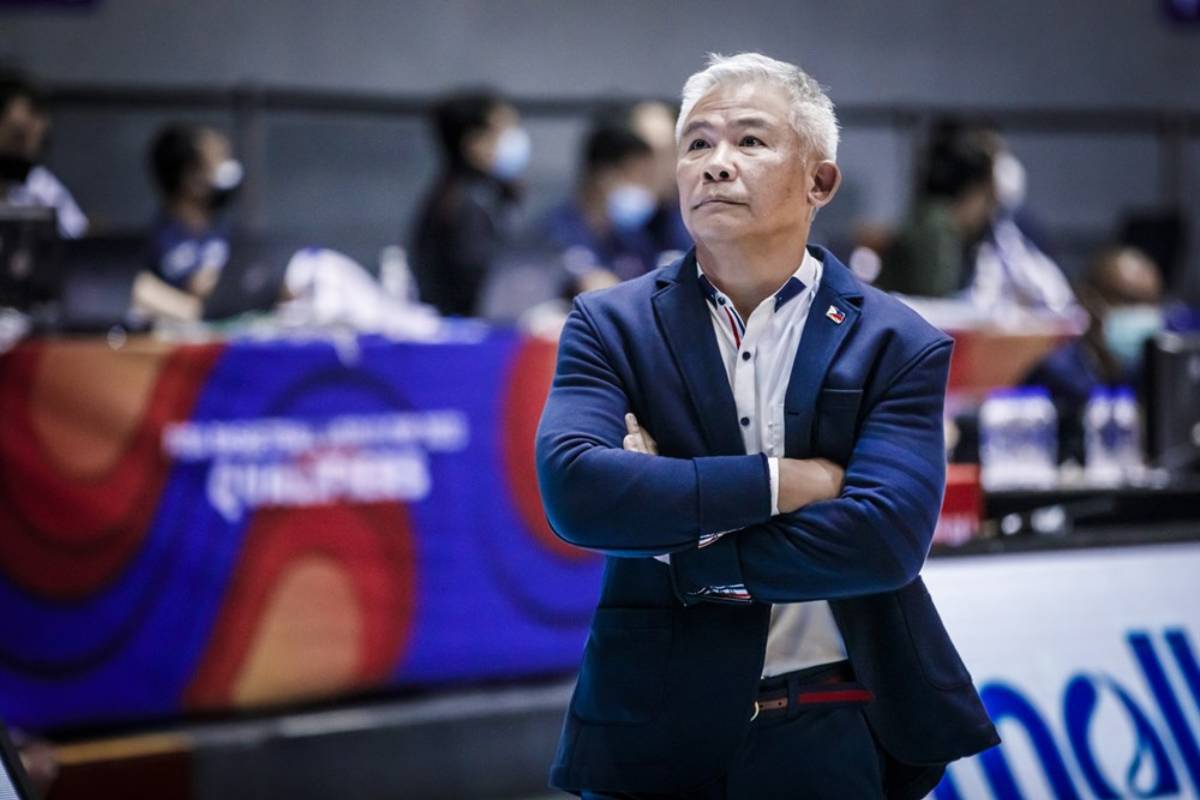 Days after his meeting with MVP ended, the business tycoon met with his trusted confidants SBP president Al Panlilio and PBA chairman Ricky Vargas to talk about Baldwin’s proposal.

Baldwin was said to have been invited to that online meeting that happened on January 28 but could not attend.

One thing led to another according to Chot Reyes’ account.

On the 29th, Pangilinan offered him the post to be full-time Gilas head coach. He consulted his family the day after and he accepted the job on the eve of Chinese New Year.

In a press release from the SBP, it stated that Baldwin “stepped down” as he wanted to focus on Ateneo. But Baldwin shared that he wanted to stay on as program director.

“I understood that they wouldn’t want to chop and change coaching positions, which has been my stance. They wanted stability.”

It was not just the head coach title that was removed from Baldwin but also the program directorship of the program.

And Baldwin has come to understand that it had to happen.

“In terms of the program director, they just didn’t see that it made a lot of sense to have a coach like Chot, who is very capable of running the program. He has done it in the past to have somebody like me seating above him, making decisions that he would have to, obviously, go out and implement. They thought that Chot was capable of doing that for the sake of stability in the program, that was their decision. And, so yes, I accepted that, and I decided to move forward,” he continued.

“I still work for MVP as the coach of Ateneo, and I also work for Ateneo University of course, and that was my job. I mean, I was raised by my father to keep my mouth shut and do my job, and so that’s what I did. And, you know, that’s what kind of brought us here.” 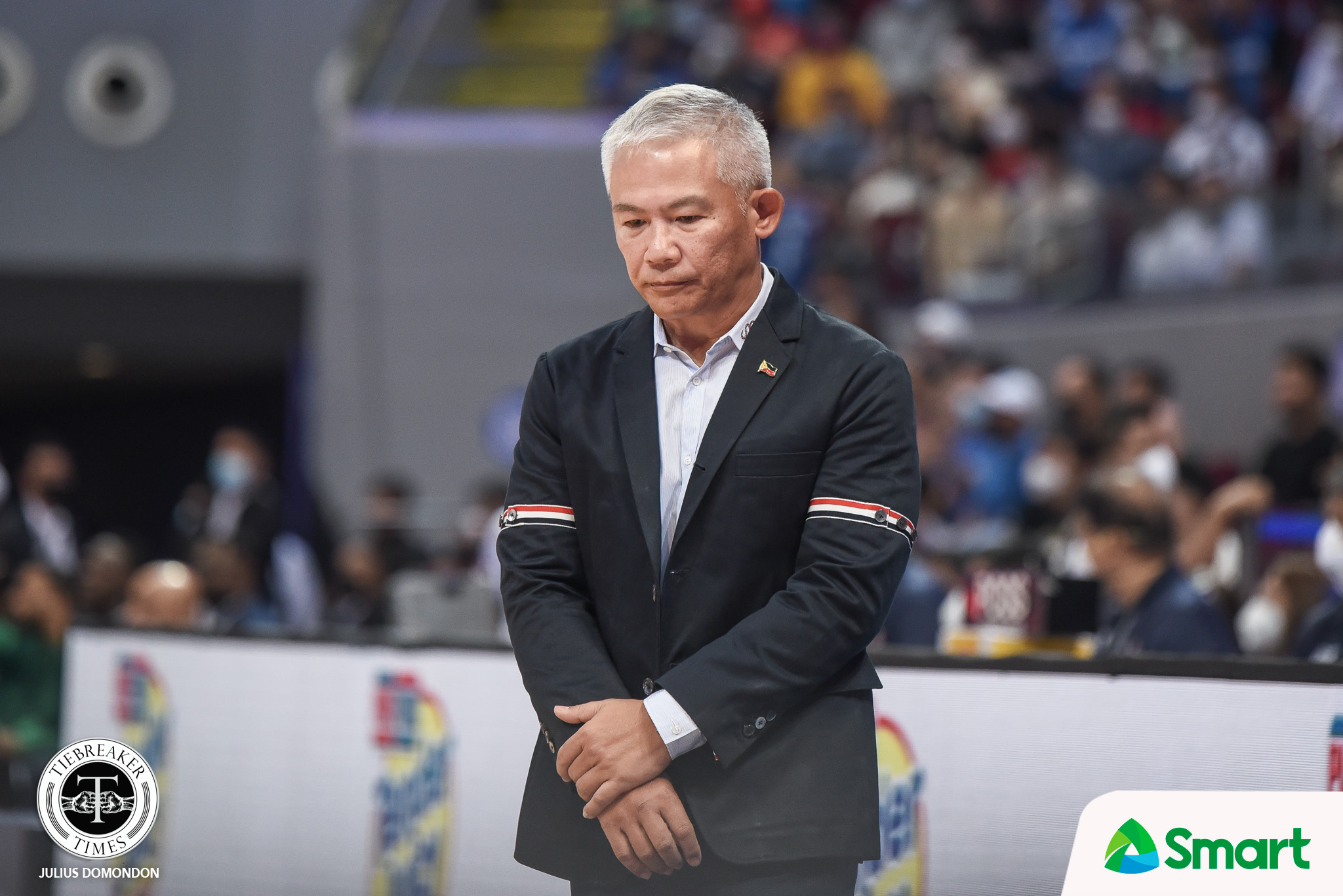 It’s been seven months since Reyes has restarted the Gilas program from scratch.

And in those seven months, wins were hard to come by.

Under Reyes, Gilas’ wins have come from low-ranking teams like India, Saudi Arabia, and Southeast Asian nations. The Philippines suffered losses at the hands of New Zealand, Japan, Lebanon, and, most painful of all, Indonesia.

As the losses came, the fans started to turn as they were induldged by triumphs from Baldwin’s Gilas.

Baldwin though clarrified that he had a fault as well.

#ReadMore  Kai Sotto on Adelaide: 'I'm very happy to be where I am'

If he had just talked to Pangilinan earlier, Reyes would have had a longer time to formulate a battleplan for the February window. Had he laid out a concrete plan, the transition would have been seemless.

“I don’t think that my departure from the program in any particular way has brought the program down but I think the timing of the meeting as I’ve said with MVP was not good for the February window.

“I think I could have done that sooner, but I don’t know how much sooner because having to weigh up all the factors that were in play heading into that window, you know, I kinda just weigh it all those up, and I made a decision when I got back from the States that this would be the best course for the program, thinking only that I was only looking at the February window but, I wasn’t looking at the next year and a half,” he admitted.

“So, the moment and time that happened, and the impact from that moment – yeah, it’s been hard on the program, but I didn’t foresee that the decision I made would cause these problems. I knew the February window would be tough whoever coached it, but I was just in a conflicting situation where I was contracted to be the Ateneo coach, and I was not contracted to be the Gilas coach,” he lamented. 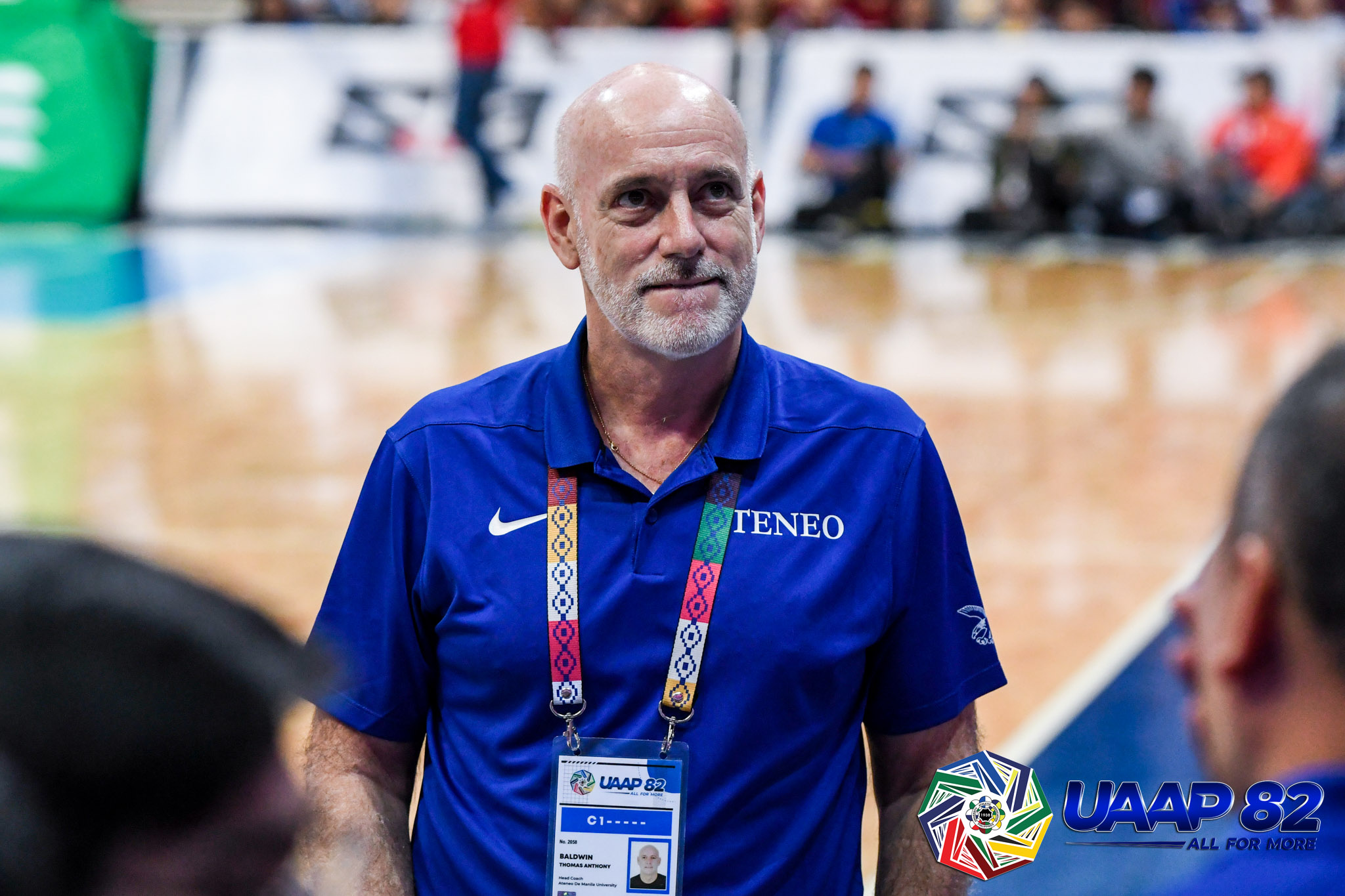 Last Friday, Baldwin received a message from SBP president Panlilio. Though the content of the message was not dilvulged, it seems like all the parties are ready to move forward.

“I received a text message, I’m very grateful for it from Boss Al last night. So, obviously, I don’t want to call it the healing process; but obviously the process of communication is underway.”

It does not mean though that he is set for a Gilas return. After all, it’s not his decision to make — it’s Reyes’s.

“Will my inclusion be a positive for the program and the team? That is a complex question; and a complex answer. And, I don’t think any of us should just think of that, and look at it very simply as, ‘Would Coach Tab’s coaching knowledge and experience be a benefit to the team?’ It’s much, much more than that. So, I don’t wanna impose any pressure on Chot,” he said.

“But from my position, if I can help, and I’m trying to help now and if this is the sum total of the help that I can give, it’s fine. But, if it does help, great! So you know I wanna leave it at that.”

And if he will not be called up for Gilas duties come the World Cup, he will still do his part — cheer with the thousands in support of the national team.

“I think we all need to commit to be the greatest sixth man in the history of the sport. I wanna be part of that sixth man as well.”