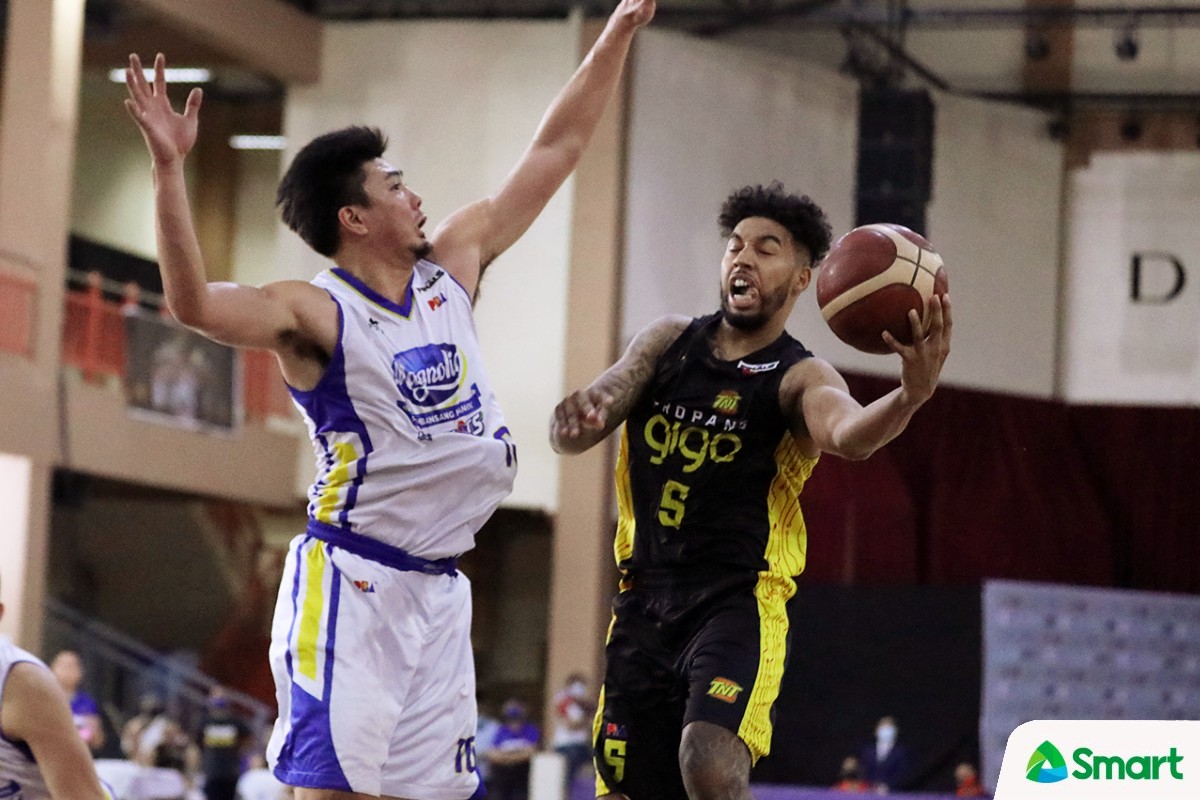 TNT hit a barrage of three-pointers early to bury Magnolia, 105-93, for a favorable 2-0 advantage in the 2021 PBA Philippine Cup Finals, Friday evening at the Don Honorio Ventura University Gym in Bacolor, Pampanga.

The Tropang Giga followed up their dominant series opener victory a couple of nights ago with a character-testing win thanks primarily to their hot shooting, which also led to a record-setting night for the storied franchise.

They shot an impressive 10 of 15 triples in the first quarter alone for a 40-27 lead. Their 40 points, according to league stats chief Fidel Mangonon III, are the most points for an opening period in the Finals in a decade.

That was since TNT had the same number in the first match of the 2011 Governors’ Cup Finals versus Petron Blaze. It still lost, however, 88-89.

And those 66 points are the most for a first half in the Finals, since Barangay Ginebra’s 67 in Game Four of the 2018 Commissioner’s Cup Finals versus the Beermen which the crowd darlings won, 130-100.

“We always say in our offense [that] the ball has energy, so if they’re willing to share it and move then we just find the open men. That’s what led to the hot shooting in the first half,” offered head coach Chot Reyes.

The triumph, however, did not come easy for the MVP Group’s crown jewel as it had to buck a hijack attempt by the Hotshots.

After trailing by as many as 21 points in the first half, Chito Victolero’s wards stormed back and knocked to within four, 86-90, following Ian Sangalang’s bucket off a Calvin Abueva drop pass with 7:39 to go in the final chapter.

But Mikey Williams hit an open three-pointer as a response and then scored off a lay-up just moments after Brian Heruela’s basket for a quick 7-0 run to re-establish their lead to double digits, 97-86, with 6:13 remaining.

Jayson Castro then stepped in, scoring four straight off a jumper and a pair of free throws to widen the lead to 15, 104-89, with less than two minutes left.

“Our whole focus today was to be better than we were in Game One. I think we were able to do it in the first half but in the second half, it left a lot to be desired. So we need to go back and take a look,” said Reyes.

Williams led TNT with 28 points on five threes to set the most points by a rookie in the Finals since Maverick Ahanmisi made 30 in Game Four of the 2016 Commissioner’s Cup title series between Rain or Shine and Alaska.

The 29-year-old combo guard also collected nine rebounds, six assists, and a steal in 41 minutes and 47 seconds of action.

“This is my first finals appearance. I came in just not knowing what to expect but just relying on what the coaches are saying and my teammates are doing and just following in their lead,” said Williams.

The Tropang Giga finished with 17 triples, the third all-time most in the Finals. They shot 46-percent from the floor, all in all.

“Execution and selflessness, the willingness of our players to make the extra pass and find the open guy,” said the champion coach.

TNT fielded in a complete lineup as it had Kelly Williams, who played through the back injury he got in Game One last Wednesday. He made three points, five rebounds, and an assist in nearly 23 minutes.

“Just having him in there, that’s a huge presence, a big factor for us,” said Reyes. “Every minute that he can contribute is golden minutes for Poy [Erram], Troy, and the other bigs to get some rest.”

The same goes for Magnolia, who had the services of Sangalang even after suffering a back injury also in the previous game.

“They have their injuries, we have our injuries, so in the end, if it’s the Finals you just come out and play your best — injured or not,” Reyes said.

Paul Lee had 12 points. Abueva and Mark Barroca added 11 each in the loss that saw them saddled with fouls — the former, who also hauled down 11 caroms, got disqualified for incurring his sixth foul with 5:21 left to play.

The crucial Game Three of the best-of-seven series is on Sunday, October 24, at 4:35 p.m., with TNT looking to move a win away from the crown.