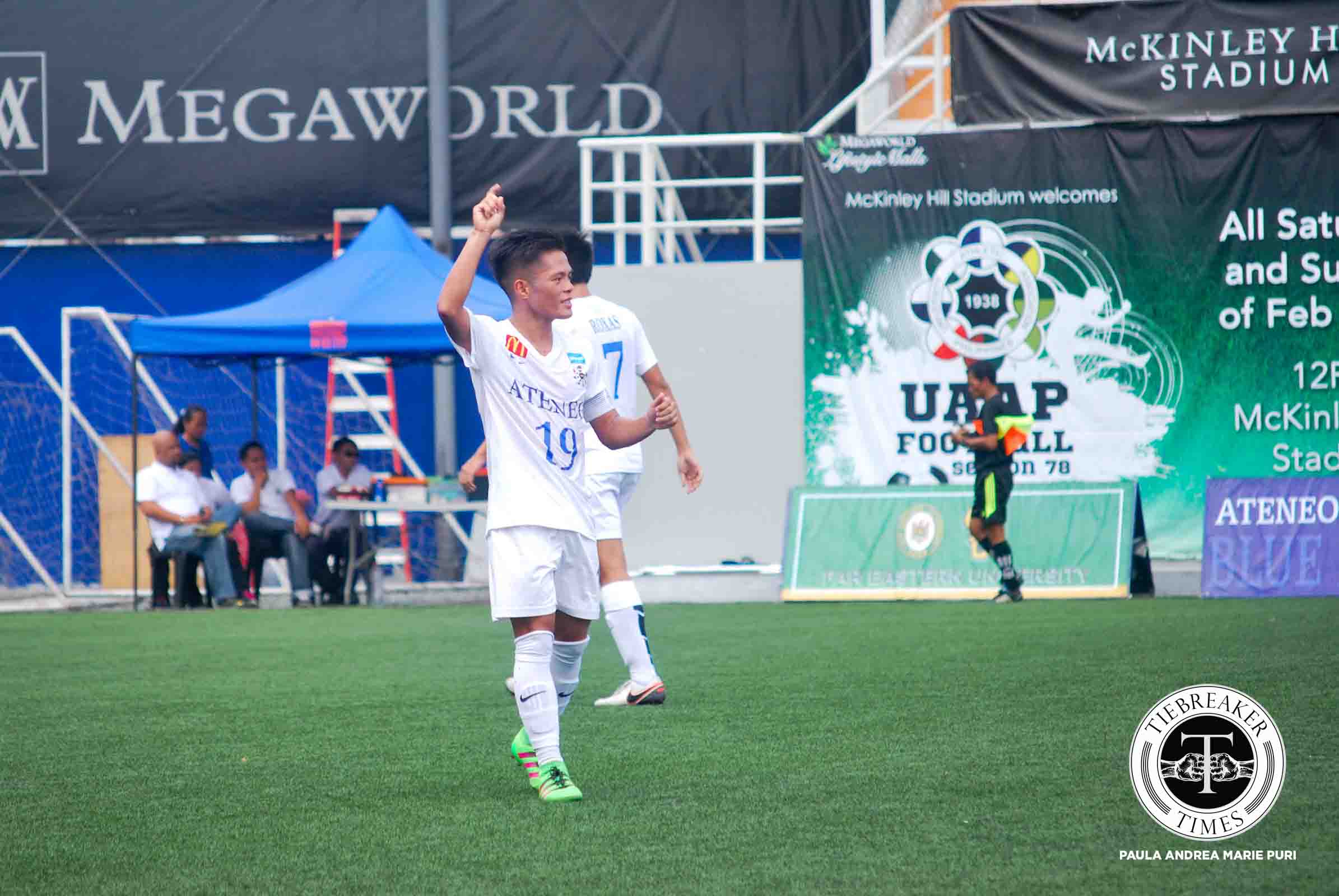 Crucial to that win was Ateneo captain Mikko Mabanag who provided the assist for Carlo Liay’s 36th minute goal to open the scoring. Mabanag then continued to create for his teammates from his position in midfield via his passes and set-piece delivery

“This game was amazing because the players were being sport. Both teams parang we were just playing Football and that was the beauty of it. We were letting the crowd do all the jeering but kami kalma lang sa loob, laro lang and that was the main job inside. Just keep playing our game and win. You know, nanalo kami yun yung best part about it”, Mabanag said after the game.

The Blue Eagles’ reward for their Final Four victory is a Finals date with the University of the Philippines Fighting Maroons this Thursday (May 5, 2016; 5:30PM) at the Rizal Memorial. The last time both teams competed in a game of this magnitude was in the Season 75 Finals where Ateneo won the best-of-three series courtesy of penalty shootouts in the two games. Aside from Liay, Mabanag is the only remaining member of that team and he knows all about the history. “Battle of CP Garcia na siya hindi Battle of Katipunan”, he joked,

Mabanag admitted that Ateneo’s head-to-head record against UP this Season 78 was dismal, but he promised a different Blue Eagles side in the Finals. He expounded, “The mentality will change. The game will change kasi it’s all or nothing. It’s not like you can play safe anymore. We’re gonna prepare for it. It’s not gonna be an overnight thing. We’re gonna do it this entire week and hopefully we showcase another great game. Like what (La Salle) coach Hans-Peter Smit said, UAAP Football is on that up and that what we’re here for to showcase what football is and hopefully champion kami.”

On a personal note, that Finals will be Mabanag’s last ever game for Ateneo. He’s been a player for Ateneo ever since elementary, yet brushed aside the sentimentality attached to the game. He shared, “What I think is how to make lasting memories and that’s my purpose for the next game. How to make lasting memories and how to do that is to prepare well and win the championship. We have to prove it as a team na sana talaga manalo kami.”

As mentioned earlier, Mabanag and Liay are the only players who were part of that Season 75 championship. Mabanag hoped that both of them can help ease the condition their teammates’ minds by sharing how that team clinched the championship. Mabanag said, “You know the past is part and you have to focus on the present. Maybe our story about that championship will ease off the pressure and maybe lahat kami mag-function. Kasi diba sabi nga nila maingay yung game and yung role ng each player is kailangan nilang gawin yung kailangang gawin nila sa field. Kung gawin nila yung role individually then we will work as a team this Thursday.”

Season 78 has been a dramatic campaign for Ateneo. UP will enter the game as favorites, but anything can happen in a cup final. No doubt Mabanag will be urging his teammates on with that strong persona of his. Who knows? Maybe one of the most colorful characters to ever grace UAAP Football will provide that moment of magic to secure the championship.