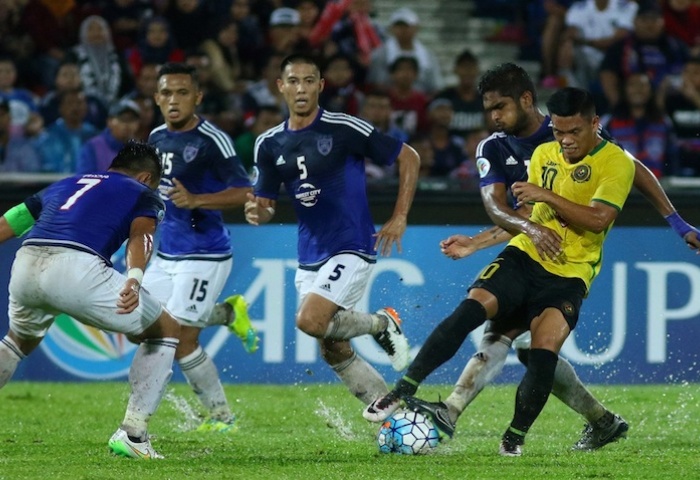 There are times when teams were just simply outplayed. Those teams had nothing to be ashamed of as the opposition was just a level above. Sometimes those losses happen for people to realize just how far a team has gone and what more needs to be done in order to compete at a higher level.

It hasn’t been the best week for Philippine football as its two teams which participated in the 2016 AFC Cup have been eliminated. Ceres-La Salle Football Club got out in the cruelest of ways while tonight (May 25, 2016), Kaya FC were simply outclassed by Malaysian side and defending AFC Cup champions Johor Darul Ta’zim FC 2-7 at the Larkin Stadium in Johor.

Perhaps as expected, Kaya stared the game defensively with the hope of springing an attack on the counter. Unfortunately for them, the game wasn’t played in the best of conditions as the rain made the pitch soggy. While the away side sat back, JDT smelled blood and played with so much confidence on the ball.

True enough, the floodgates were opened early. There were warning signs in the opening minutes as midfielder Alfred Osei had to clear the ball to prevent a dream start for JDT. The defending champions, though, weren’t to be denied. Kaya captain Aly Borromeo conceded a foul at a dangerous position outside his team’s box and the free kick was then converted by Lucero at the 14th minute.

That was just the first blow in what became a long night for Kaya. JDT were determined to put up a show for their home crowd and it felt like a simple matter of how much there were going to score throughout the game. One particular play saw Osei clumsily foul Diaz in the Kaya penalty box. The referee had no choice but to ward a penalty which Diaz himself converted at the 22nd minute. Those first two goals were brought about by uncharacteristic errors from Borromeo and Osei. JDT were just too strong for Kaya.

Down by two goals, Kaya had no option but to attack. JDT goalkeeper Izham Tarmizi, though, was untested and one routine catch allowed him to instantly kickstart a counterattack. Kaya were too focused on getting one back that they opened up too much space for JDT to penetrate. Some neat work from the wide areas allowed a quality ball to enter the Kaya box and the defenders were helpless against Azamuddin who then tapped the ball home at the 33rd minute.

Six minutes later, Azamuddin got his second of the evening. He breezed past Kaya’s right sided defense and unleashed a powerful shot as soon as he got inside the box at the 39th minute mark. Kaya goalie Matthew Acton was blameless for that goal as it was simply a wonderful strike. Halftime came at a good time for Kaya as they took with them a 4-0 deficit at the break.

As they had nothing to lose with the game virtually over, Kaya were noticeably more adventurous once the match restarted. They pressed for the ball and defended from the front. That oressure allowed them to carve out an attempt as Porteria forced Tarmizi into making a routine save. Moments later, Joven Bedic has a shot which hit the crossbar. The ball somehow found its way to Porteria who then eluded his marker to pull one back for Kaya at the 53rd minute.

Any hope for a potential miracle, however, was instantly extinguished by JDT. Kaya failed to set themselves up defensively and this allowed Lucero to restore the four-goal lead at the 54th minute. The next two goals conceded by Kaya at the 69th and 70th minutes were further examples of their defense being as good as manhandled already. JDT substitute Jasuli easily took two touches in Kaya’s box in order to score while Lucero bulldozed his way a minute later to clinch his hattrick.

Two minutes from time, Kaya produced the magic they arguably needed to conjure earlier in the game. Some slick passing allowed Porteria to play Urgate through and the latter made no mistake at the 88th minute to get another consolation goal from Kaya.

After three added minutes, JDT were worthy 7-2 winners against Kaya and the former marches on in the AFC Cup. For Kaya, all they need to do is to keep their heads up. It was a painful exit, although how they got that far was an achievement in itself. It’s now up to them to return and find a way to go at least one stage further. That isn’t impossible with how determined everyone connected to Kaya is to see more successful days. Now, though, it was all about licking their wounds, recovering and going back to the drawing board.