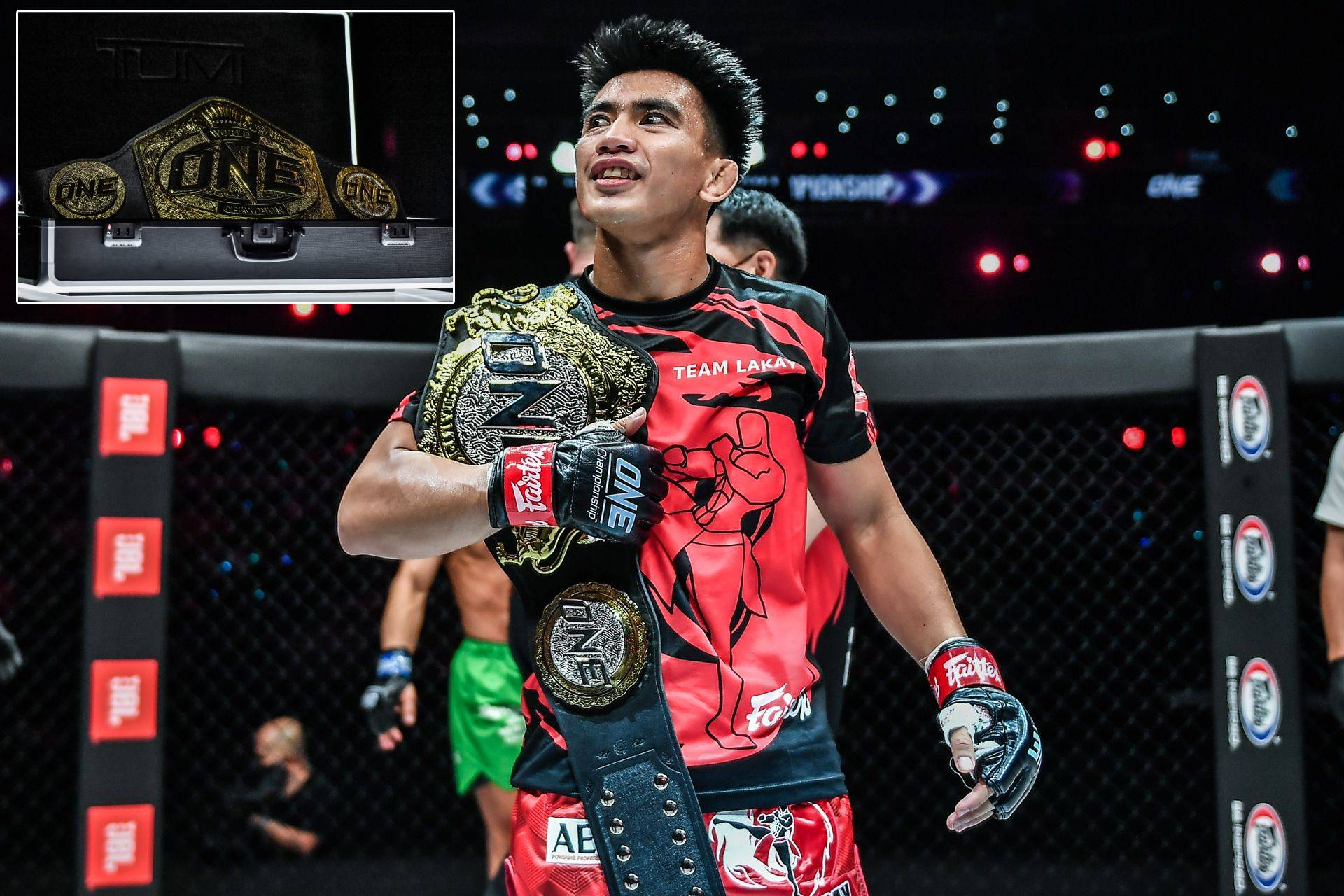 Joshua Pacio will be making his fourth world title defense in his second reign as the undisputed ONE strawweight champion on Saturday, December 3rd in the main event of ONE 164 against American challenger Jarred Brooks.

If he walks away with the victory this weekend, Pacio will be bringing the intricately-crafted hardware back home to Baguio City, Benguet.

Ever since its tenth-anniversary spectacle titled “ONE X” this past March, ONE Championship has been awarding a world title with an updated look.

Weighing over 26.4 pounds, the new title design looks very similar to its silver-plated ONE World Grand Prix counterpart but overlaid with gold.

Three golden plates are mounted by hand on a thick natural black leather strap with the words “world champion” etched around the ONE logo in the center, and it is complemented by a crown motif at the top with seven red jewels that represent the promotion’s martial arts core values of integrity, humility, honor, respect, courage, discipline, and compassion.

Meanwhile, the two secondary plates add eminent value to the handmade masterpiece as it is studded with 42 white gems on each side.

“The belt is not only a stunning piece of art, but it’s a labor of love and design, and ultimately it’s reserved for only the best of the best in the world,” company chairman and CEO Chatri Sityodtong stated at the time.

“We are retiring our old belt after ten years. This is the heaviest belt on the entire planet, of any organization.”

The 26-year-old titleholder was in awe when he saw the belt for the very first time during a promotional activity at Shangri-La Plaza in Mandaluyong, Metro Manila on Monday, November 28.

“I just saw the belt in person, and I marveled at its beauty. Honestly, it made me feel more excited for my fight this Saturday,” Pacio told Tiebreaker Times.

“I am looking forward to winning the belt with the new design and putting it in our trophy room. Surely, it will be an added motivation for me and my team heading into my title defense this weekend.”

Although Pacio admittedly prefers the features of the old design, the Team Lakay standout understands the significance of the brand-new strap.

“The truth is I like the previous design better, but the current one also has its distinct features. The way I see it is that winning this particular belt means I have fought along with the next generation of ONE athletes. The older belt shows the experience of those who’ve fought under ONE for years,” he said.

Moreover, Pacio suggests that the powers-that-be should consider creating a more distinct title design for each combat sport in order to differentiate them from one another.

Since 2018, ONE Championship has been promoting matches from other disciplines of martial arts, such as Muay Thai, kickboxing and submission grappling, aside from its flagship sport of MMA.

“Probably, my wish would be that the MMA championship belt should have its own signature features that differ from the Muay Thai, kickboxing, and submission grappling ones. That would be awesome,” Pacio stressed.

A few days from now, Pacio will step inside the cage opposite perhaps the most difficult opponent he has to face in his professional career.

#ReadMore  ONE, TUMI set to launch luxury esports bag on ‘The Apprentice’

However, “The Passion” is no stranger to defying the odds.

As the countdown gets closer to fight night, the Filipino MMA phenom gains more confidence and belief that he can ace the test with flying colors.

“People can count me out all they want, but they can never doubt my strength and my heart as a champion,” Pacio declared.

In this article:Chatri Sityodtong, Joshua Pacio, ONE 164, Team Lakay