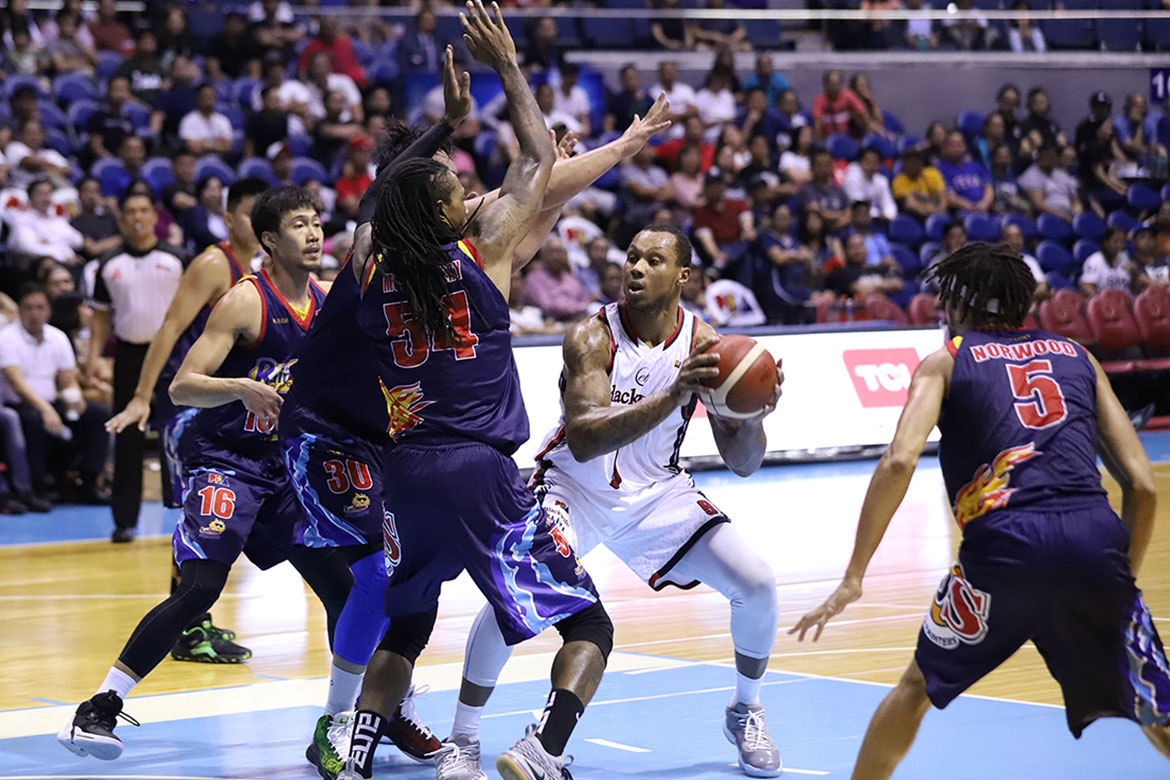 Greg Smith himself was well aware of how badly he shot the ball from the field in the Blackwater Elite’s 2019 PBA Commissioner’s Cup quarterfinal opener versus Rain or Shine last Saturday.

And he vowed that it will never happen again.

Three nights later, in Game Two of the best-of-three series, the former NBA cager spoke true to his word.

Smith shot an excellent 11-of-15 from the field and hit 56 percent from the charity stripe en route to 31 big points. He also had 18 rebounds, two assists, and a block to power the Elite to a 100-96 victory over the Elasto Painters.

“He vowed to really play well tonight. Talagang gusto niya makabawi from that Game One loss. I thank him for that,” said Blackwater head coach Aris Dimaunahan of the 6-foot-9 center.

“I think Game One I was too excited, and a lot of my shots are kinda short-handed ’cause I was just too excited to play. This game, I just came in and became myself. Just took my time, been aggressive, and my guys motivated me,” Smith said.

The win meant much to Smith, as it was Blackwater’s first playoff win. He didn’t have the same chance in his initial stint with the franchise back in the 2017 Commissioner’s Cup, as they only won twice in nine outings with him.

“Oh man, it feels amazing,” Smith said. “Before the game I know we’re down O-and-one, and you know if we lose, we go home. But something was just in me that was motivating me to come out here and do it for the franchise.

“They gave me a chance two years ago, and this year they asked me and called me. I’m just lucky to be here.”

This current Blackwater team is far different from Smith’s teams from two years ago. This team has changed for the better, though, based on how they have played this conference. And Smith was in awe after seeing it.

“Just getting here last week and seeing the improvements and the players they got are hungrier, the coaching staff… It’s great,” said the 28-year-old American, who came in last July 16 to replace the injured Staphon Blair.

“This team has come a long away. I feel like this is one of the best teams in this league from top to bottom – from players and coaches and owners and all that – because they put the work every day to become as good as they are.”

The Elite have now forced a deciding Game Three on Thursday, and that means a chance to enter the semifinal stage for the first time in franchise history. For Smith, he guarantees that his side will be able to bag the W.

“Yes, I’m gonna guarantee you,” said the former Houston Rocket confidently. “I’m confident in my guys, they’re confident in me. I know that team is gonna come out and say they’re gonna give it all their got. I know they wanna win it too.

“But, me personally, I feel like we got it. As long as we play together, play hard, we’re gonna get this win.”

Mac Belo tells Blackwater not to relax until final buzzer