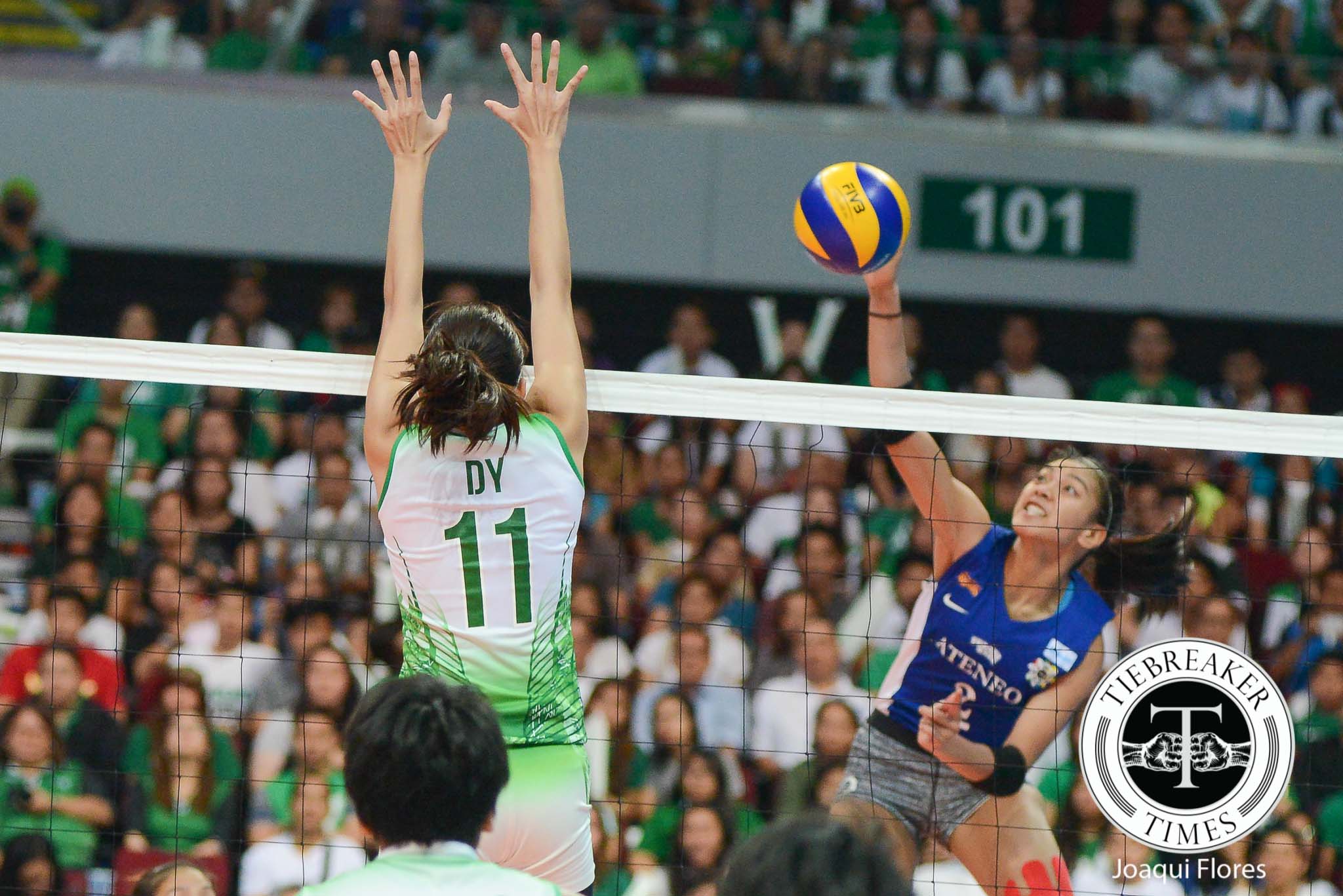 Three-time Most Valuable Player Alyssa Valdez could not be denied.

The Lady Spikers opened with a strong flourish, punishing Ateneo’s receivers for a 16-5 lead. Ateneo tried to retaliate, tr mming te lear down to seven, 17-10. However, the Lady Spikers sprinted out of a timeout, reestablishing their nine-point lead and never looking back.

Serving and passing better, the Lady Eagles heeded the call of their ruckus crowd and performed much better. Trailing 10-13, the Lady Eagles scrapped and clawed back into the match. Behind Alyssa Valdez’s dynamic attacking, the Lady Eagles soared to set point, 24-20, but the Lady Spikers found a shovel and dug themselves out of the grave. Asorbing the ringing boos of the Ateneo crowd, Mika Reyes calmly took to the service line and served splendidly. Reyes sandwhiched two aces between an Alyssa Valdez attack error, bringing La Salle to a deuce. Using their defense, La Salle took momentum in the last two points. Ara Galang and Kim Dy shot off the block in the last two points to take the lead.

With their backs against the wall, the Lady resorted to their most lethal option – give all the sets to Alyssa Valdez. Valdez blistered in a wire-to-wire third set win, allowing Ateneo a seven-point lead, 12-5, then protecting their advantage to extend the match.

Worn-out, the Lady Spikers surrendered a torrent of errors. With Valdez and Maraguinot carrying the offense, the Lady Eagles took an insurmountable 23-13 lead and forced a fifth set.

Alyssa Valdez capped the match with a gallant fifth set stand, scoring eight points including five straight in a stretch that pulled Ateneo to an 11-7 lead. The Lady Spikers just could not rally back.

The deciding Game Three will be on Saturday, 3:30 p.m. at the Smart Araneta Coliseum. The Lady Eagles are still undefeated in elimination matches since Season 76.

Coach Hans: UAAP football is on the rise