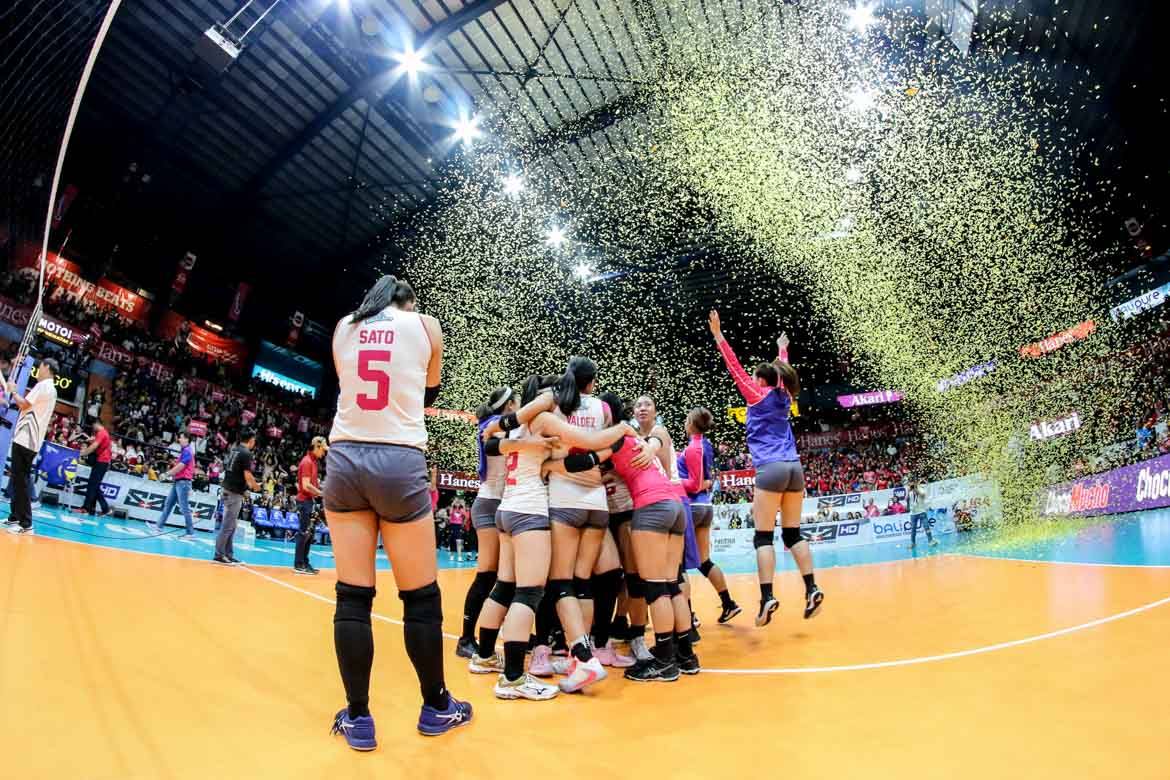 Creamline made history after history in the Premier Volleyball League on Saturday evening.

The Cool Smashers marked the 2019 PVL Open Conference as their undisputed territory, completing a historical campaign by subduing Petro Gazz, 28-26, 25-22, 27-25, in Game Two of the Finals at the FilOil Flying V Centre in San Juan City.

Creamline defended its throne en route to its third diadem to become the winningest team in the league, while pulling off the franchise’s first successful title defense. They also remained undefeated throughout 20 matches — an unprecedented sweep of both the elimination and playoff rounds, losing just a handful of sets in the process.

“Ever since Petro Gazz gives us a hard time to win, and one thing I commend about Petro Gazz is that they don’t care kung sino yung kalaban nila. They just really fight and play their game, and I can see it in their eyes na if they win, bonus na lang talaga, lalo na sa Finals,” Valdez added.

Valdez, a multi-time MVP, and freshly-minted top conference honoree Jema Galanza showed the way for the title holders. Valdez top-billed with 18 points built on 16 attacks, a block, and an ace, while Galanza had a stellar outing of her own with 16 markers.

Meanwhile, five-time Best Setter and Finals MVP Jia Morado served as the backbone of Creamline, ably distributing the wealth for the Cool Smashers to the tune of 24 excellent sets laced with four points.

The Cool Smashers locked in and seized control in the opening salvo of the all-important match, sprinting towards set point at 24-21. Cherry Nunag, though, strung two quick points which were then followed by a costly mishit from Jema Galanza that forged a deuce.

Risa Sato and Jonah Sabete then traded crowd-igniting hits in the two-to-win situation that locked the scores at 27. But Alyssa Valdez delivered in the clutch, uncorking the set-clinching hammers for an early advantage.

Another seesaw battle ensued in the second frame. Creamline, though, created crucial separation behind its imposing net and floor defense, building a slim 22-19 cushion. However, the Angels gave the Cool Smashers a dose of their own medicine as Jeanette Panaga roamed fiercely at net to slice the deficit to a solitary point, 22-23.

But Valdez provided the heroics for Creamline once again, restoring order with a differential hit. Sabete then misfired, as Petro Gazz fell to a precarious 0-2 mire.

In the decisive third frame, the Angels dictated the tempo with their combination play to hold a 19-16 edge. But it proved short-lived, as Valdez waxed hot and whittled away the deficit. Galanza then pummeled the momentum-swinging blows that pushed Creamline ahead, 22-21.

Sabete though refused to give way as she knotted the count, but Galanza quickly buoyed Creamline back on top, 23-22. Still, the Angels stayed alive and forced another deuce following errors from the Cool Smashers.

With the championship hung in the balance, Creamline relied on its lethal duo. Galanza and Valdez connived for the timely hits before Paneng Mercado committed an attack error, sealing the fate of the Angels.

On the other hand, PVL Reinforced queen Petro Gazz settled as first runner-up.

Prado, the co-Best Open Spiker of Galanza, topped the Angels with 11 points. Best Middle Blocker Panaga had 10 markers, while Sabete churned out a near triple-double of eight points, nine excellent digs and 11 excellent receptions. Cherry Nunag had eight markers as well.