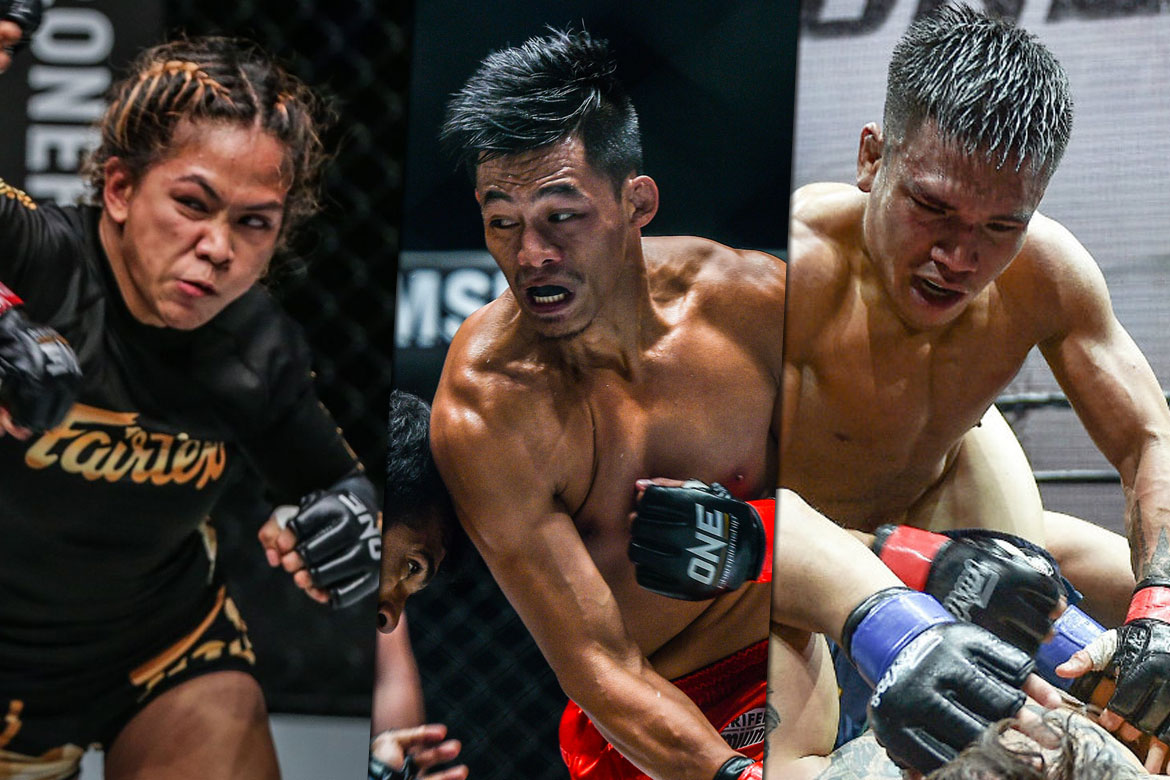 It will be a busy night for the Philippines when ONE Championship returns to the Singapore Indoor Stadium for ONE: King of the Jungle this Friday, February 28.

Fairtex studs Denice “The Menace Fairtex” Zamboanga and Mark “Tyson” Fairtex Abelardo will continue to make a name for themselves in The Home Of Martial Arts. Meanwhile, Team Lakay’s Honorio “The Rock” Banario restarts his journey anew.

For Zamboanga — who battles Mei “V.V” Yamaguchi on the lead card — it is all about proving that she belongs at the top of the women’s atomweight division.

The Thailand-based Filipina barged onto the scene with a dominant unanimous decision win over Jihin “Shadow Cat” Radzuan late last year. Now, she wants nothing more than to get a fitting follow-up win.

“Fighting a former title challenger really motivates me to train hard and bring home the victory. I’ve been working on my striking and wrestling because I know she’s a very strong and experienced fighter,” Zamboanga said.

“I work twice [a day] in every area of my game to make sure that I’ll be more than 100% prepared to face Yamaguchi.”

Like Zamboanga, her teammate, Abelardo, will also try to scale his division when he takes on the unbeaten “Pretty Boy” Troy Worthen.

Abelardo has so far lived up to his promise since winning the third season of Rich Franklin’s ONE Warrior Series. He went two for three, while scoring a dominating victory over Ayideng “The Kazakh Eagle” Jumayi to end 2019.

He knows Worthen is no a walk in the park, but if he wants to take a step closer to a shot at the ONE Bantamweight World Title, this is a match he has to win.

“Troy is a dangerous fighter with strong wrestling and grappling but he is yet to face a test with me. I always like to put on a show with my striking so the fans will see a lot of that. Fairtex has improved my striking more so I believe it will be superior to his,” Abelardo said.

“I want to continue the momentum and climb the ladder in the bantamweight rankings, taking all fights that are presented to me. I’m very hungry to win – expect fireworks in this one.”

While Abelardo and Zamboanga are soaring to new heights, former ONE Featherweight World Champion Honorio “The Rock” Banario hopes to start fresh.

He returns to his old weight class in his clash against Shannon “OneShin” Wiratchai, and Banario knows what this match means for his future.

Having lost four of his last five matches in the lightweight division, Banario hopes to revive his career in the division where he had early success as one of the pioneers in The Home Of Martial Arts.

“I believe that moving to featherweight will help bring the best out of me,” Banario said.

“It also motivates me to work even harder, especially after competing in lightweight for quite a while. I can’t relax in my training.”

With Banario having the training camp of his life in preparation for this move, fans can expect nothing but the best from him in Singapore.

“I am faster, more explosive, and the fans will surely enjoy an exciting match between two hungry veterans looking to make a statement to start the year.”

ONE Championship returns to “The Lion City” for ONE: King of the Jungle this Friday, February 28, at the Singapore Indoor Stadium.

Top 5 Performances From The Stars of ONE: KING OF THE JUNGLE

3 Bouts That Could Steal The Show At ONE: KING OF THE JUNGLE