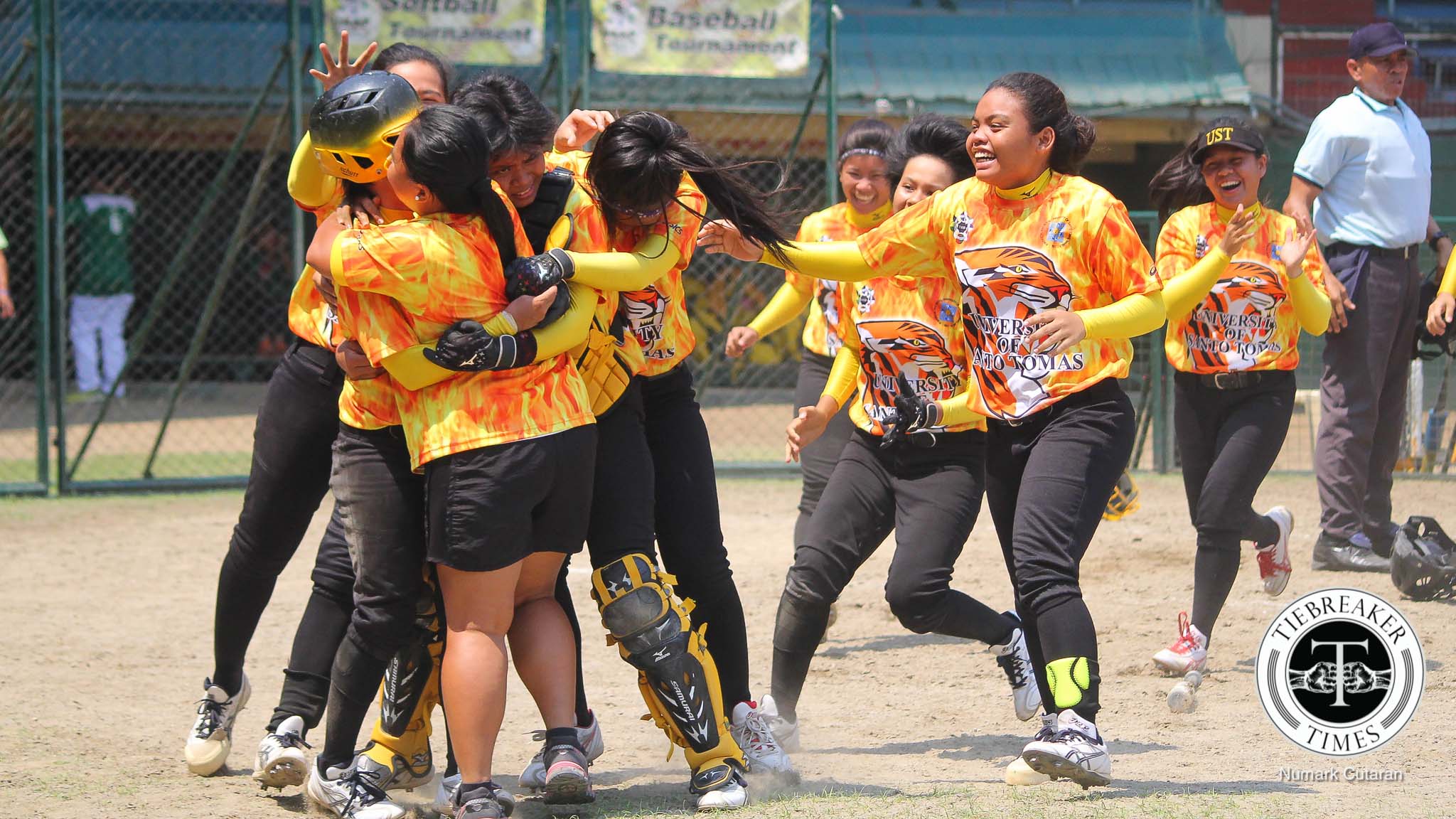 And bounce back they did.

The UST Tiger Softbelles pulled off an escape act courtesy of a CJ Roa single that scored Kristine Lacupa, to extend the Finals series to a winner-take-all Game 3, Monday afternoon at the historic Rizal Memorial Baseball Stadium.

Both Adamson University’s and UST’s defenses worked in the first three innings of the game, with both sides only allowing a single each. Reigning Most Valuable Player Annalie Benjamin reached first base for the Lady Falcons, while Jessie Belaño took the base for the Tiger Softbelles.

It was the reigning champions who threatened to register the first run of the game, as back-to-back hits from Riezel Calumbres and Lorna Adorable put them in a scoring position with two outs at the top of the third inning. However, UST shortstop Charm Oria easily dealt with Gelyn Lamata’s grounder for the final out.

With their defense in place, the España-based squad turned to their offense during their side of the fourth inning. Lacupa started off the frame with a base hit to the right field, while Roa followed it up with a single of her own. UST surprise starting pitcher Mallows Garde consolidated her stint in the circle in the ensuing play. The UST senior blasted a long shot to center field and scored Lacupa and Roa as the Tiger Softbelles took the lead.

Knowing the caliber of their opponents, UST padded their lead in the following inning. Lea Guevarra registered another lead-off single, before the Adamson defense sent Precious Areglado and Hannah Dela Torre packing. With two outs, Lacupa drove a long grounder to right-center that paved the way for a Guevarra run. Palma then doubled to the left field to score Lacupa. Roa added another RBI as the UST lead ballooned to 5-0 before the Lady Falcons dismissed Garde with a grounder.

With their backs against the wall, the defending five-time champions started their comeback attempt with a solo homer coming from Season 78 MVP Queeny Sabobo. Gaining the momentum, Lamata followed this up with another big base hit, before Benjamen popped a sacrifice fly to center field to score the former. The vaunted Thomasian defense then denied the Adamson more runs and held on to a 5-2 lead going into the final inning, as ace pitcher Ann Antolihao took her usual place in the middle.

Just as in their semifinals game against the University of the Philippines Lady Maroons, the Lady Falcons dug deep and found another last-gasp effort to try and win the game.

After Game One heroine Krisna Paguican flied out to first basewoman Garde, Calumbres carved a base hit to left field. Antolihao then dealt with an Adorable fly ball for the second out. With Sabobo earning a homerun earlier, the defense allowed her to get on base on four balls, similar to what UST did when they ended The Streak. However, the strategy backfired, as Lamata fired off a cannon for a clutch two-out three-run homer to tie the game at 5-all.

UST then took advantage of their final turn at bat with the top of the order. Adamson easily dismissed Dela Torre and Lacupa and went one out away for an extension. However, UST had other plans. With a 1-1 pitch, sophomore catcher Palma plucked a base hit into the right field to get on base. Lacupa was then subbed as pinch runner for Palma. Back-to-back Best Hitter awardee Roa then took matters into her own hands, firing off a rolling grounder as Lacupa crossed the plate to the deafening cheers of the team and the UST faithful in attendance.

Roa bucked a first-at-bat strikeout and fired three consecutive singles for UST. Garde, on her part, had a great outing offensively and defensively. The fourth-year pitcher/first basewoman had three strikeouts and three put-outs, along with a 2 RBI single.

Huge hitters Sabobo and Lamata paced the Lady Falcons with a homerun each, but it was the latter who carried the defending champions on the offense with a single to go with the 3 RBI homer.

Looking forward to Game 3 on Friday, March 18, Barredo plans on celebrating this win first before taking it day-by-day. “Celebrate muna then Wednesday back to training. Baka ma-pressure tong mga bata eh. We’ll be ready by Friday,” he closed.