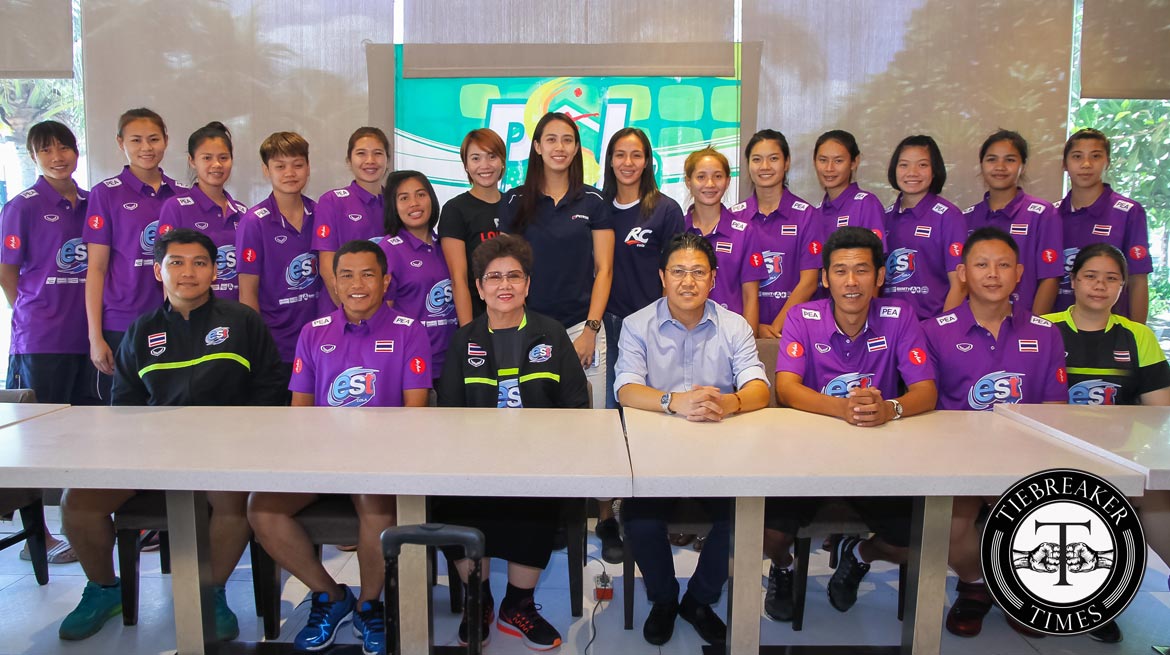 The Final round of the Philippine SuperLiga (PSL) Invitational 2016 just around the corner, and everyone is excited to see how some of the Philippines’ best club teams — namely the Petron Tri-Activ Spikers, F2 Logistics Cargo Movers, and the RC Cola Army Raiders — match-up against Thailand’s EST Club Cola Thailand team.

“I’d like to thank EST Cola for coming to Manila and accepting the invitation to participate in the PSL Invitational 2016. Of course, with the help of Thailand Volleyball Association, without the good relationship we have with them, EST Cola would not be able to come to Manila.”

EST Cola is the “team B” of the Thailand national team. With a mix of junior and under-23 national players, the PSL Invitational will make a good proving ground for both the young Thai team and the three Filipino club teams.

EST Cola’s head coach, Chamnan Dokmai, had the opportunity to speak in front of the media, and he shared his thoughts on the benefits that this tournament will have on his players.

“This is a good opportunity for our players. Many of them are very young. I know the Philippines has many strong teams. I won’t think about the results, but we’ll try to do our best,” he shared. “The players worked hard for this tournament. I’d like to thank the PSL again for this opportunity.”

But that’s not the only goal of the team. Dokmai also wants his players to build a bond with their Filipino competitors.

“I want my players to not only get experience from this tournament, but friends as well from the Philippines.”

A veteran of international competition, F2’s Aby Marano chimed in as well. “What we’ll focus on in this competition is to gain experience from Thailand, because we know they’re really good at this sport. For us, it’s really a privilege to play against them.”

RC Cola’s coach, Kung-Fu Reyes, mentioned how the tournament is a ground-breaking achievement for Philippine volleyball, adding that while it is extremely difficult to bring multiple teams and coaches to play with foreign teams abroad, it is much more economical to invite a foreign team to play against the best locals that we have here.

“For us Filipinos we’ll be able to gauge where we are not only locally, but internationally as well,” said Reyes.

He also added that this will be a good gauge on the quality of Philippine volleyball as well.

Hopefully, the PSL Invitational will be the start of further cooperation between the Philippines and Thailand volleyball communities.