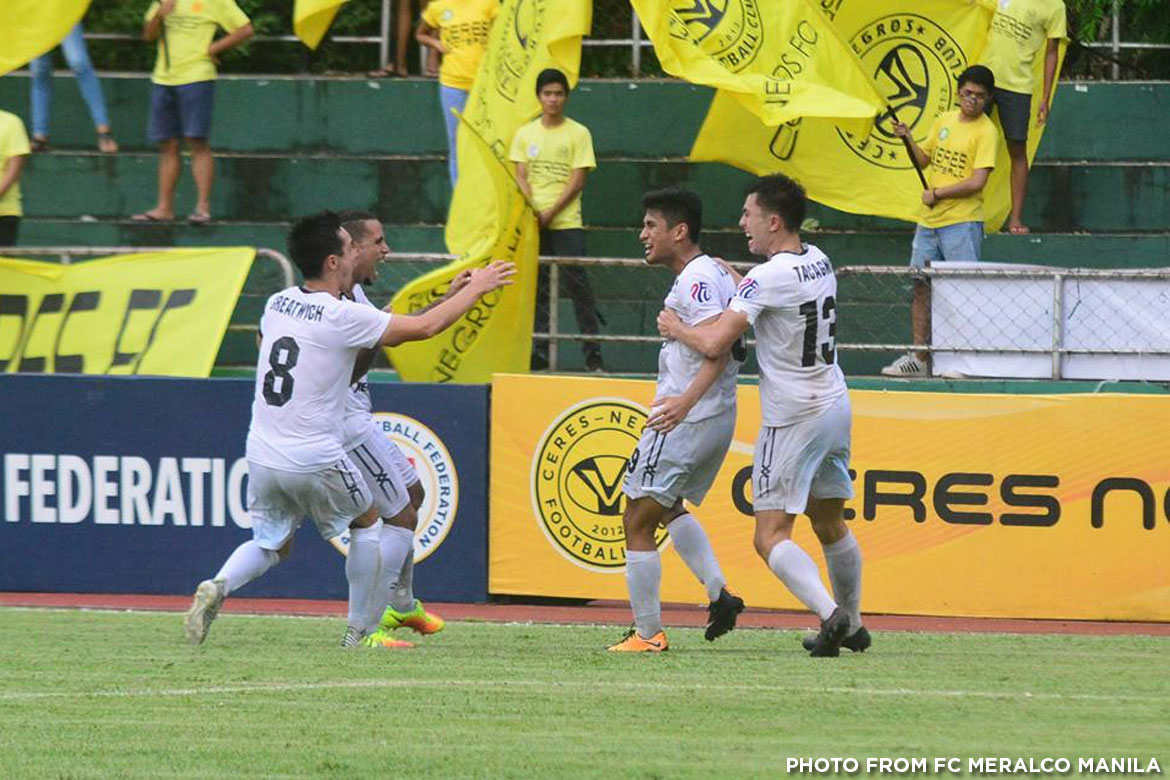 Three games took place yesterday in the Philippines Football League, with the one in Western Visayas grabbing much of the attention as a long-standing streak came to an end.

For the first time this season, Ceres-Negros have tasted defeat at home, falling to a 2-1 defeat against Meralco-Manila at their beloved home ground of Panaad Stadium Wednesday afternoon.

Interestingly, the Sparks had lost their home and league unbeaten runs against Ceres-Negros, who demolished them 7-0 just last month at the Rizal Memorial Stadium. Inevitably, many would regard this result as a revenge job of sorts for the Manileños, who also solidify their grip on top of the PFL table.

Yet it would just be three more points, albeit huge ones, for the Sparks as they continue their ascent in the league. The capital club endured a rough first half before striking first after halftime. Curt Dizon gave Meralco the advantage as he instinctively met a loose ball near the goal before tucking it into the back of the net.

Things just got better for the visitors approaching full time. They saw their lead doubled through Simon Greatwich, who smartly whipped the ball beyond Roland Müller’s reach to cushion the Manileños’ lead 17 minutes before time.

Manuel Herrera pulled one back for the Negrenses, who couldn’t find another one to salvage at least a point at home. They nearly did so had Carli de Murga been able to launch a shot on target in the 86th minute.

As the final whistle was blown, the Sparks had written their names in the history books. They officially became the first PFL team to triumph against Ceres-Negros in Bacolod, a feat fitting the stadium’s historical allure.

“Ceres are strong at home, but we stayed strong and dug in. We pushed each other until the 93rd,” Greatwich said after the match. His goal meant that Meralco-Manila now have an eight-point buffer over Kaya-Makati, while also having a game in hand on their Metro Manila rivals.

Ceres-Negros, meanwhile, stayed in fourth and have 11 points to make up if they are to overtake the league leaders. If fortunate enough to win all their games in hand, which stands at four, they will be able to leapfrog the Sparks by a point. Whether they do so remains to be seen.

JPV-Marikina’s 5-2 win against a fatigued Global-Cebu side sprang their bid to reach the playoffs back to life. Just three points behind Ceres-Negros in fourth, the Marikina club looked to put the pressure on the clubs ahead of them — one of which was Kaya-Makati.

Dan Padernal’s men nearly made it back-to-back wins on Wednesday afternoon at the University of Makati Football Field, after they took the lead twice only to lose it in as many times against Noel Marcaida’s charges. In the end, both teams settled for a point that brought mixed feelings to each side.

For Voltes, it could have been seen as two points dropped given the passage of play. Takumi Uesato scored twice to put his team ahead in both instances. Unfortunately, it wasn’t enough for Voltes to run away as the winners for the second time in three days.

Uesato didn’t take long to break the deadlock when he punished Kaya’s lackadaisical defending to open the scoring just two minutes after kickoff. Voltes’ first lead in the game did not last too long, as the hosts got the equaliser after 14 minutes. Robert Lopez Mendy, one half of the menacing M&M strike force of Kaya, struck off a poor clearance to restore parity early in the opening half.

Goals did not come easy for Kaya-Makati, unlike in their previous games, as they were missing the presence of the suspended Jordan Mintah on the pitch. How they wished they had him in this game when they fell behind once more through Uesato’s second strike 39 minutes in. It was a gift of a chance, which the JPV striker did not waste at all as he punished the otherwise brilliant Kaya keeper Ref Cuaresma.

Looking back, Padernal knew his team was good enough to have held off their opponents for a win. Nonetheless, he focused on the positives by comparing their recent outing with the previous one against Kaya. “The positive thing is that we played better than we did in the last game against Kaya. One point is good for us,” the JPV gaffer told the press.

As for Kaya-Makati, they have two persons to thank for. One is Cuaresma, whose saves scattered throughout the match helped keep his team in the game, and the other is Adam Reed. The latter converted a 49th minute penalty which tied the score for good.

Earning Man of the Match honors, Cuaresma deflected praise to the whole team and staff for showing character and togetherness in the face of adversity. “The players responded well. Everything was collective today. I just did my part… When you’re down, this is the time where you don’t point fingers and help each other [instead]. Credit goes to coach Noel and the whole coaching staff, and the whole team. I just played my part. As one of the veterans, it’s my job to step up,” the man between the sticks stated.

Having failed to win this game, Kaya-Makati find themselves eight points behind Meralco-Manila. Having played a game more than their Metro Manila foes, it could mean that Marcaida’s men may slip further if the Sparks win their game in hand.

When these last two teams faced each other in Vigan, they were keeping each other company in misery. A lot has changed since then, and if there is a manifestation of how the last month has gone by, it was presented by Stallion-Laguna’s 4-1 victory over Ilocos United at the Elpidio Quirino Stadium.

Stallion’s last visit in Ilocos ended abruptly, as an interrupted match due to unplayable pitch conditions rendered a 1-1 match halftime into a draw. The Laguna-based team jumped on the gun quickly this time around to make sure they won’t feel shortchanged. Nate Alquiros powered Stallion in front 13 minutes into the match. Teammate Carlo Polli padded the advantage with a goal of his own, 20 minutes later.

Facing a 2-0 deficit, Ilocos United showed determination to stay in the game. Through Chima Uzoka they were able to do so, as the National University footballer drilled a neat finish two minutes before halftime.

Last time Ian Gillan’s men took to the field, they were able to rescue a point thanks to an added-time Ben Tolete, Jr.’s strike against JPV. There was no encore this time, with Stallion restoring their two-goal lead 10 minutes into the second half. Jhan-jhan Melliza got himself in the scoresheet to settle the away team’s nerves.

As the match was destined to slip away from the home team’s grasp, the visiting team from Laguna turned on the style when Polli capped off the scoring with his second goal of the night. It ensured three points and a happy ride back home for Stallion-Laguna. They are just eight points adrift of the playoff places, with over a quarter of the season still left to be played.

As for Ilocos United, their eleventh defeat of the season meant they remain at the bottom of the standings. They only have four points to show and are still without a win in the PFL.