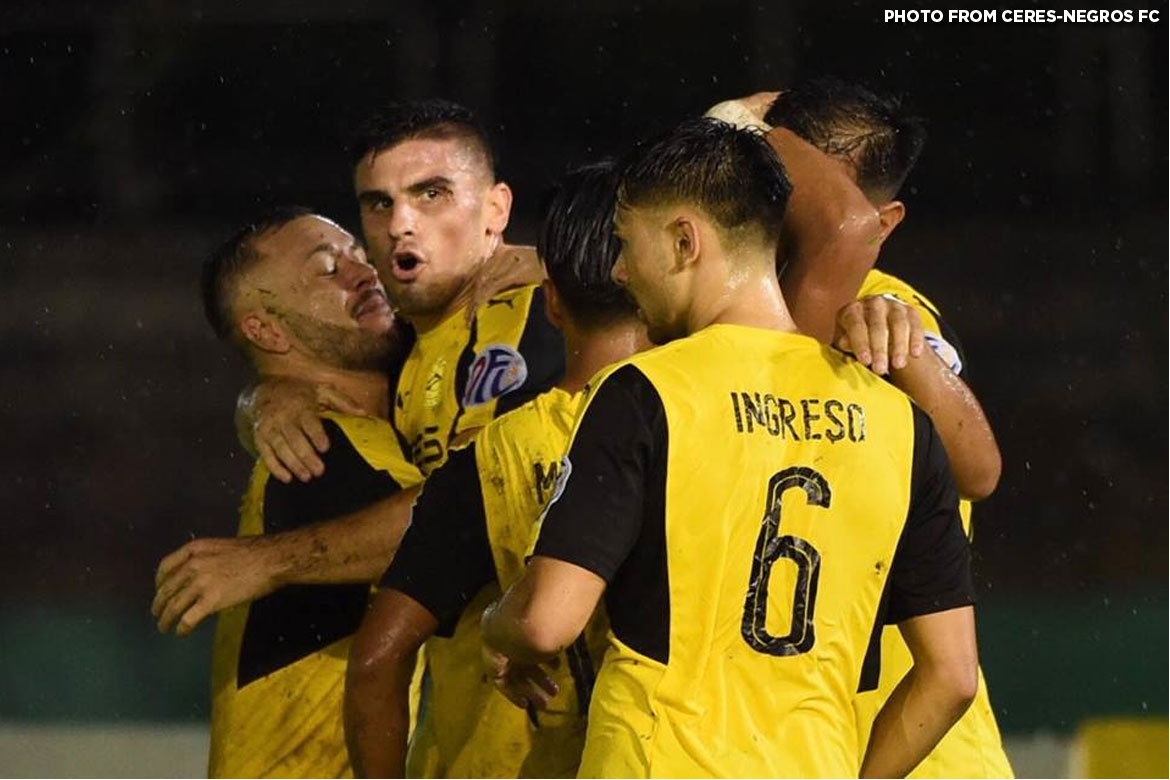 The first match week of the Philippines Football League for the month of October provided different kinds of thrill to the fans of the country’s elite club tournament. All eight teams were in action, braving the rainy weekend that made playing conditions a little bit tougher than usual. Here’s how the action unfolded from around the league:

A late Fernando Rodriguez goal capped off a pulsating 90 minutes of football at the Panaad Stadium last Saturday as the Spaniard’s team, Ceres-Negros, survived Kaya-Makati’s challenge by registering a vital 3-2 triumph.

With plenty of games in hand, Ceres-Negros look on track to pace the league once they complete the rescheduled outings. The match against Kaya, however, proved that there aren’t easy games in the league. The visitors were targeting a shock result and acted quickly on it from the get go.

Not more than three minutes passed when Noel Marcaida’s men broke the deadlock. Usual suspects Robert Lopez Mendy and Jordan Mintah connived to score the first goal of the match. The former’s cross was expertly nodded by his partner-in-crime, signalling the start of an exhilarating showdown.

Not used to falling behind at home, Ceres answered with a swift turnaround. Kaya’s advantage only lasted for seven minutes as Bienvenido Marañon quickly replied to Mintah’s effort with a fine finish from skipper Arnie Pasinabo’s cross. With momentum, the hosts grabbed a go-ahead goal in the 15th minute when Rodriguez’ superb strike from a free kick left Kaya keeper Ref Cuaresma stranded.

There would be no goals before the break as both defenses eventually got their bearings on a rough pitch caused by the rainy weather. As the score remained the same at the interval, the visitors were more motivated to attack a strong but not invincible Ceres defense.

Kaya got what they were looking for 10 minutes after the restart, albeit a bit controversially. In what was supposedly a routine save by Roland Müller, Kaya got to squeeze the ball in courtesy of Alfred Osei. It looked like the Ceres goalkeeper already had the ball in his hands before a collision with Mintah made him lose possession of the ball. Osei was the most alert man in the vicinity and the defender made no mistake from close range.

Ceres’ coach Risto Vidakovic felt aggrieved by the decision and was sent to the stands for voicing his displeasure. Defender Jeffrey Christiaens followed him approaching full time when his duty foul on a counter attack led to a dismissal as he acquired a second billable offense on the night. Nevertheless, this did not deter the hosts who continued to dominate the action.

If anything, it inspired them as they won themselves a penalty five minutes before time. Fortunately for Kaya, Cuaresma stopped Marañon’s attempt. At that point, a draw looks destined between the two teams. The Makati club’s luck ran out right at the end though as Rodriguez delivered a confident finish to the delight of the Negrenses in attendance.

The gap between the two teams is now down to three points as a result with Ceres still having seven less games played. In addition, they are just seven points behind league leaders Meralco-Manila who have played five more than the Negrenses. Kaya stays in second place although if Ceres can maintain their form, it might not be the case for long.

After 19 tries, Davao Aguilas finally barged into the win column as they blanked fellow strugglers Ilocos United, 2-0, at the Davao del Norte Sports Complex yesterday afternoon. A goal at either side of the break sealed their first ever three points in the PFL.

Staple goalscorer Harrison Sawyer delivered the first goal of the afternoon 25 minutes in. That’s the fourth time the Australian has found the back of the net this season, proving that he is an I integral part of his team’s attack.

Ilocos failed to do much against the much-improved Aguilas who have recruited recognized stars in Younghusband brothers, Matthew Hartmann, Simone Rota, and Jason de Jong. Their previous meetings, both ending at 1-1, took place prior to Davao’s transfer window splurge.

The gulf in class was evident on in the pitch as Davao made their dominance count. A goal from James Younghusband 24 minutes before time made sure there won’t be any comeback of sorts from the Ilocanos, whose sole win in the PFL came from a come-from-behind triumph against JPV.

“We are happy with the win. I guess the week-long break gave us a lot of elbow room to do the adjustments, and develop our style of play. I am very satisfied that in the end, we ended up winning,” newly-minted Coach Marlon Maro stated after the match. He also thanked the fans for their unrelenting support, expressing delight that they were able to reward their loyalty with a victory.

Davao has nine more games in the league and is still mathematically in the race for the playoff spots. They need to start a winning streak first, however, before looking at the bigger picture. IIlocos, meanwhile, are now four points behind the Aguilas and are dead last with only six games to play.

Only two teams managed to leave the Queen City of the South with a point and the trend stayed that way following JPV-Marikina’s visit as Global-Cebu bagged a 2-1 home win in what was a crucial encounter between the two playoff aspirants Sunday evening at the Cebu City Sports Complex.

Paolo Salenga gave the hosts an early lead from a set piece just four minutes in. It’s a situation Global hasn’t been unfamiliar with as they are yet to trail in fortress Cebu. Chances became few and far in between since then as both teams took time to manage the challenge at hand.

Despite going a goal down, JPV looked undeterred as they kept on finding ways to test the Cebuanos on defense. While they did not produce an equalizer, Voltes kept Global busier than the hosts would like at the back and as far as keeping the margin low is concerned, it was job well done for the visiting team.

They do have goalkeeper Felipe Tripulca Jr. to thank as his stop on Pika Minegishi’s shot preserved the one-goal deficit entering halftime. Yet there was nothing the JPV keeper could do in the second half to stop the Philippines international from claiming a crucial second goal for Global-Cebu. Minegishi cushioned his side’s advantage – a luxury they needed come full time – with a crafty move that bamboozled the JPV back line.

Global didn’t get to enjoy the increased lead for long after JPV’s J Baguioro pulled one back for Marikina. His tap in off a Patrick Deyto save made things a bit more uncomfortable for Global, who needed a win to strengthen their grip on one of the playoff spots.

Gladly for Global, the advantage was rarely threatened after the last goal. However, their inability in finding an insurance goal made for an interesting closing minutes of the match. At the end of what had been a tight affair, Global held on to record their sixth home win of the season.

It allowed them to keep a one-point gap with third seeded Ceres and more importantly stretch the breathing space they need from Stallion. The Laguna club has nine points less than Cebu’s 37 with only five games remaining for Armando Heria’s team.

Following a tight derby defeat the last time around, Meralco-Manila targeted to bounce back after the international break against the resurgent Stallion-Laguna team. Their plans fell through, however, as it was Stallion-Laguna who had better potential in taking all the points. Fortunately for the Sparks, the game ended without a goal at the Rizal Memorial Stadium to spare a valuable point in their impressive 2017 PFL campaign.

The visitors produced more shots, 13-4, despite resting key cog Jesus Melliza who started from the bench. Gabriele Mascazziani, Nathan Alquiros, and Yuki Versoza tried to shoulder the load early on but no one among them can find the back of the net. On the other end of the pitch meanwhile, Benito Rosalia Jr. had little to do in the opening half, reflecting his squad’s control of the clash.

The second half remained cagey in its opening stages but as both teams thought of going for all the marbles, the game gradually opened up. Stallion still looked more dangerous and as they smelled blood, Melliza entered the fray to speed up the process.

With momentum on their side, the Laguna team had a penalty shout ignored by the officials. Fitch Arboleda’s shot may have been blocked by Jake Morallo’s arm which they thought warranted a penalty. Ariel Montaña, the game’s chief official, did not agree.

The draw was indeed on the cards but not without each team getting one more go before full time. Alquiros squandered a glorious opportunity to break the deadlock from close range. Meanwhile, the ball bulged the back of the net on the other side only for it to be ruled out as Tahj Minniecon, whose shot was stopped by Rosalia, was offside. It rendered Jinggoy Valmayor’s rebound goal useless.

The visitors expressed dismay about the result with Polli suggesting they were the better unit in the match. His coach, Ernest Nierras, agreed. “It was a well-played game for both sides. We wanted to control the middle of the pitch and we did,” Nierras uttered with a slight hint of disappointment as the score did not reflect what transpired on the field.”

While his team looked to have dodged a bullet, Aris Caslib personified Meralco’s standards. “We wanted three points so this is a setback for us,” he declared in the post game press conference.

The team’s form entering the playoffs is one of the concerns Meralco would need to address. While not officially there yet, it would take a lot of bad luck for them to miss out on the semifinals.

On the other hand, Stallion’s playoff hopes are slowly fading away. They can’t afford to lose more points like this if they are to squeeze their way into the playoffs.