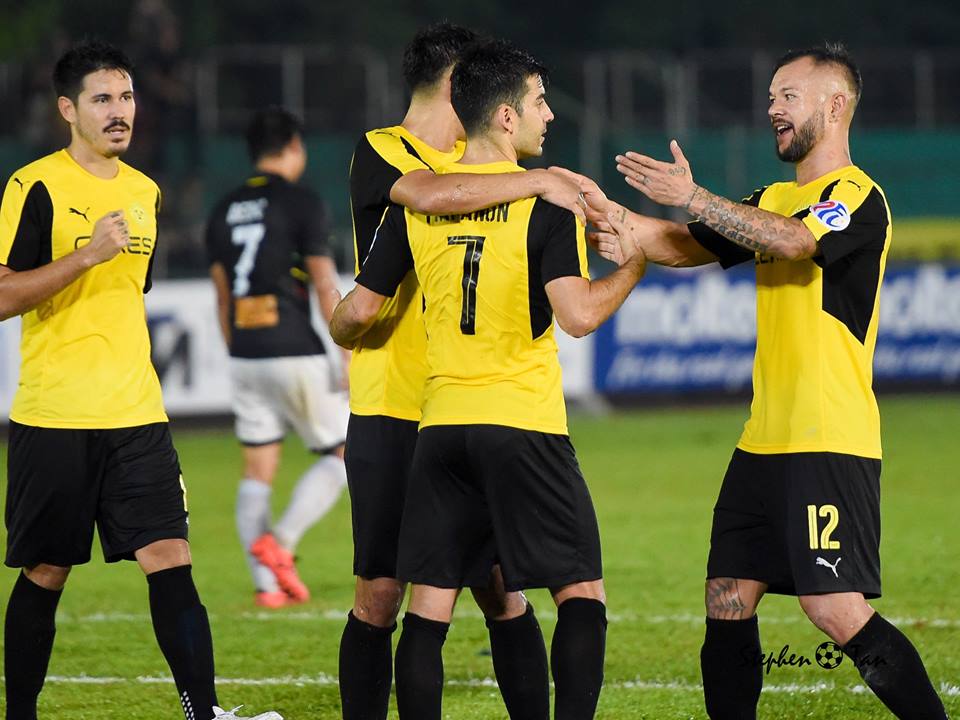 Another round of the 2017 Philippines Football League saw different twists and turns. But in the end, it was JP Voltes-Marikina who will enter the new week on top of the table

From losing 1-5 in their opening day encounter with FC Meralco Manila, Stallion Laguna FC showed marked improvement to earn a 1-1 draw at the Rizal Memorial Stadium in Manila last June 24, 2017.

Azkals skipper Phil Younghusband opened the scoring when he converted a penalty he himself won at the 15th minute. With a goal ahead, Meralco dominated possession and created goalscoring chances, only for its momentum to be halted due to a 30 minute stoppage because of rain.

Upon the game’s resumption, it was Stallion which retaliated with renewed vigor. That newfound energy resulted into a goal when Fitch Arboleda and Jhan-Jhan Meliza combined for the latter to level the proceedings at the 60th minute.

Meralco was on the ropes. The Sparks were on their way to a second consecutive draw and it could have been worse. In the game’s final moments Arboleda found space to shoot and could’ve scored the goal which would’ve won Laguna its first game, but a fantastic save from Manila goalie Ace Villanueva kept the scores as it is.

It ended Manila 1-1 Laguna and both teams had separate stories to tell after the game.

“For us it’s a setback but end of day target is to be top four then important matches come after,” shared Meralco coach Aris Caslib.

On the other hand, Stallion deputy coach Richard Leyble was pleased with his men. Leyble explained, “Ginawa lang namin yung mga dapat namin gawin. I talked to my players, what we trained for, we should apply in the field.”

JPV-Marikina’s victory over Global-Cebu the following day relegated Meralco (16 points) to 2nd in the standings while Stallion (4 points) is still stuck at 7th place.

Four days after its 2017 Singapore Cup exit at the hands of S.League side Hougang United F.C., Ceres-Negros FC looked to put on a show against Kaya-Makati FC at the Panaad Stadium in Bacolod.

In the end, one man’s name was on the home fans’ lips after 90 minutes of action. Spaniard Bienvenido Maranon scored a hattrick (45+2′, 70′ & 89′) to help continue his club’s rise towards the top four of the league table.

Kaya’s Robert Lopez Mendy pulled a goal back for the Makati club at the 55th minute, but it wasn’t enough to change the tide. Despite the win, Ceres (7 points) are still three points behind fourth place Kaya (10 points), albeit the latter has played three more games this season.

In the battle between the northern and southern parts of the country, Davao Aguilas FC and Ilocos United FC’s search for that inaugural victory in the 2017 PFL season has been prolonged after a 0-0 draw at the Davao del Norte Sports Complex in Tagum City last June 25, 2017.

After earning a 2-2 home draw against Meralco a few days ago, expectation was high that Davao will finally barge into the win column, although it wasn’t meant to be. The Aguilas may have dominated the contest but finishing woes hindered their shot at three points with Ilocos goalie Baba Sampana the prime suspect of that case.

Samapana made good stops against Serbian defender Milos Krstic and Nate Burkey in the game’s final moments to salvage a point for the visitors. With the result, Davao (4 points) and Ilocos (2 points) find themselves at 6th and 8th place in the standings respectively after seven games played each.

Newly-installed Global Cebu FC head coach Azbar Nawas had a debut to forget as he saw his side lose 1-2 against JPV-Marikina at the Rizal Memorial Stadium in Manila.

After a slow start, Takashi Odawara’s 25th minute header sent Marikina on its way to victory. The Japanese skipper then doubled his club’s cushion at the 55th minute with a fine finish. Global substitute Sekou Sylla pulled one back for the Cebu team after 69 minutes via a header, but any comeback wasn’t forthcoming.

With the victory, JPV usurped Meralco Manila to got top of the standings with 18 points. In contrast, Global (10 points) had to make do with its second lost this season to which the Dan Palami-owned club are now 3rd in the standings.

Ceres-Negros vs Stallion Laguna & Davao Aguilas vs Global Cebu FC, Both fixtures shall be played simultaneously at 4:00 PM on June 28, 2017 (Wednesday).