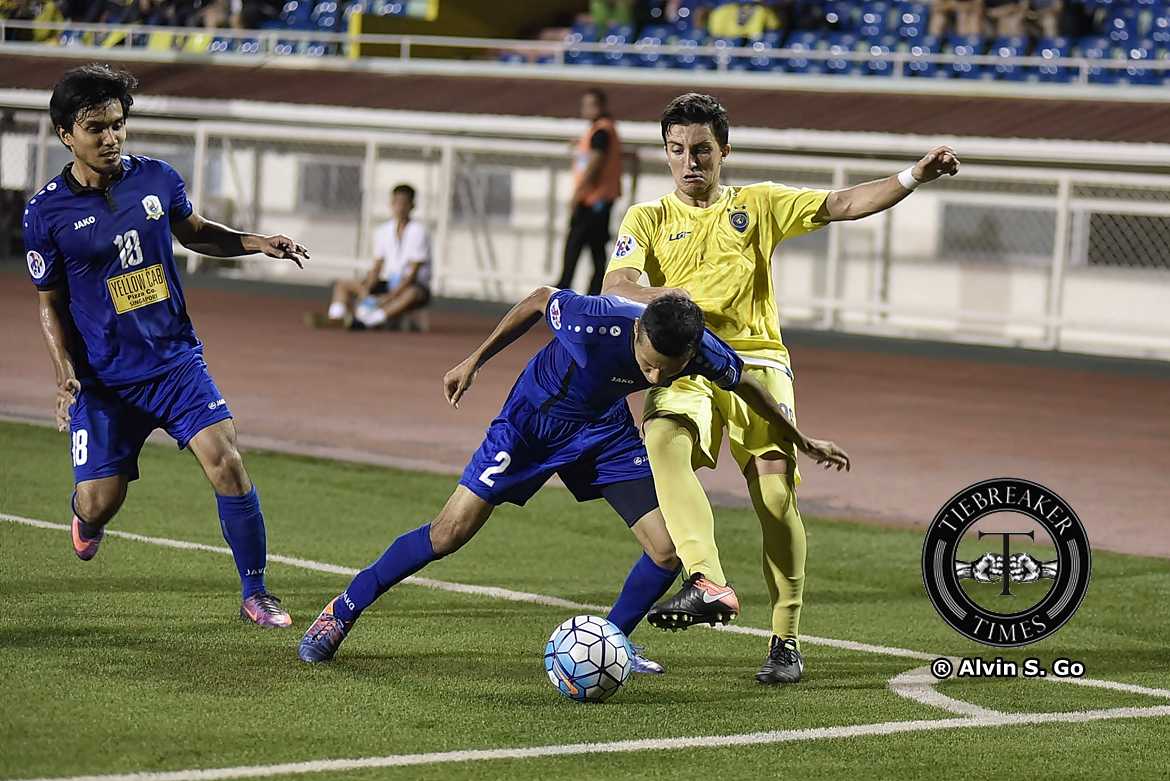 It’s one small step, but an important one nonetheless for the sake of Philippine football.

Global Football Club enjoyed a memorable 2-0 win over Singapore club Tampines Rovers to advance to the second preliminary round of the 2017 AFC Champions League.

Ahamd Azzawi (61′) and Misagh Bahadoran (73′) provided the goals for the home side tonight at the Rizal Memorial Stadium in Manila. Khairul Amri could have pulled one back at the 88th minute but his penalty was saved by Global goalie Patrick Deyto.

“I came here only about four days, but today the players they keep my advice so second half we get two goals and (Deyto) saved a penalty…. I’m so happy,” commented Global coach Imai Toshiaki.

Both teams started the match in anemic fashion. Set pieces were the main avenues of the two clubs’ attacks as there was a considerable lack of fluidity in the final third of the pitch.

Global skipper Bahadoran signaled the home side’s attacking intent when he initiated an offensive sequence all by himself. Bahadoran controlled the ball majestically which allowed him through on goal, only for Rogers goalie Mohamad Izwan to make the save.

Izwan was then called to action once again when the home side won a free kick at the edge of the Rovers’ box. Matthew Hartmann stepped up, only for his attempt to be nothing more than a routine stop for Izwan.

It took a while, but the away side finally got going offensively halfway through the period. Rovers forward Khairul Amri delivered a ball into Global’s box which was headed over the goal by his captain Madhu Mohana.

By this stage of the contest, Bahadoran cut a forlorn figure in the game. Not only was he isolated up top, his teammates failed to give him the type of passes he needed in order to threaten the Rovers goal.

True to form, it took a set piece for Global to have its best chance of the game yet. From a corner, Dennis Villanueva found space and unleashed a header which was parried away by Izwan. It was Global’s best chance and one they sorely needed to convert.

Moments later Global had a nervous moment in its box as Rovers’ Japanese forward Ryutaro Megumi took advantage of the home side’s carelessness with the ball and had a sniff at goal, but Deyto was alert to thwart him.

It finished goalless at the break which was a fair result after 45 minutes. The duo needed to improve offensively if they wanted to get that win.

Come the second half, Global put up a show to seal the game. Bahadoran, again, was spearheaded the siege and his goal-bound shot was cleared off the line by a Rovers defender. After which, Jerry Barbaso penetrated the opposition half and found an unmarked Hikaru Minegishi who only shot wide.

That goal was coming for Global and it inevitably came at the 61st minute when good interplay from Bahadoran and Azzawi afforded the latter some space to direct his shot towards the top corner. Global fans, players and coaches were ecstatic and momentum was with them.

Bahadoran then finally got the goal he deserved at the 73rd minute when his attempt outside the Rovers box was deflected past Izwan to double Global’s advantage in the game.

The home side was rarely threatened afterwards and even a penalty by Amri failed to get past Deyto who performed a wonderful stop to keep the scores as it is. In the end it finished Global 2-0 Rovers to as the home side earned a precious victory in the historic ground.

Global’s reward is a trip away at Australia to face Brisbane Roar on January 31, 2017. The game shall kickoff at 5:00 PM Philippine time.

“I think Australian players, they are taller and they have good power. But I think our strong point is agility and good technique so many players have good ability. Next game… I hope our team will have a 100 percent performance. I hope,” concluded Toshiaki.

Tiongson thankful for opportunity given by AMA Online Education