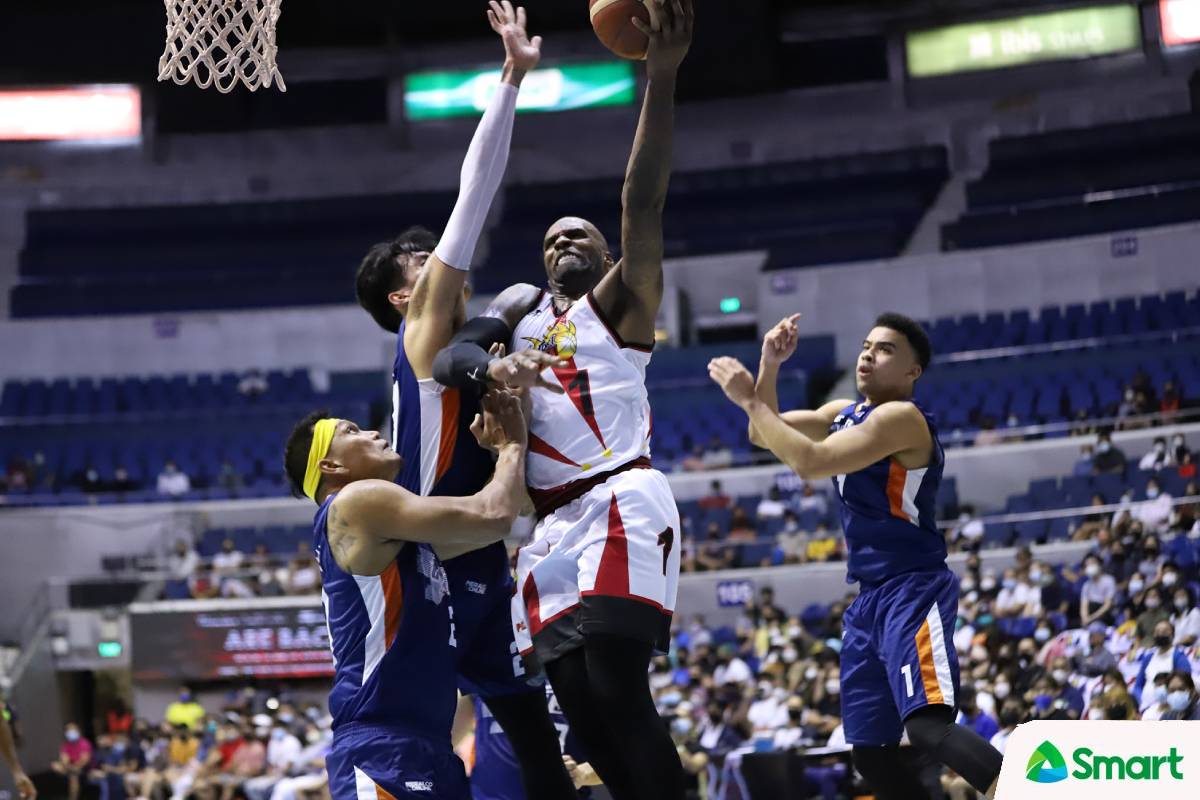 Shabazz Muhammad haunted the team he was supposed to play for as he carried San Miguel to a come-from-behind win over Meralco, 115-110, in the 2021-22 PBA Governors’ Cup, Saturday night at the SMART Araneta Coliseum.

The NBA veteran exploded for 57 points, 45 of which he made in the second half as he carried the Beermen after trailing by as many as 26 in the first half that even coach Leo Austria thought was a wall too high to demolish.

But then, the 29-year-old proved him otherwise with such an exceptional performance, where he shot 62-percent from the floor that included a 5-of-9 clip from deep. He also collected 19 rebounds in over 45 minutes of play.

Muhammad delivered all the way up to the final moments. He picked his own miss from the foul line and cleaned it up with just 29 seconds left to give his side the 111-110 lead after allowing the Bolts to charge back.

He also made sure that Chris Ross’ efforts in forcing a turnover to Tony Bishop won’t go for naught. He canned both of his free throws with 20.9 ticks left to seal the deal — and win their final elimination round assignment.

“For us, it looked like a miracle against Meralco,” said Austria. “I thought na it’s impossible. But sabi ko nga, miracles happen.

“I think what happened tonight is a gift for us and it’s a wake-up call for us and I hope this momentum of us may continue dahil next time, it’s playoff time. I’m so thankful dahil na-unleash namin yung potential si Shabazz,” he continued.

Per league stats chief Fidel Mangonon III, Muhammad’s 57 are the most points in a PBA game since SMB’s Tyler Wilkerson had 58 and NLEX’s Al Thornton had 69 versus each other in the Beermen’s 131-127 3OT win in April 2016.

“I think we didn’t make a mistake in changing him because he lifted us in this game,” said Austria as his team is now with its third import in the tilt.

Meralco was led by the 29 points and 14 rebounds of Bishop, who committed five turnovers, two of which in the endgame both versus Ross.

Bong Quinto made 18 points. Allein Maliksi had 16 points, while Chris Banchero and Aaron Black had 13 apiece for the Bolts, who are now sharing the fourth spot with another 6-4 team in Alaska after losing their third straight.

Leaders of the league just weeks ago, Meralco will look to end its woes against Phoenix Super LPG on Friday, March 11, 3 p.m. at the Big Dome.

#ReadMore  Kousei to fill shoes left by Iy4knu in RSG