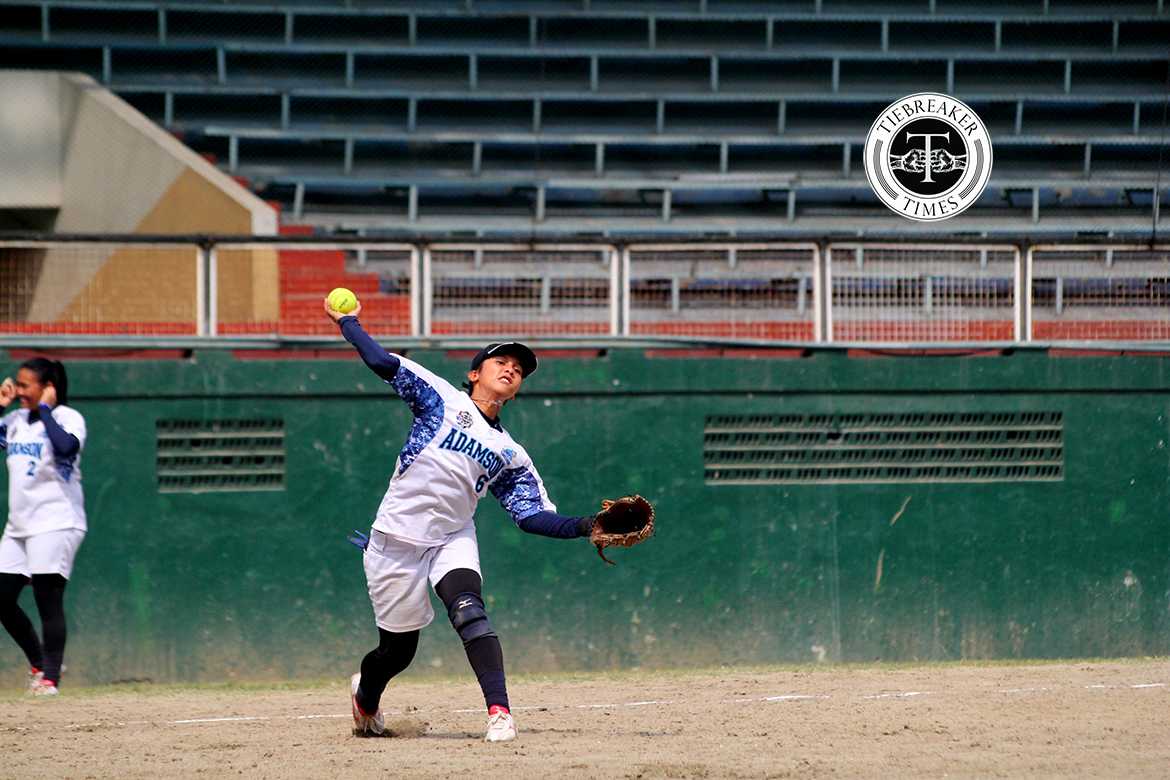 When it rains, it pours.

Under the hot summer sun, the defending five-time champions, Adamson University Lady Falcons, gave the University of Santo Tomas Tiger Softbelles a Finals baptism of fire in scoring a huge five-run fourth inning en route to a 9-2 demolition to take Game 1 of the UAAP Softball Finals, Friday at the Rizal Memorial Baseball Stadium.

Smarting from their huge win against Adamson that ended The Streak, the Tiger Softbelles threatened early in the first inning. Hannah Dela Torre got on base due to balls before a CJ Roa single to the center put the former to scoring position. Nonetheless, reigning Most Valuable Player Annalie Benjamen fanned Mallows Garde to prevent a breakthrough run.

The Thomasian defense held the Falcons in the first inning but the reigning champions got their bearings in the second. Dely Covarrubias drove in a grounder to left field and reached second base to jump-start the offense of the Lady Falcons. Benjamen then sent a hot grounder to second basewoman Dela Torres that she could not handle to reach first. With runners at the corners, Riflayca Basa pushed another hit to the ground to score Covarrubias for the game’s first run. Super-senior Khrisna Paguican then singled to the same spot to add another run courtesy of Benjamen.

The Tiger Softbelles then cut the deficit in the following inning with the top of the batting order working on offense. Benjamen walked Kristine Lacupa to start off the frame while Dela Torre broke the 1-all pitch for a huge double. National team mainstay Celestine Palma, in the next at bat, sinlged to score both runners. UST attempted to cut to the Adamson lead even further after a fielding error by Paguican; however, shortstop Sabobo played heads-up defense and caught Oria’s fly ball and threw to Severino to force Roa out on a double play.

That defensive gem of an inning fired up the defending titlists in their end of the fourth frame. As usual, the bottom of the order made their mark on the Falcons’ offense. After Angelie Ursabia lined out to the pitcher Ann Antolihao, Basa and Paguican gained bases once more. Riezel Calmubres then sent the ball into the first baseman-second baseman gap for a single as the runners on first and second crossed the plate, 6-2. UST took a sigh of relief after Adorable sent a long fly to Lacupa, but the Adamson offense was not yet done. Graduating Sabobo plucked a double to advance Calumbres to third, before Gelyn Lamata registered his only hit of the game – a huge 2 RBI single to ped the final score at 9-2.

“Always continue to believe in yourself that you can and that you will. Maybe, in one big situation, makakapag-contribute kayo ng kelangan na kelangan kayo,” Santiago shared regarding what she told the bottom of her batting order. “So I think nag-step up sila dahil dun. Pineprepare talaga nila ito.”

The Falcons never looked back at the top of the fifth as three batters went up for UST, but the former’s defense easily dismissed them all. The game was over after just over an hour as Adamson clinched Game 1 of the Finals in a dominating mercy-rule fashion.

Paguican had another solid Game 1 of the Finals, similar to her showing last season. The graduating third baseman had two singles and two runs in an opportune time for the Falcons. Calumbres and Lamata both registered huge at-bats as they carved a 2 RBI single each, despite having unsuccessful turns in the first innings.

Reigning MVP Benjamen anchored the defense of the Adamson after allowing just three hits in the five innings she pitched. On the other hand, Palma was the lone bright spot for UST after she sent 2 runners home with that long single.