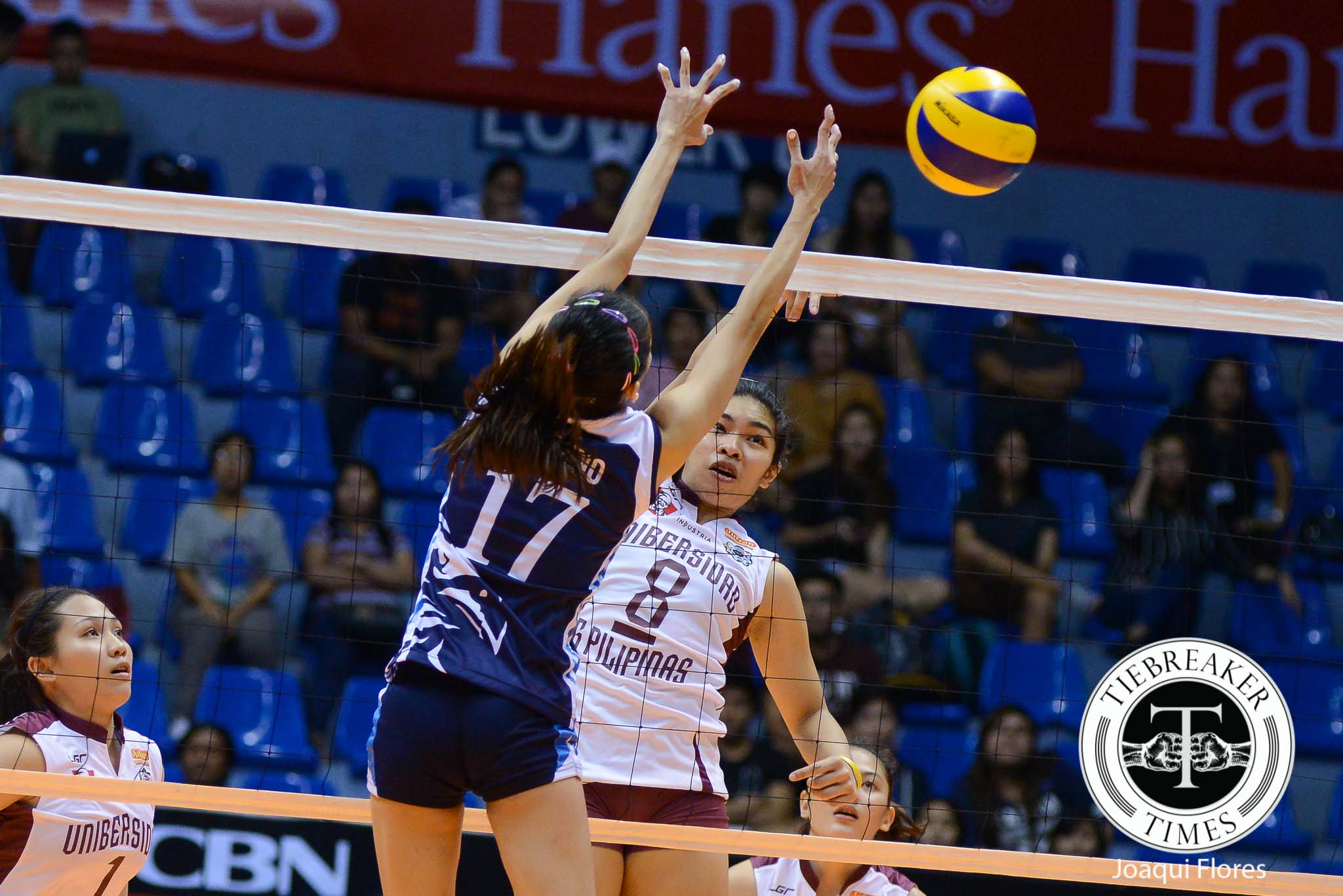 After dropping matches to both of last season’s finalists, the University of the Philippines Lady Maroons eked out a character-building win over the Adamson University Lady Falcons 27-25, 25-27, 25-20 , 25-19 in the UAAP Women’s Volleyball Tournament at the FilOil Flying V Centre earlier today.

Fundamentally sound, UP controlled much of the first set until they began surrendering errors. Down by five, 8-13, Adamson fought and tied the match at 14-all through Mylene Paat’s serving and Jema Galanza’s attacking. What followed was an extended exchange of leads, with both teams holding a two-point lead at one point. The Lady Falcons last held the lead at 20-18 before UP countered with a Bersola hit then an ace. The set dragged on to a deuce, with the Lady Maroons triumphant at their third set point chance. After a Fhen Emnas service error, UP rookie Justine Dorog hopped off the bench and served an ace to clinch the set.

UP were again in the driver’s seat in the second set, leading 22-17, but the Lady Falcons again found a way to inch back into the set. With May Roque serving, the Lady Falcons won seven of the next nine points to force a deuce. Tied at 25, Jema Galanza scored off a well-timed block on Marian Buitre. Paat then served a short ball that landed right in front of two Lady Maroons to seal the set.

The lead again see-sawed for the majority of the third set until it finally rested with the Lady Maroons. Forging a five-point lead, 20-15, after three Adamson errors and two UP kills, UP almost let the Lady Falcons back in the set. The Lady Falcons went on a 3-0 spurt led by Galanza and Paat, causing a UP timeout. UP, however, refused to surrender another big lead and came to their senses immediately. Rookie Isa Molde finished crucial plays down the stretch to bring UP to a 2-1 setd lead.

The Lady Falcons fell apart in the final set, coughing up double-digit errors. Every time Adamson made a run at the UP lead, they stomped out their own fire with silly errors.

Molde towed the Lady Maroons with 23 points, while Kathy Bersola and Nicole Tiamson had 11 and 10 markers each.

Jema Galanza fired in 25 points while Mylene Paat tallied 23. Both Lady falcons were the only ones with significant offensive contributions. Adamson also tallied 32 errors to UP’s 23.

Garcia, Phoenix shoot the lights out to bury NLEX