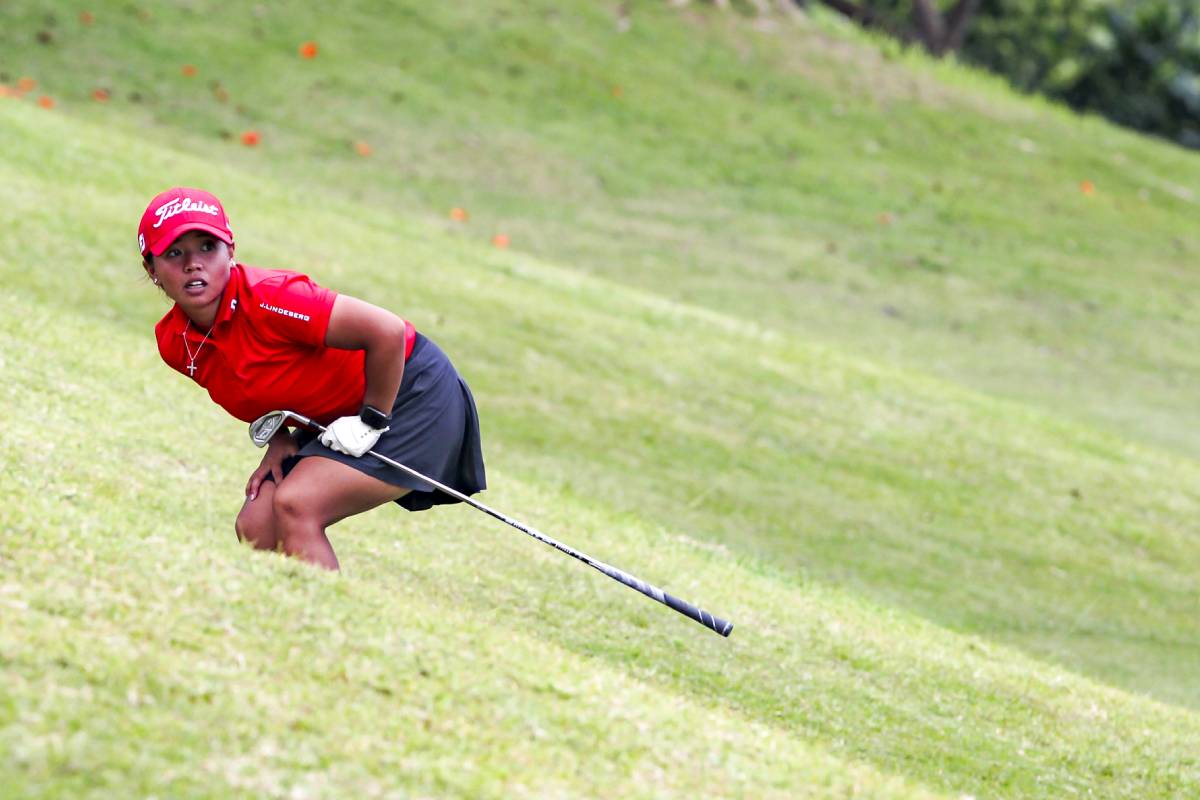 SILANG, Cavite—Harmie Constantino proved a lot better than the rest in an exacting day at Langer, taming the challenging par-71 layout with a 70 to wrest a three-stroke lead over Chihiro Ikeda after 18 holes of the ICTSI Riviera Ladies Championship here on Wednesday.

Constantino showed grit and poise in tackling the hazard-laden layout and upstaging the other bidders, seizing control with a birdie on the first hole and staying in command despite a two-bogey, one-birdie game in the next 13 holes. She birdied the par-5 16th to spike a pair of 35s and gain a big opening round cushion in the 54-hole championship held under bubble setup and strict health and safety measures.

“I played pretty steady although I missed a couple of short putts,” said Constantino, seeking a third victory in her rookie pro season after sweeping the Eagle Ridge-Aoki legs last March and five weeks ago.

She actually missed making it last week after squandering a second round lead and ending up tied at second with Ikeda at the adjacent Couples course. But with a fine showing coupled with her rivals’ shaky starts, the former national champion could be on her way to sustaining her dominant run in the Pilipinas Golf Tournaments, Inc.-organized circuit put up by ICTSI.

“Try to make fewer mistakes as much as possible,” she added when asked of her game-plan in the next two days.

But Ikeda is right behind at 73, a 38-35 round marred by a double bogey on No. 9 and two three-putt miscues against a tap-in birdie on par-5 No. 5. But the Fil-Japanese, who tied for second in the last two Ladies Philippine Golf Tour stops at Highlands and Couples, birdied the first two holes at the back to close in on Constantino, only to reel back with another missed green mishap on the 14th.

“I thought I scored higher, so a two-over card is quite okay on this course,” said ikeda.

Daniella Uy stayed within reach despite a double-bogey on the fifth hole as she birdied Nos. 8 and 14 against two more bogeys. But the former Junior World champion still in search for an LPGT breakthrough bogeyed the last hole to fall to third with a 74.

“I struggled with my tee shots, but hopefully, I’ll settle down tomorrow (today) and hit more fairways,” said Uy, who double-bogeyed No. 5, gained a stroke on the eighth but bogeyed Nos. 11 and 12. She, however, hit a chip-in birdie on No. 14 but yielded the stroke on the last for a 36-38.

Chanelle Avaricio, who sizzled with a birdie-eagle feat in the final round at Couples to dominate last week for her first pro diadem, struggled trying to recall her form, hobbling with four bogeys at the front and dropping two more strokes against a birdie in the last nine holes. She wound up with a 76, six strokes off Constantino.

While Constantino, Ikeda and Uy lived up to the hype, amateur Mafy Singson, who figured in the title chase the last three tournaments, faltered big-time, making the turn at 40 blemished by a double bogey on No. 4 and finishing with a far worse 45 marred by a triple bogey on No. 11 and a double bogey on the last. The three-straight low amateur winner wobbled with an 85 and fell to 14th, 15 shots off the pace.

Sarah Ababa, a former LPGT leg winner, and Marvi Monsalve matched 77s while Highlands leg champion Sunshine Baraquiel recovered from a frontside 42 with two birdies against two bogeys at the back for a 78.

Arnie Taguines matched that seven-over card on a pair of 39s as she grabbed the lead in the low amateur race she ruled at Eagle Ridge Norman last July with Singson too far behind and Eagle Ace Superal groping for an 85.