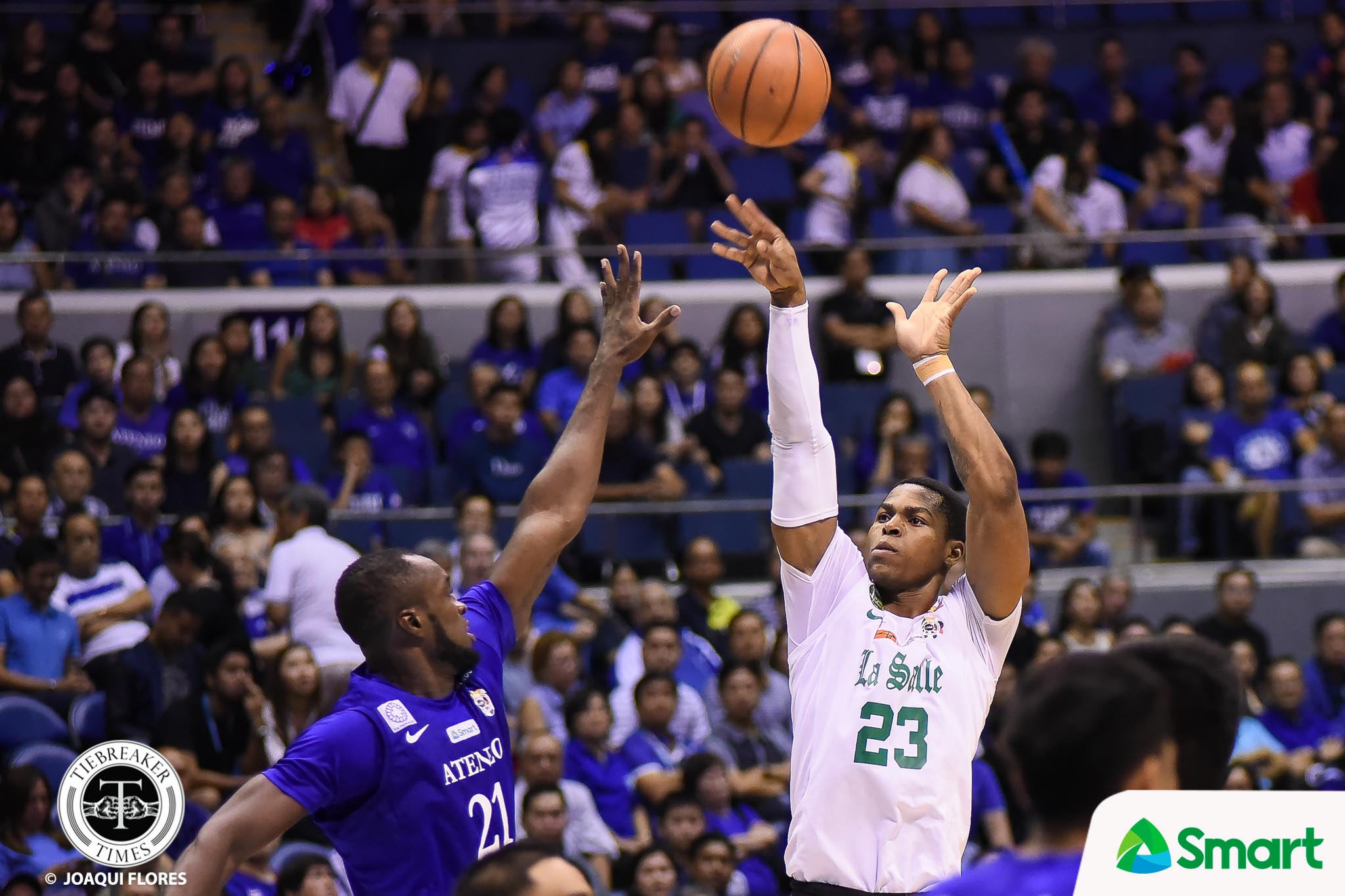 Scoring 28 points in a 10-of-20 field goal shooting, on top of 19 rebounds, six steals, and six blocks, the reigning MVP helped the Green Archers reign supreme, 79-76, and halt the Ateneo de Manila University Blue Eagles’ bid for a 14-0 elimination sweep.

Dominant on both ends of the court, Mbala was able to snag the last Chooks-to-Go/SMART Sports-UAAP Press Corps Player of the Week recognition, besting UP captain Paul Desiderio, UST slotman Steve Akomo, and FEU sniper Arvin Tolentino for the weekly individual award given by scribes from the country’s national broadsheets, tabloids, and online portals.

The Cameroonian bruiser’s worth for La Salle cannot be overstated as he kept the ship afloat despite La Salle falling behind by as much as 12 points in the fourth quarter and by seven, 69-76 in the final 2:24.

“We just wanted to win. We didn’t quit. Coach told us, never give up,” he said.

With coach Aldin Ayo fuming on the bench, Mbala and the rest of the Green Archers buckled down to work and finally solved the puzzle that was the Blue Eagles. They staged a killer 10-0 finishing kick, before Mbala delivered the exclamation point — a game-saving defensive stop on Isaac Go with 10 seconds left on the clock.

“Coach told me to never quit on defense, to just always be there and try your best to give him the hardest shot he can have, and that’s what I tried my best to do,” he said.

“He told me to stay composed and not overdo everything. I was trying to jump straight up and that’s the only thing I was able to do, because if I foul him, that would have been two easy free throws,” the 22-year-old added.

Mbala’s herculean efforts allowed La Salle to sweep the second round and wind up with a 12-2 slate.

The Green Archers, armed with a twice-to-beat advantage, now proceed to the Final Four, where they will meet third-seed Adamson University Soaring Falcons starting on Saturday and inch closer to their title retention quest.

“That’s the plan to do for the next few games: to play hard and leave the rest to God.”

Eyes are dry at the last goodbye: The unbeaten legacy of Bianca Carlos