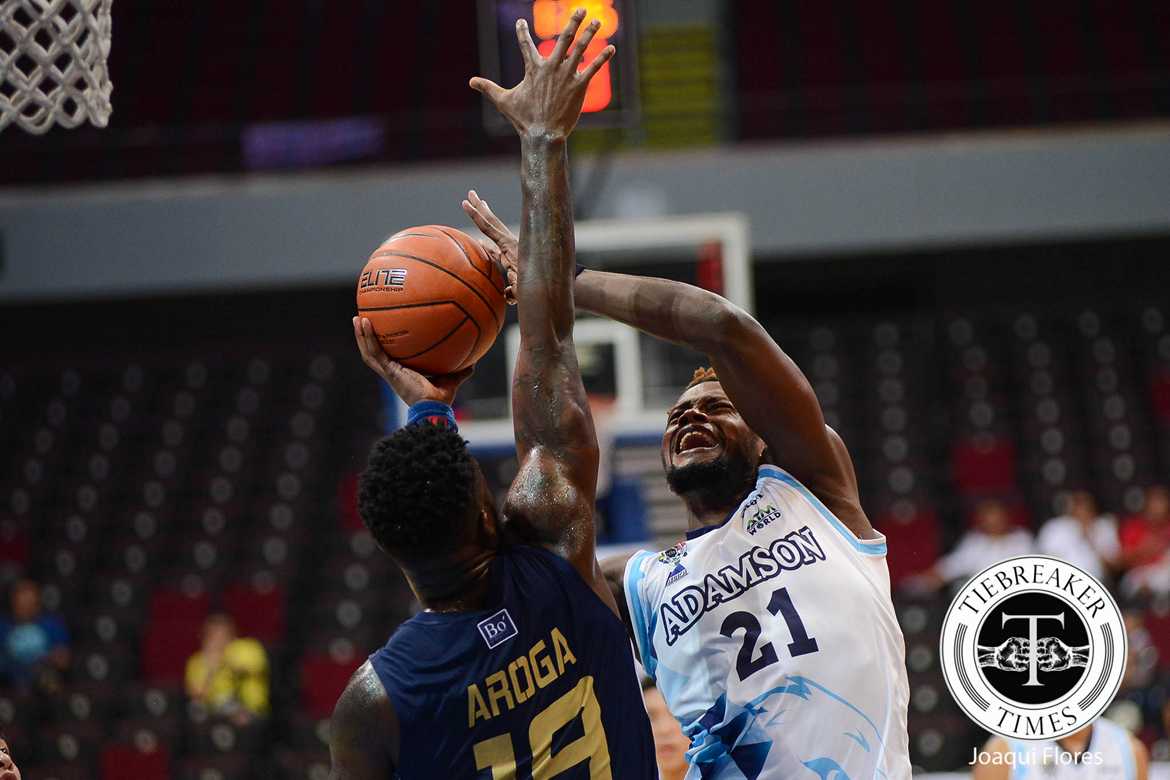 The Adamson University Soaring Falcons have notched their biggest win of the season so far.

After shocking the Ateneo Blue Eagles, the cagers fro San Marcelino gave National University a dose of their own medicine, grinding out the Bulldogs in a 64-51 win, Wednesday evening at the SM Mall of Asia Arena in Pasay City.

“Slowly, we are showing a little bit of maturity and character. Coming into the game, people scouted as a Jerrick Ahanmisi, Rob Manalang, and Papi Sarr team but this time the bench contributed,” Adamson head coach Franz Pumaren said about the 30 points his bench had produced against the Bulldogs.

Papi Sarr led the Falcons with 13 points and 17 rebounds, but had to sit out the majority of the final frame due to foul trouble. Kristian Bernardo more than stepped up for Sarr, finishing the game with seven points in just seven minutes of action – all in the final frame.

With NU holding a 45-44 lead with 7:11 remaining in the game and with Sarr sitting, Bernardo sparked Adamson’s fightback – scoring off a bullet pass from Ahanmisi. The big man was able to follow this up with three minutes remaining after a huge three-point play to give Adamson a 51-47 edge. Bernardo capped his game with a put-back off a a miss to retain the lead for Adamson with 2:31 left.

“Bernardo made me really look good out there. He was the game-changer, scoring seven down the stretch,” Pumaren said about the sophomore big man.

On the other hand, the Bulldogs struggled on the floor. Matthew Aquino missed a wide open layup late in the third frame that could’ve tied the game entering the final quarter.

And it was just a sign of things to come for NU in the final frame.

The Bulldogs were then plagued by turnovers in the end game, three coming from J-jay Alejandro in the final two minutes of the game.

“Even I am surprised with the maturity they displayed. They did not run away from the challenge and we kept our poise,” Pumaren added.

The win sends Adamson to solo second in the standings, a possibility that had never crossed Pumaren’s mind entering the season.

“If you told me by the start of the season that we will be in second place, I’ll tell you that you are just pulling my leg,” he joked.

The Bulldogs were just 30 percent from the field compared to the 44 percent shooting of the Falcons. Moreover, they were out-rebounded 44 to 35.

Alfred Aroga was the only Bulldog in double-figures with 17 markers on a 7-of-18 shooting clip. He grabbed 13 rebounds as well.