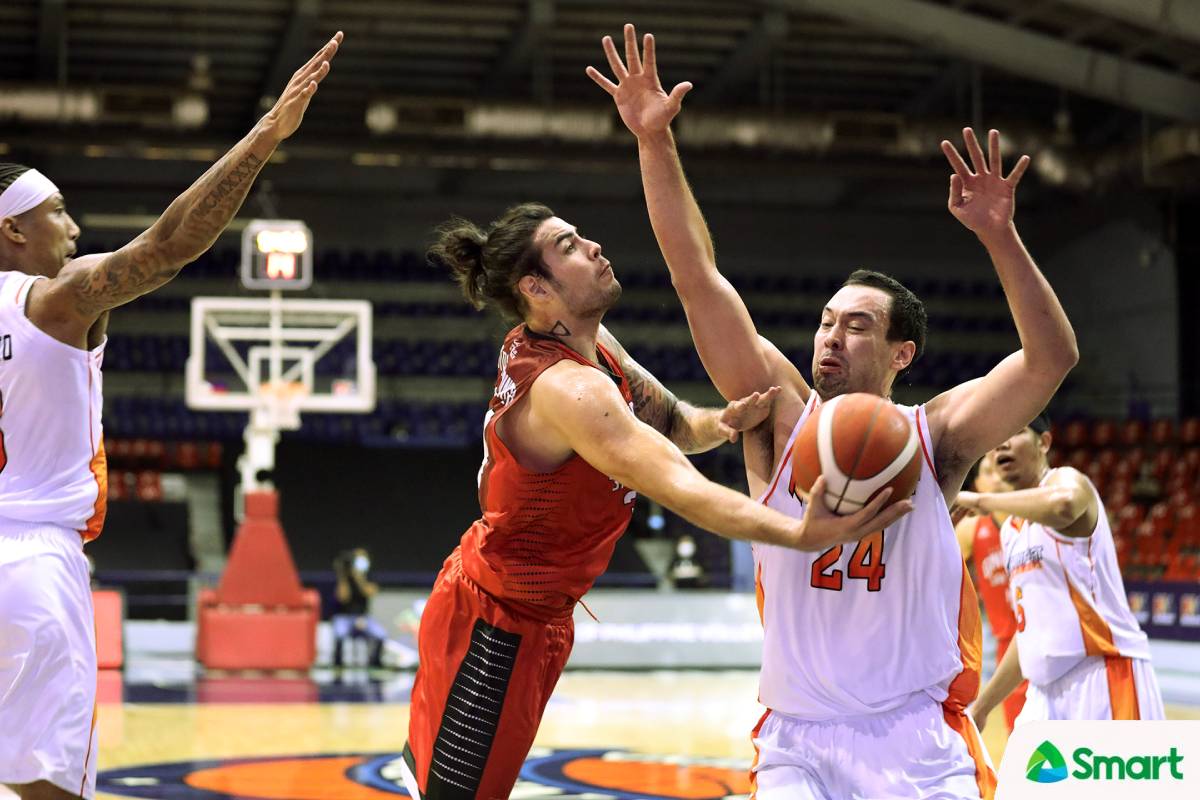 Christian Standhardinger came up clutch as Barangay Ginebra San Miguel survived NorthPort, 87-85, to get back to their winning ways in the Honda PBA Philippine Cup 2021 Friday evening at the Ynares Sports Center in Pasig.

The Fil-German bruiser put back reigning BPC Stanley Pringle’s air-balled shot off a drive as time expired to complete the Gin Kings’ spirited comeback from a sluggish start that saw them trail by as many as 13 points.

Standhardinger finished with 13 points and 12 rebounds in a turnover-less outing versus his former team as the reigning champions improved to 2-2.

“He kept running down the floor, he was down there with Japeth on the block, but yet he came all the way back down the floor and within seven seconds, got that offensive rebound and put it in for the win,” said head coach Tim Cone.

That shot of the former BPC capped off a wild sequence that saw both teams try to regain the upper hand in the dying seconds. Pringle looked to take advantage of the chance, but rookie Jamie Malonzo stole the ball away.

The 6-foot-6 wingman sprinted onto the other side and tried to score, but Japeth Aguilar was there to swat his shot. The Gin Kings regained possession, and Pringle once again tried to take matters into his own hands.

He hoisted up a shot with around three seconds left but the ball did not hit the rim. Fortunately for him, Standhardinger was there to clean up his miss, and there was no doubt that he made it in time–much to Ginebra’s delight.

“When Malonzo was in that breakaway layup, it looked pretty bleak and looked like we were gonna lose the basketball game. But then Japeth hustles down, comes out of nowhere, and blocks the dunk,” recalled Cone.

Pringle top-scored for the Barangay with 24 points, alongside five rebounds and two assists. LA Tenorio had 20 points, seven dimes, and five boards, while Aguilar finished with 15 markers and eight boards.

Tenorio hit big triples down the stretch, including one that was followed up by an Aguilar bucket to push their lead to seven, 85-78, with 2:03 to go, their biggest lead of the ball game after playing catch-up since the start.

But then, that lead evaporated as Robert Bolick willed the Batang Pier, and the game was eventually tied at 85-all following Sean Anthony’s free throws with 31.4 seconds left that set up the thrilling finish.

“The team knows it, the coaching staff knows it, the fans can obviously see it — we’re just trying to find ways to win it. We were lucky we found a way to win tonight,” said Cone, as Ginebra was coming off a loss to Magnolia.

Bolick led NorthPort with 23 points, four rebounds, four assists, and a steal in the loss that dropped their card to 1-3. The Batang Pier previously lost to San Miguel, 86-88, after a last-second shot by Arwind Santos.

Greg Slaughter had 16 points and 14 rebounds as he met his former team for the first time since being traded in the offseason for Standhardinger. Another former Gin King Jerrick Balanza made 14 points.