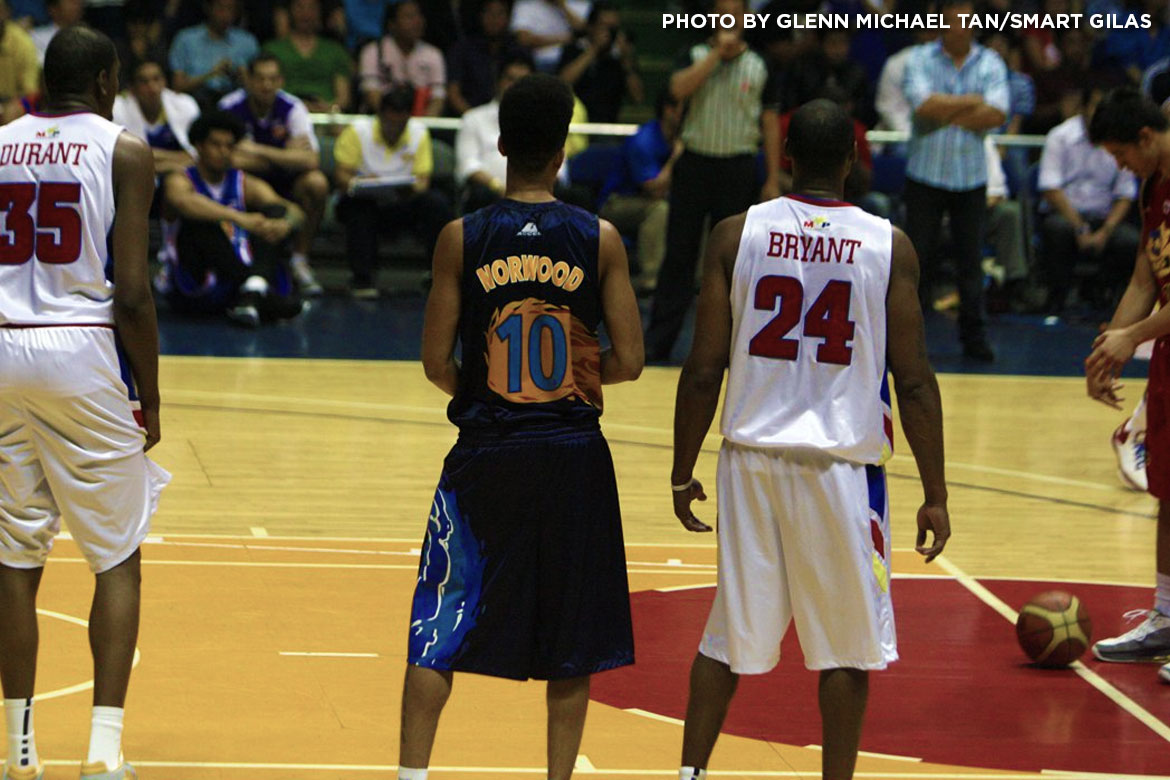 Gabe Norwood was just in his third season as a pro when he was included in the 16-man all-PBA squad that took on Kobe Bryant and other NBA stars in the Ultimate All-Star Weekend back in 2011.

It has been eight years since then, but Norwood — just 26 at that time — is still in awe whenever he recalls that game, where he also got to play against Kevin Durant and James Harden.

“First and foremost, the event itself was crazy,” admitted Norwood, now 34.

“To have Kobe there, to have the KDs, the James Hardens, and those guys, it was just an awesome experience.”

But of course, the main attraction of that team was Bryant himself. And for Norwood, he will always remember how it felt going face-to-face with the five-time NBA champ and 2008 MVP.

“The whole environment was boisterous. He had a lot of fun in there. It was kinda like an All-Star Game type of setting,” Norwood recalled of that game that filled up the SMART Araneta Coliseum.

“So, you had the Highlight Kobe, and you also had the okay-post-me-up-I’m-gonna-try-to-get-a-bucket Kobe. It was a cool balance of show and competition that I will always remember.”

But if there’s one moment of that game that will forever remain with Norwood, it was when he and PBA legend Danny Seigle sat along the baseline with Bryant during a break and had a chat.

According to Norwood, they talked about their common denominator: all of them had tasted success in Pennsylvania, as they all won state titles during their high school years there.

Bryant gave Lower Merion High School the state championship in 1996, before declaring for the NBA Draft of that year. Norwood, on the other hand, won his own title seven years later.

“You build this kinda common bridges in the game of basketball. Myself, Kobe, and Danny Seigle, at that time we’re all sitting there talking. We all won high school championships in Pennsylvania.

“Granted, definitely some years in between, but it was just a cool little bond even if it’s for a short moment. Just to have that conversation, for him to go back and forth, he was like a PBA player, not an NBA player. He brought himself down to our level. It was pretty cool,” he furthered.

There’s actually a photo of the three together. Norwood posted it Monday through his Instagram Stories.

He posted it as his way of paying respects, on Monday morning (Manila time) Bryant, along with daughter Gianna and seven others, were killed in a helicopter crash in Calabasas, California.

The unfortunate news made the world stop turning the moment it came out. Norwood is among those shocked, but he only remembers Bryant and his lasting impact in the game.

“Whether you’re an NBA player, or you’re playing overseas, or college level, you just love the game,” he said.