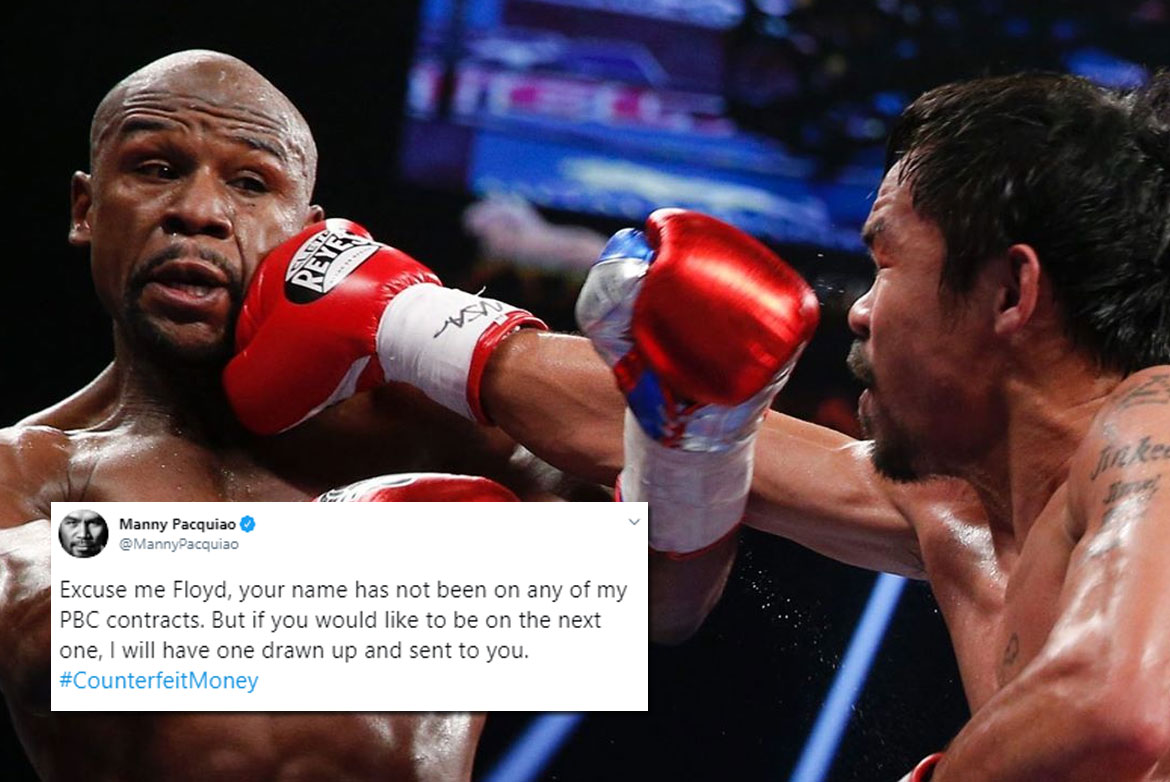 During Manny Pacquiao’s glorious win over Keith Thurman last Sunday (Manila time) at the MGM Grand Garden Arena in Las Vegas, there was one special member of the audience at ringside.

Pacquiao’s arch-rival Floyd Mayweather himself was in attendance..

Mayweather cut an animated figure at ringside while Pacquiao and Thurman figured in a bout-of-the-year candidate.

After Pacquiao eked out a split decision win to win the WBA Welterweight Championship, talks about a sequel to the Fight of the Century lit up once more. Then three days after the bout, Mayweather – who has retired from the game – had had enough, going on a rant on Instagram.

“I find it really ironic how every time Pacquiao’s name is brought up in the media, my name is always attached to it. This man’s entire legacy and career has been built off its association with my name and it’s about time you all stop using my brand for clout chasing and clickbait and let that man’s name hold weight of its own,” Mayweather’s post at around 8:00 am (Manila time) read.

“For years, all you heard was that, ‘Floyd is afraid of Manny Pacquiao.’ But what’s funny is, when we finally fought, I won so easily that everyone had to eat their words!” Mayweather continued about his unanimous decision win over Pacquiao back in May 2, 2015.

Mayweather would go on to bring the race card, saying that the pundits could not believe that a “black, high school dropout” broke the record of the legendary Rocky Marciano.

“My take on all this bullshit is that y’all are just upset that I broke Rocky Marciano’s record and hate the fact that a Black, high school dropout outsmarted you all by beating all odds and retiring undefeated while maintaining all my faculties simply by making smart choices and even smarter investments,” said Mayweather, who has an immaculate 51-0 record.

“Ultimately, I will always have the last laugh!”

It did not take long for boxing’s only eight-division champion to respond to Mayweather’s claims, saying that no one invited Mayweather to watch his fight.

“You come to my fight and then use my name in a post but I’m the one that is trying to stay relevant?” Pacquiao replied on Twitter.

“If you want to be relevant again… #MayPac2.”

Two hours after Pacquiao’s reply, Mayweather claimed that he was there as a “business partner” to Al Haymon’s Premier Boxing Champions series. Haymon was an advocate of Mayweather during his days as a fighter.

“Let’s stick to the facts! Bob Arum is no longer your promoter, so when it comes to Mayweather Promotions and PBC events I’m the Head Nigger in Charge!

“Bottom line, I make more money than you. I beat you, then I signed you! I was only at your fight supervising you, my employee, as any real BOSS would do,” Mayweather said on Instagram.

Mayweather then bragged about how much he made during his exhibition bout last December 31 for Japanese promotion Rizin. Mayweather made USD 9M for the bout, while Pacquiao, according to him, made USD 10M for his fight against Thurman.

“Remember, you fight because you have to, I fight when I want to!”

Not to be outdone, Pacquiao responded at around 8:00 pm, saying that Mayweather is not a proprietor in PBC. Then he threw down another challenge to his foil.

“Excuse me Floyd, your name has not been on any of my PBC contracts. But if you would like to be on the next one, I will have one drawn up and sent to you,” said the Fighting Senator.

And it looks like this social media war will continue for the next few days.

In this article:Floyd Mayweather, Manny Pacquiao