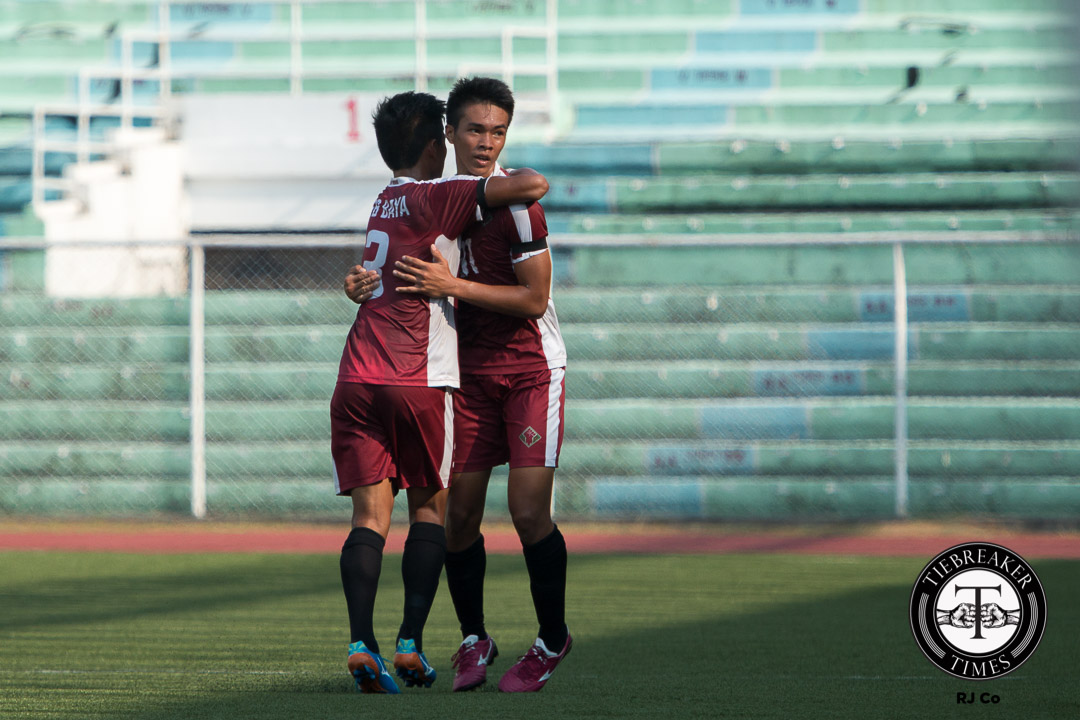 By overcoming the UST Growling Tigers, 3-0, Thursday afternoon at the Rizal Memorial Football Stadium, the UP Fighting Maroons march on to the final for the fifth time in the last six editions of the UAAP men’s football tournament.

It was a well-deserved victory for UP who  asserted their dominance from the get go. The Fighting Maroons had the lion’s share of possession and they made the most of the advantage throughout the opening half. The trio of Daniel Gadia, Kintaro Miyagi and Kyle Magdato were on the thick of things as they often connected in unlocking the UST defense.

In the first five minutes, Gadia twice threatened the Growling Tigers with his off-ball movement. On both occasions, the Tomasinos managed to prevent him from making any damage. If the UST defense didn’t let him get to the dangerous area, Gadia made sure that he would still be a vital figure in the encounter. In the 15th minute, he set up Miyagi. The rookie got a touch to it but it was not meaningful enough to bother Zaldy Abraham on the UST goal.

UP kept pressuring the UST defense, which nearly crumbled a minute after. Kyle Magdato won the ball from the helpless Abraham. With the goal gaping, the freshie winger aimed to send the ball into the empty net. His shot went off the mark, leaving the Tigers to clear the ball away. Chances kept on coming as Miyagi had a good header from Soheil Bidar’s cross just sailing wide.

It served as a warning sign UST did not seem to grasp as the succeeding chance punished them.Armed with the ball, Gadia sprayed a brilliant pass towards Magdato 23 minutes into the knockout game. Magdato did not waste the chance this time as his strike sneaked past Abraham to give UP the advantage.

Down by a goal, UST almost restored parity two minutes later. UP goalkeeper Ace Villanueva’s errant clearance invited Ronald Batisla-ong to get the ball and hit it into an unguarded net. Unfortunately for the Tigers’ talisman, he wasn’t able to do anything to the loose ball eventually cleared by the Fighting Maroons. That was the closest the Tigers could get from scoring as Coach Anto Gonzales’ charges resumed the attacking barrage.

At the 35th minute, Feb Baya sent a cross towards Miyagi, who squandered the chance when he didn’t get to control the shot. He made up for the mistake two minutes later by finishing off a lovely attacking sequence. Gadia placed an elegant lobbed through pass which was then picked up by the UP striker. Beating the offside trap, Miyagi looped the ball over Abraham and into the goal to double the Fighting Maroons’ lead. It stayed that way come half time, putting UP in a commanding position in the tie.

After the break, UST huffed and puffed but UP remained in control. The Tigers’ pursuits on goal were easily broken down while the Maroons occasionally advanced to peg back their foes. It nearly was 3-0 at the 62nd minute. Magdato’s shot from close range was kept out by Abraham. The resulting corner also had UST on their toes when Gadia’s attempt cleared from a scramble was kept off the line.

As time winded down, UST ventured forward with Batisla-ong on the scene twice. The veteran had possession inside the box and was felled down, but the referee wasn’t satisfied to hand a spot kick. A few moments later, Marvin Bricenio delivered a cross towards Batisla-ong who was not able to head it with conviction. Villanueva picked up the ball with ease, seemingly fresh with nothing much to do in the game.

As the Tomasinos looked like they’d given up, UP’s Gadia had the appetite to sprinkle the game with a goal of his own. The midfielder had a great day already with two key assists, and nearly got one for himself when he rounded past Abraham and hit a shot on target. John de Castro didn’t let him do just that though, as he booted the ball off the line.

It may not have been Gadia’s goal in the end, but the Fighting Maroons picked up a third goal eventually in added time. Rvin Resuma slotted the ball unopposed after winning the ball from the wrong-footed Abraham. It punctuated a glorious day for UP who have now made the finals for the fifth time in the last six seasons.

“Compared to last year, I think we’re quite consistent in terms of performance, in terms of play, in terms of fight,” remarked Gonzales. Aware that the young players scored the goals, the coach attributed the rookies’ rise to the team’s chemistry. “The younger players know that they’re free to show their creativity. They’re free to show what they’re really capable of. Kung magkamali man sila, sinasalo sila. The older players also play a bigger role,” he stated. One win away from winning a championship last won in Season 74, Gonzales wishes his team to control the tempo of the game at all times.

With the result, they now await the winner of DLSU and ADMU who are playing in the other semifinals tie as of posting time.